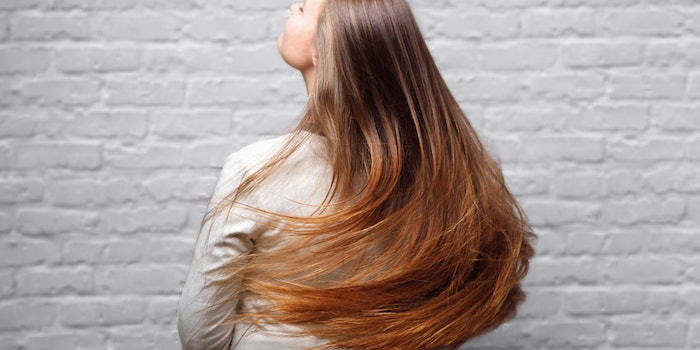 Several studies have been published on the substantivity and penetration of fluorescein isothiocyanate (FITC)-labeled proteins and protein hydrolyzates into human hair using fluorescence microscopy1, 2 or fluorescence laser scanning confocal microscopy (LSCM).3, 4 The latter method provides a new dimension of hair fiber observation and diagnostic perspective, as will be shown, due to its significantly higher resolution than classical microscopy, which locates penetrated labeled proteins more precisely.

For decades, protein hydrolyzates, in particular those with low molecular weight distribution—i.e., < 1,000 dalton—have been known to provide efficient hair protection and care. They are used as active ingredients with proven reparative, conditioning, combing, volumizing, strengthening, softening and vitalizing benefits, among others, for the hair and scalp.2, 4, 5 High molecular hydrolyzates in the range of 50,000 dalton and higher leave a protective film on skin and hair whereas medium molecular weight hydrolyzates absorb mainly at the surface but can also penetrate the cuticle. If the protein is hydrolyzed to an oligopeptide <1,000 dalton in size, it then becomes able to penetrate the cortex.

Some years ago, the penetration hydrolyzate (INCI: Hydrolyzed Wheat Protein) again of a low molecular weight, i.e. <1,000 dalton with a peak 500 dalton, was studied by the authors using standard fluorescence microscopy on hair. Moreover, some cosmetic benefits of hair treated with hydrolyzed wheat protein, such as hair fiber strengthening and reduction of hair breakage, were reported.2 Now completing this assessment, the authors visualize the penetration of FITC-labeled protein hydrolyzate on different hair types using confocal laser scanning fluorescence microscopy in two dimension, but also with a new three-dimensional approach.

The described penetration studies were carried out on normal, human, light brown Caucasian hair and on Caucasian hair previously damaged by bleachinga, as well as on normal and relaxed African-American hairb. The labeling and separation of labeled hydrolyzed wheat protein were performed independentlyc and images were acquired using a fluorescence microscoped.

Small hair swatches consisting of 30 fibers, each 4 cm long, were soaked for 30 min or 24 hr in either a 0.1% aqueous solution of FITC-labeled protein for cross-sectional observation, or a 0.5% aqueous solution of FITC-labeled protein for entire fiber observation; these concentrations correspond to 0.4% and 2.0% of a commercially available producte, respectively. The hair was then rinsed twice in 250 mL of water for 10 sec, then blotted dry and stored overnight in a desiccator in the dark.3

To make microscopic observations, hair bundles were frozen at -20°C and cross-sections of the hair fibers were observed via laser scanning confocal microscopy after cryo-embedding and cryo-sectioning (10 µm) the samplesf. The hair sections were mounted in an oil medium and observed at an excitation wavelength of 488 nm using incident light microscopy filter 488/453, and the emission fluorescence was detected within the range of 502–520 nm selected on a photomultiplier detector.

Whole hair fibers were observed after excitation by 488 nm and 633 nm using incident light microscopy filter 488/453/633. Under these conditions, the penetration of labeled protein into the hair fiber and hair fiber cuticle cells could be visualized simultaneously. To improve fluorescence recovery from the deeper parts of hair fiber, the image was acquired using the interpolation of brightness and contrast on the z axis.

Laser scanning confocal microscopy is a technique for obtaining high resolution optical images with depth selectivity (see Figure 1). The key feature of confocal microscopy is its ability to acquire images that are in focus from selected depths, a process known as optical sectioning. Images are acquired point-by-point and reconstructed by a computer, which allows for three-dimensional reconstructions of topologically complex objects. For opaque specimens, this technique is useful for surface profiling while for non-opaque specimens, interior structures can be imaged.

In a confocal laser scanning microscope, a laser beam passes through a light source aperture that is then focused by an objective lens into a focal volume within or upon the surface of a specimen. In biological applications especially, the specimen may be fluorescent. A beam splitter separates a portion of the light into the detection apparatus, which in fluorescence confocal microscopy will also have a filter that selectively passes emission wavelengths while blocking original excitation wavelengths. After passing a pinhole, the light intensity is detected by a photodetection device such as a photomultiplier tube, transforming the light signal into an electrical one that is recorded by a computer.

The detector aperture obstructs light not originating from the focal point. The out-of-focus light is suppressed, i.e. blocked by the pinhole, which results in sharper images than those produced by conventional fluorescence microscopy techniques. This further enables researchers to obtain images on planes at various depths within a sample; such sets of images are known as z stacks.6

The penetration of FITC-labeled protein into the different types of hair is illustrated in the cross-sections in Figure 2, Figure 3, Figure 4 and Figure 5. For each treatment condition, the untreated control hair also is presented. It should be noted that the fluorescence marker may not be the only source for light emission in the hair sample. Also, some hair keratin amino acids, specifically tryptophan, show a fluorescence effect after excitation at 488 nm and this effect is stronger in bleached hair. Thus, it is essential to compare treated hair to untreated hair under the same conditions of illumination and detection.

From the images obtained for the different hair treatments, it is obvious that the FITC- labeled peptide is mainly localized on the endocuticle with some additional penetration into the cortex. On the control Caucasian hair, the FITC-labeled protein is localized predominantly in the endocuticle level after the short treatment protocol. The penetration appears to be deeper with the longer treatment time. Generally, the longer is the contact, the higher the penetration (see Figure 2).

The baseline images on bleached hair show a higher level of fluorescence, compared with non-damaged control hair. The short time treatment also shows fluorescence accumulation in the endocuticle while the 24-hr treatment with the aqueous solution of labeled protein showed moderate to intense fluorescence on the hair fiber periphery, and also some deep penetration into hair fibers (see Figure 3).

A nice effect of the influence of the longer duration treatment was observed on the control African-American hair. The fluorescence intensity on the cuticle level was higher after the 24-hr treatment compared with the 30-min treatment. The progressive penetration into the hair fiber was clearly visible (see Figure 4). The deep penetration of FITC- labeled protein into the hair fibers also was observed on the African-American hair damaged with a relaxing product, especially with the longer treatment protocol. The deep penetration is reflected by high fluorescence intensity all over the hair fiber (see Figure 5).

Generally, the penetration of protein was higher in the damaged hair than in non-damaged hair, and was higher in African-American hair than Caucasian hair; in both cases, the penetration increased with the duration of the treatment. A three-dimensional representation of the protein penetration into hair is shown in Figure 6. The acquired optical longitudinal sections in Figure 6a were reconstructed by appropriate software. Different views are presented; the maximal projection is the assembly of all stacks with a clear difference between non-damaged hair treated with labeled protein, and bleached hair treated with labeled protein, as shown in Figure 6b.

Moreover, the separation of fluorescence observed after the excitation at 488 nm, i.e. emission 505–30 nm, and 633 nm, i.e. emission 644–770 nm, allows for the visualization of the cuticle by a transparency effect (see Figure 6c). Stacking the images into a complete three-dimensional presentation makes it possible to view the progressive penetration into the hair fiber from the surface to the bottom. Further, the selected interpolation process allows researchers to obtain a fluorescence signal within the whole thickness of the hair fiber and its presentation from different angles (see Figure 6d).

Fluorescence laser scanning confocal microscopy represents an excellent tool to demonstrate the substantive effect for hair care active ingredients labeled with a fluorescent marker. This technique makes it possible not only to observe the absorption of FITC-labeled protein into the hair cuticle, but also to detect the penetration into hair fibers by creating optical sections and reconstructing them as a three-dimensional image. This noninvasive technique offers possibilities for the exploration of the linkage and penetration of hair care active ingredients into hair fibers, thus enabling product developers to optimize hair care formulas of the future.

Acknowledgments: The authors wish to acknowledge Nathalie Andrès, for her skilled microscopic work; Marie-Danielle Vazquez-Duchêne for her technical drawings; and Deutsches Wollforschungsinstitut (DWI) of Aachen, Germany, for its protein labeling.

a Caucasian hair was obtained from Fesnoux-Sécher, Paris.