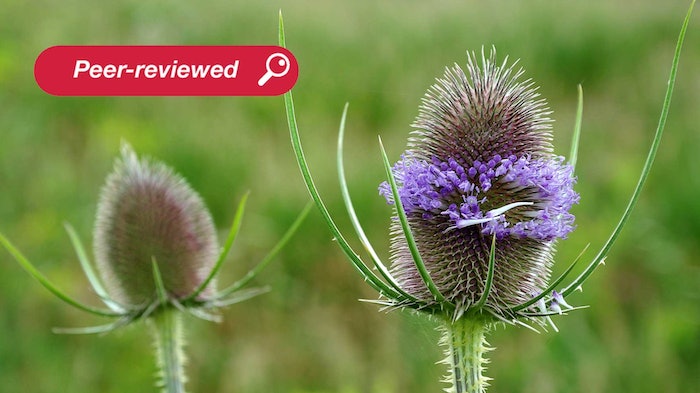 Studies have demonstrated that wild teasel could be a natural source of bioactive compounds, particularly phenolics and iridoids, and have confirmed its high potential for the cosmetic industry. For example, teasel features strong antioxidant activity, especially in leaf extracts

Dipsacus sylvestris Huds is considered by botanists as a nomenclatural synonym of Dipsacus fullonum L. Commonly referred to as wild teasel, cardère sauvage, cabaret des oiseaux or baignoire de Vénus, this species belongs to the Caprifoliaceae family. Studies have demonstrated that wild teasel could be a natural source of bioactive compounds, particularly phenolics and iridoids, and have confirmed its high potential for the cosmetic industry. For example, teasel features strong antioxidant activity, especially in leaf extracts.1

The Dipsacus genus contains approximately 20 species, whose native range extends across Europe, Asia and North Africa.2 Its extracts could be composed of a mixture of different parts of the plant, or contaminated with other species (i.e., D. laciniatus) that induce adulterations and decrease the efficiency of the final active ingredient. It is therefore important to ensure the traceability of the raw material to guarantee the reproducibility of substantiation studies conducted with the original extract.

Today, the quality control of natural products and raw materials is mostly made with botanical — i.e., based on the recognition of morphological characters — and chemical analysis.3, 4 It is compulsory to perform these tests to release new products on the market. For plant authentication, these types of analysis have the advantage of being affordable and most of the time, efficient. The main disadvantage is that morphological identification and chemistry can fail to precisely identify some plant species.

It is important to ensure the traceability of the raw material to guarantee the reproducibility of substantiation studies conducted with the original extract.

Indeed, to perform morphological identifications and chemical analysis, one must have entire plant organs and, in the database, a reference for the same plant part with the same level of maturation as the tested sample. Moreover, there is often only the plant species of interest in the database and closely related species are not available.

To improve these results, the use of plant DNA can greatly assist because every plant species has a specific genetic signature.5 In addition, the genetic database is a scientific worldwide database, which allows a scientist to compare a DNA sequence to large amounts of data that closely gather related species as well as known adulterants (contaminants).

The expansion of genomic resources has supported the development of specific molecular biology technology, such as the barcoding method, to find genetic profiles and the species of a sample.6 The metabarcoding method was developed to perform multiple sequences at the same time, revealing the plant composition of mixed samples and validating their traceability and authenticity.

The present study sought to authenticate and trace D. fullonum from raw material to final ingredient. It examined both D. fullonum in genetic databases and D. sylvestris as the commercial name, assessing them in a three-step study comprising: barcoding on the raw material, metabarcoding on two extracts, and bioinformatics analysis to compare both.

Plant materials: Two samples were used in the following studies: one intermediary aqueous extract (lyophilized) of D. sylvestris and a final active ingredienta. The aerial parts of D. sylvestris (see Figure 1) are extracted with hot water and filtered. Following this, this aqueous extract is solubilized into glycerin with the addition of preservatives and filtered sterile at 0.2 µm.

DNA extraction, amplification and sequencing: Several steps are necessary to access the DNA sequences from different substrates. Extraction and PCR amplification of DNA were carried out using universal primers and a well-defined protocol. The DNA concentration was measured spectroscopicallyb prior to sequencing. DNA barcoding was then performed using a first-generation sequencerc and the metabarcoding, with a next-generation sequencer (NGS)d.

Data analysis: The sequencing results were analyzed and the genetic sequences were aligned based on a bioinformatics method using Geneious software7 and GenBank6 database.

The NGS results were analyzed to identify species by comparing the sequences with the GenBank database. The results consisted of the DNA sequences and their relative amount. This allowed for the calculation of the percentage of genetic sequences coming from the different plants that are in the sample and the construction of abundance diagrams.

To identify the species in the raw material, DNA barcoding analysis was performed using two genetic markers. These markers, M1 and M2, were chosen for two reasons. First, they are universal and can be used blindly on any plant species. Second, they show interspecies differences so that the results can be sufficiently precise to reach a species level determination.

DNA was extracted from the sample and was amplified by PCR for two markers. The PCR product was sequenced using the Sanger method. Then, marker sequences were compared with the reference sequences in the GenBank database7 using the NCBI BLAST algorithm and tool.9

To trace the plant species in the extract, metabarcoding analysis was performed. As noted, an intermediary extract (aqueous extract) and final active ingredient (INCI: Dipsacus Sylvestris Extract (and) Glycerin)a were chosen to follow the DNA through the process.

The DNA was extracted from these two samples and was amplified by PCR for one specific short marker. This short marker derives from the M1 marker used for authentication but shorter, allowing for the comparison of raw material and extract sequences. The PCR products were sequenced by NGS and results were analyzed by bioinformatics and compared with the GenBank database. Results are shown in Figure 2 with relative abundance diagrams.

Findings showed the presence of DNA in both the intermediary extract and final product, whereas there was no DNA in the excipient (not shown). This proved that the plant extraction process did not damage the DNA. In addition, DNA sequences found in both samples were assigned to the Dispacus genus, confirming its presence in the extracts.

Furthermore, a low amount of Asteraceae was present in the intermediary extract, which probably accounts for pollen contamination during sampling or transport. This contamination disappeared from the active ingredient thanks to several filtration steps, down to 0.2 µm sterilization, in the production process. The results show how important it is to control the sample throughout the transformation process to ensure potential contaminations are excluded.

To show DNA traceability between samples, results from the barcoding and metabarcoding were compared and aligned by bioinformatics. Figure 3 shows a 100% identity between the sequence obtained from the raw material and the sequence obtained from both samples. Therefore, the plant DNA from the raw material could be followed to the final active ingredient for proof of traceability. This result demonstrates the importance of both techniques as proof of traceability and their utility in fraud control.

Consumers are more and more cautious about the authenticity and traceability of the plant raw materials from which their products are made. Responding to this concern, companies such as the authors’ have partnered to identify raw materials at the genetic level and ensure their traceability in the finished product.

Here, the process began with authenticating the raw material using barcoding markers, then tracing the plant throughout the extraction process using metabarcoding makers. This demonstrated the purity of the test material, and although contaminations can occur during sampling or transport by environmental pollens or other plant organs, these can be monitored using such technologies and removed. Therefore, the final product included in the cosmetic product is of high quality and purity.

Tests such as the DNA analyses described here help to address questions of authenticity and sourcing, among others. Coupled with classical chemical composition and efficacy tests, they ensure the final cosmetic ingredient and subsequently, product is reliable and trustworthy.