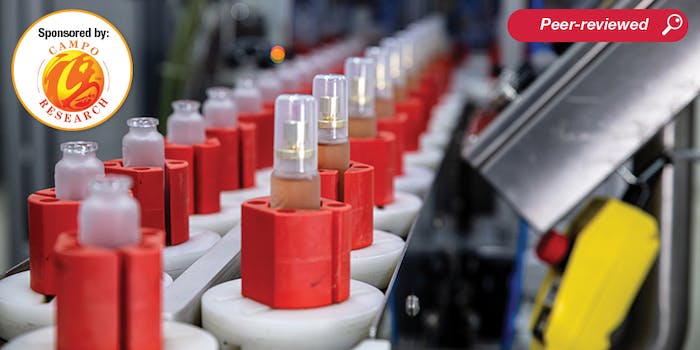 Thanks go to Campo Research for sponsoring the series.

Microbiological testing of products repeatedly detected bacteria that are native to humans. When we investigated the traffic flow of operators and microorganisms in the production area, we detected the same types of bacteria in standing water on the floor. We also found that operators touched the wetted part of the equipment after they wiped up the spilled product on the floor.

Countermeasure: We ensured that operators changed gloves and/or sterilized gloves with alcohol spray before they touched the wetted part of the equipment. We also thoroughly improved operational hygiene and the production environment, including the elimination of standing water (drying) that could become a breeding ground for microbial proliferation and transmission. Following these measures, bacteria were no longer detected in the products.

Note: Even if operators wear gloves, if they touch anything with a high concentration of microorganisms, these microbes attach to the gloves, risking product contamination. Controls such as frequent sterilization are needed.

• Problem: Specified microorganisms, e.g., Staphylococcus aureus, were detected on the doorknob of an air shower.

Numerous bacteria, including specified microorganisms such as Staphylococcus aureus derived from human skin—requiring special attention in cosmetics, pharmaceuticals, etc.—were detected on the doorknob of an air shower installed at the entrance of the production area. When we monitored operators’ hand washing before they entered the area, we found that some did not follow the defined rules. Some sprayed sterilization alcohol to their hands before drying; some dried their hands while touching the orifice of a hand dryer; etc. Also, sometimes bottles of hand-washing agents and alcohol spray were empty.

Countermeasure: We put up a poster to show the correct way to wash hands and most effectively sterilize hands and fingers. We conducted regular training for operators, described in the SOP, on how to manage hand-washing agents and alcohol in spray bottles and implemented the plan. The orifice of a hand dryer also was always wet. We thought it unavoidable that microorganisms would be blown by a dryer and/or reattached to the hands from the orifice of the dryer, so we replaced the hand dryer with paper towels.

• Problem: Numerous microorganisms were detected from operators’ hands that should have been washed clean.

Although the operator washed his hands properly and sterilized them with alcohol, numerous microorganisms were detected from his hands. We monitored his behavior and found that he touched his face, etc., after washing his hands, causing microorganisms to attach.

Countermeasure: We instructed operators to sterilize their hands with alcohol when they touched goods and/or places with numerous microorganisms.

Note: Normal bacterial flora still survive even after complete sterilization, and they grow over time. Thus, gloves should be worn. If a bare-handed operation is essential, then frequent hand sterilization is needed.

• Problem: Intermediate products with no preservative efficacy were contaminated by microorganisms.

Production was stopped after intermediate products were produced, then restarted a few days later to manufacture finished products. Following this, numerous microorganisms were detected in products. The intermediate products contained high amounts of water, and preservatives were intended to be added during the subsequent process. This allowed microbial proliferation, by the time production restarted.

Countermeasure: We stopped allowing intermediate products to sit for many hours and instead, quickly moved to the process of adding preservatives.

• Problem: Molds grew in the slurry before the molding process of powder products.

For a powder foundation, water was added for molding and the slurry was kept. Then, molds grew. The dosage of preservatives was designed to prevent secondary contamination in the final products, however. As such, the preservative efficacy in the slurry was diluted by the addition of water and too weak to store for a long period.

Countermeasure: We changed the process to make the slurry by adding water immediately before molding, which involves a drying process.

Note: It is important to take measures that do not require increasing the levels of preservatives used to prevent primary contamination; i.e., contamination during the manufacturing process.

Microorganisms exceeding the specification were detected in aerosol products. Considering how they are used, aerosol products, into which high-pressure gas is injected, have low oxygen partial pressure and secondary contamination risk is low. Therefore, for these products, a lower concentration of preservatives was designed. However, bulk products before filling that were not maintained under appropriate conditions were contaminated by microorganisms.

Countermeasure: Upon reviewing operational hygiene in the production process of bulk products, we shortened standby time for bulk products before filling, which deprived microorganisms of opportunities to proliferate.

Note 1: If contamination still occurs despite implementing sufficient measures against primary contamination, the preservative system itself should be reviewed.

Note 2: If the production and/or filling of aerosol products is outsourced to a partner company, communication about hygiene control becomes important.

Note:* The word gemba or genba is a Japanese word that refers to “the actual place or site where value is created.” In the context of this article, it refers to the holistic environment of cosmetic manufacturing, encompassing more than the facility itself. While environment will be used throughout the article, note that the true meaning is deeper. This article is adapted with permission from the original, which appeared in the Fragrance Journal (in Japanese).1