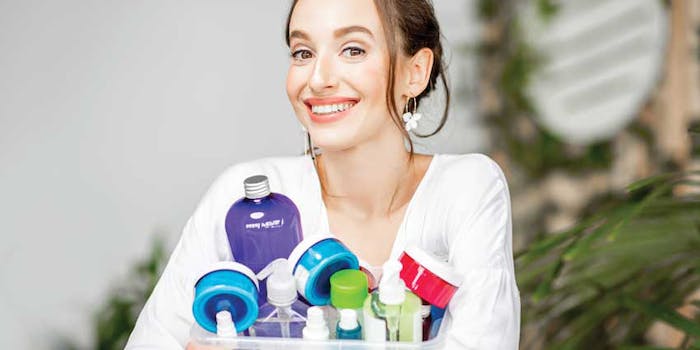 To read this article in its entirety, click through to your January 2020 digital magazine.

Several internal and external factors contribute to the aging of skin, and recognizing these factors and their causes allows us to care for it. Intrinsic aging affects not only skin, but all the organs of the body and is in large part pre-determined by our genetics. However, to delay the manifestation of wrinkles, we can concentrate on the role of extrinsic aging and develop approaches to protect skin.1

As is well-known, the skin plays an important role physiologically through protection, regulation and sensation, and has an important impact on the psychological health of an individual.2, 3 Thus, it is not only important to defend our skin from aggressors, but also to maintain our appearance for overall health and well-being.

Proper skin care helps to protect our epidermis, maintaining skin's overall hydration and supporting a healthy barrier. Keeping skin functioning and healthy is critical to our own health, and protecting, cleansing and moisturizing are the key components of an effective skin care routine to maintain the skin’s quality and integrity.

In recent times, the use of a full skin care routine is frequently recommended by brands to ensure best results and maximize the likelihood of realizing the claimed benefits. While one might expect an advanced routine to deliver stronger skin benefits, no apparent clinical investigations have been carried out to support this theory scientifically.

Providing clinically proven results is crucial to demonstrating the end benefits of skin care routine offerings.4 As such, the present authors clinically investigated the value of using two advanced skin care routines versus a simpler routine. One short-term clinical study targeted moisturization and radiance following two days of product use, and a longer 12-week clinical targeted the anti-wrinkle effects of a full skin care routine containing 1% of a natural tripeptide complex.5

As noted, two clinical studies were performed in a facility on site in Bray, Ireland. For the short term clinical of two days, a panel of 22 healthy female Caucasian volunteers with skin phototypes I–II were recruited. For this study, a split-face design was utilized, where volunteers implemented the full routine on half of the face and a simpler routine on the other half; the routines are described in the next section.

For the longer term three-month clinical study, a blind protocol was implemented in a panel of 47 healthy female Caucasian volunteers with skin phototypes I–II, all of whom had under-eye wrinkles. The panelists ranged in age from 35-51 and were split in two groups: Group A (n = 27) used the full routine (mean age = 43 years), and Group B (n = 18) followed the simple routine (mean age = 45 years). Group A finished with 26 volunteers and Group B finished with all 18 originally recruited.

Both studies were conducted under Good Clinical Practices (GCP) regulations in accordance with the Declaration of Helsinki.

All procedures involved in the study were explained in detail to the volunteers and written informed consent was obtained from all subjects. Volunteers were selected after ensuring they were not taking any medication that might influence their skin condition. All volunteers also refrained from applying anti-aging products for two weeks prior to the study start date, and applied no products to their face, including makeup, on the day of the study measurements.

Volunteers were instructed to cleanse their skin with only water prior to their visit. Volunteers were excluded from participation if: they were pregnant or lactating; they had surgery on the measurement area; they had suntanned skin, which could interfere with the study; or if a major deviation from the study protocol was highlighted during the study.

The advanced routine for both the short- and longer-term study consisted of six products and six steps, including a: cleanser, toner, serum, eye and day or night cream (see Figure 1). These are described following in more detail. The simple routine consisted of using a cleanser and day cream in the morning, with just a cleansing step at night. The simple routine utilized products from the same range as the advanced routine. Key ingredients in routines tested for short- and longer-term studies are outlined in Table 1. The short-term study was of a split face design, whereas the 12-week study comprised two groups of subjects.

As a point of clarification, the simple routine was not designed to provide the same effects as the complex one. Furthermore, the study was not designed to compare the effects of differences in application rate, usage order, etc. This study simply aimed to compare the effects of a time-conscious, simple routine with a more dedicated, comprehensive routine including steps beyond a basic moisturizer. While one might naturally expect better results with the advanced system than a moisturizer alone, as stated, no apparent in vivo data has previously substantiated this assumption.

For the short two-day clinical study, volunteers used the advanced skin care routine, targeting skin radiance and hydration, on half of the face twice daily following randomization. After an acclimation period of 20 min (21°C ± 2°C, RH 50% ± 10%), the following measurements were performed on the volunteers.

Self-assessment: Along with skin measurements, volunteers performed self-assessments regarding the performance of the routines on the second day of the study using a nine-point descriptive scale. Fifteen minutes after their last product application on day two, they reported which side of the face looked more moisturized, smooth, radiant, etc.—or whether no differences where perceivable on either side of the face.

Before and after imaging: Photographic assessments also were made using a photography systemb to capture standardized photographs of volunteers under specific lighting conditions. To make the photographs as reproducible as possible, the system utilizes a forehead rest and chin cup to position the panelists. The Standard 2 lighting mode was used to capture full face images. This setup and system enabled radiance measurementsc.

For the longer 12-week clinical study, the advanced anti-aging skin care routine involved applying a cleanser, toner, serum, day or night cream containing 1% tripeptide and an eye cream twice daily.5 The simple routine comprised using a cleanser twice daily, in addition to a day cream containing 1% tripeptide. Compliance to the application protocol was evaluated by weighing the products every two weeks and by volunteers completing an application diary at each application.

Following an acclimation period of 20 min in a controlled climate (21°C ± 2°C, RH 50% ± 10%), volunteers were seated at a facial scannerd and measurements were acquirede on one randomly selected eye at baseline and after 12 weeks of application.

Under-eye wrinkle measurements: Skin surface roughness was measuredf without contact on the temple area using 50-mm depth of field lenses. The measurement system consists of a projector and a camera unit and relies on fringe projection to collect 3D information on skin topography such as profile roughness parameters and wrinkle object parameters. The acquisitions were performed in a dark room to avoid altering the contrast between fringes. An average of 50 profile lines across an area of 20 × 20 mm was used to generate roughness values.

Self-assessment: Again, volunteers from both groups completed a questionnaire relating to facial skin using a 9-point descriptive scale. The questionnaires were completed onlineg by all panelists at baseline, before product application, and after 12 weeks of product application to the face. This technique generated data on panelist assessments of their own skin. Such evaluations reveal how subjects’ opinions over time and provide information on the benefit of the products(s) on skin.

Statistical analysis: For each measured parameter at each time point, mean values and the standard error mean (S.E.M.) were calculated, as well as percentage variations relative to baseline measurements. Changes from baseline and routines’ performances were compared with paired or unpaired t-testing where appropriate. All calculations were performed using softwareh and a significance level of α = 0.05 was set throughout all analyses.

The short-term study aimed to clinically compare the effects of using an advanced skin care routine, designed for skin hydration and radiance, with a simple routine. Even after just two days, measurable and perceived effects were apparent in skin. Regarding facial hydration, after two days, the advanced routine provided significantly better results (p = 0.000001), registering an increase in skin capacitance of 12.37, compared with just 0.05 from the day cream and cleanser routine (see Figure 2a).

Key ingredients in routines tested for short- and longer-term studies are outlined here. The short-term study was of a split face design, whereas the 12-week study comprised two groups of subjects. 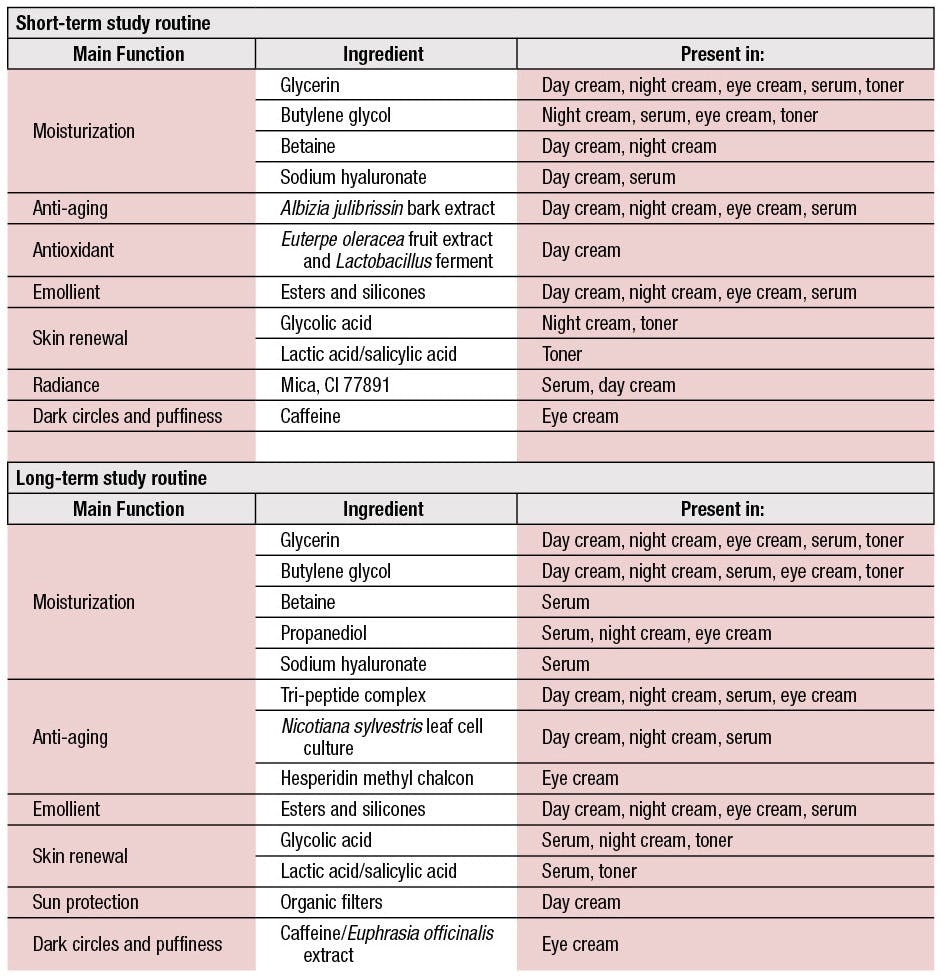