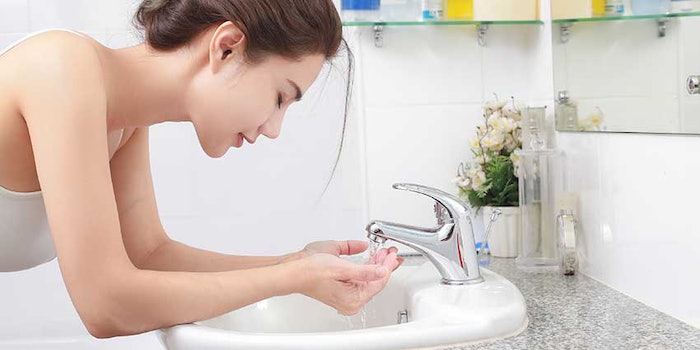 Any given personal care product makes many stops on its way to the consumer; from the laboratory, to the retail setting, etc. But the journey does not end once a product is purchased and used—trace amounts go on to enter waterways. While these initial ingredients may have proven safe, a new study suggests their partly decomposed by-products are an unknown.

Small amounts of personal care and pharmaceutical ingredients in the body are transferred to sewage treatment plants, streams, rivers, lakes and the ocean through wastewater, according to a recent study published in Environmental Toxicology and Chemistry.

Specifically, Rutgers scientists tested the bacteria in sludge from a sewage treatment plant for the ability to break down two personal care ingredients and two pharmaceutical products: oxybenzone; a sunscreen ingredient; methylparaben, a preservative; naproxen, an anti-inflammatory drug; and guaifenesin, an expectorant. Results showed that while the bacteria broke down methylparaben, oxybenzone and both pharmaceutical products were only partially broken-down. The resulting materials create new contaminants in waterways, according to the researchers.

"Our findings can help us assess other widely used pharmaceutical and personal care products with similar chemical structures. By predicting or assessing the chemicals that might form during the breakdown process, we can identify and quantify them in the environment," said Lily Young, co-author, distinguished professor in Rutger's Department of Environmental Sciences.

Contaminants such as those studied have been increasingly detected at low levels in surface water, and may have an impact on health, according to the U.S. Environmental Protection Agency. Future research on the topic will evaluate long-term persistence of the transformed chemicals from various environmental locations.

These findings of contaminants in waterways bring to mind research that has sparked debate and led two U.S. legislative bodies to ban the sunscreen ingredients oxybenzone and octinoxate from areas near coral reefs; in that context, the materials were said to enter and damage coral reef ecosystems after swimmers wore them in nearby water.

While the details vary in ingredients and products, the end result may be the same. Will the cosmetic industry see regulatory action in response to the claims that personal care ingredients may affect waterways? Follow Cosmetics & Toiletries as we watch for larger implications of these findings.

Read the study at www.news.rutgers.edu.