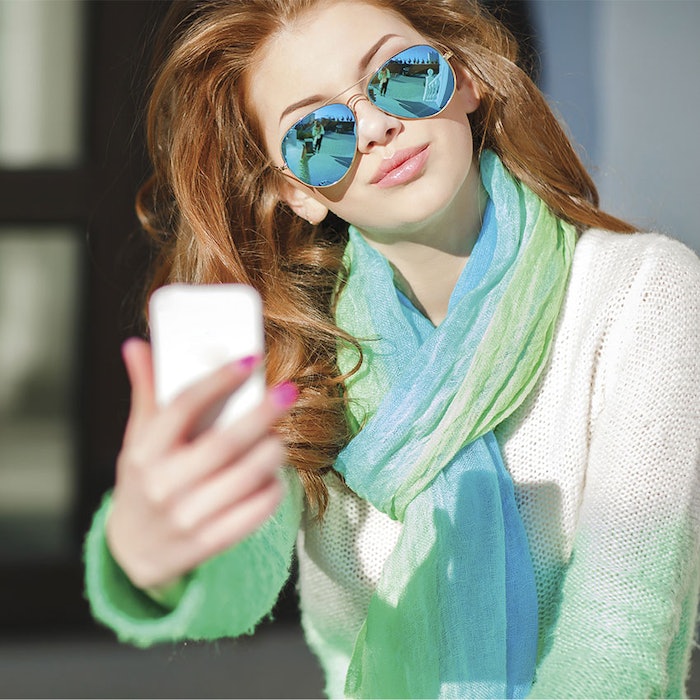 The selfie trend continues around the world and does not distinguish between sex, age or nationality. This phenomenon is demonstrated by the proliferation of smart phones with high-resolution cameras,1 selfie sticks and the flood of selfies appearing on social networks such as Facebook, Instagram, Twitter, Snapchat, LinkedIn, etc., where information is shared in real time. There are also apps available with software providing advanced facial recognition, editing and retouching capabilities.2 Unfortunately, there are even cases of extreme selfies, where people have died trying to take the best photo.3

The selfie culture is part of our daily lives; with friends and family, at work, at cosmetic science congresses and in other unusual places, where we try to look as good as possible before snapping a selfie. And it is precisely here when cosmetic formulators find themselves challenged to develop formulas with increasingly powerful, soft-focus properties. This article explores eye tracking as a means to test panelist reactions during product development, ultimately to improve soft-focus color formulas.

Eye tracking methodologies are widely used to evaluate advertising, but have great potential to reinforce the cosmetic design process. This trend is evident in the literature, where studies using this method in the performance evaluation of cosmetics were reported. Examples include shine perception in hair products;4 the characterization of facial features in skin care consumers5 and evaluations of fragrance.6

In addition, in late 2016, the first smart phone integrating eye-tracking capabilities was reported,8 which raises the stakes of the soft-focus formulation challenge; formulations providing immediate effects must be increasingly effective since technologies such as these will be used by consumers to evaluate and compare skin care and color cosmetics.

During the design stage, formulators have several soft-focus options exhibiting superior performance. This is where eye tracking can help them choose the most effective option. How?

Consider soft-focus effects referring to the ability of a material to minimize the visible appearance of wrinkles and imperfections on the skin. Cosmetic materials achieving this effect do so by light diffraction, as shown in Figure 1.9 By tracking the eye movements of panelists as they evaluate a product, the product developer can differentiate between two or more formulas exhibiting similar performance. This will be demonstrated in the next section. The eye-tracking technique can also complement traditional assessments made using bioengineering techniques and perception tests.

Eye-tracking capabilities on consumer devices raise the stakes of the soft-focus formulating challenge.

Test formulas: Three products including materials such as polymethylsilsesquioxane, silicone elastomer, polyethylene and polyurethane; a placebo; and a control were prepared (see Table 1). For eye tracking evaluations, the three materials presenting the best visual performance were chosen.

Panelists and gaze fixation identification: Fifteen anti-aging product formulators between the ages of 20 and 35 years served as the test panelists. High-resolution photos were taken before and after the subjects applied test products. These images were used to determine the behavior of each panelist’s gaze as they looked for the presence of wrinkles; Figure 2, Figure 3 and Figure 4 show some examples.

Black leather matrices: For negative controls, highly wrinkled, treated black leather was chosen as the emulsion application matrix since it provides good contrast for soft focus observations. Leather plaques, 10 cm x 7 cm, were prepared. In each case, 0.1 g of product was applied to only half of each plate, for comparison. Treated and untreated leather samples also were photographed and used to determine the behavior of each panelist’s gaze.

Eye tracking readings indicate to researchers which parts of an image receive more visual attention from evaluators, as well as the intensity of their attention. This is illustrated using heat maps. While observing images of the test subjects, as might be expected, evaluators tended to pay more attention to places where wrinkles were most visible—corresponding to the “before” images. Figures 6a-b show examples of the behavior of observation and Figures 7a-b show examples of heat maps for the same photographs; note the color red designates a greater degree of attention from the evaluators.

Figures 8a-b show example readings by panelists on the untreated negative controls. It is interesting to see the homogeneity of the point distribution representing their gaze on the photographs, since in this case, no product was applied.

In treated negative controls, as noted, formulations were spread on one side of the leather plaques, for comparison. On the left, no product was applied (control zone); on the right, the test formula was applied (see Figure 9). A different leather matrix was used for each product. Each panelist observed the photographs for 7 sec.

Figure 10, Figure 11 and Figure 12 show example readings obtained for the formulations tested. Here, a tendency for panelists to look more closely at areas with more wrinkles was also observed. Cases of better soft focus effects by products on the right side are thus represented as more visual attention to the left side, without product application.

Gaze fixations were analyzed to find the formulation with the best performance. Products 2 and 3 showed more visual attention on the left side than product 1 (p = 0.003) as shown in Figure 13. According to these results, formula 3 resulted in the greatest number of gaze fixations on the left side, and therefore exhibited the best potential for in vivo evaluations.

The application of eye tracking for soft focus evaluations during the design stage revealed the number of gaze fixations increased in areas where more wrinkles are present, which indicated the performance of different fillers. This methodology is therefore suggested for saving time and costs by quickly evaluating formulations using photographs before investing in in vivo testing.

Acknowledgements: The authors wish to thank Neurocorp for its help with the readings described.

Three products including materials such as polymethylsilsesquioxane, silicone elastomer, polyethylene and polyurethane; a placebo; and a control were prepared.