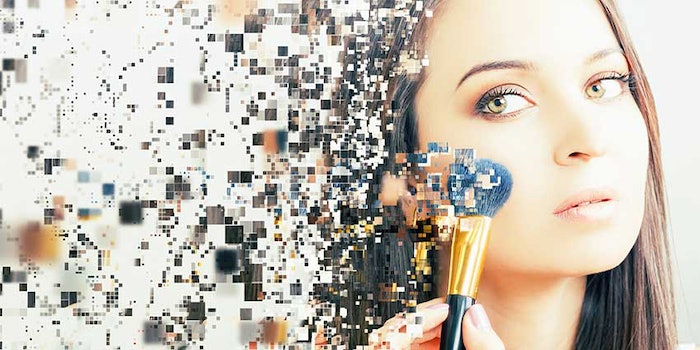 E-cosmetics including data analytics, immersive realities and smart phones for efficacy testing closed out the SCC Annual Meeting conference sessions. Together, they brought fundamental formulation techniques up to speed with modern consumer behavior and expectations.

Immersive experiences including virtual, augmented and mixed realities were explored by Daniel Japiassu, of YDreams Global. "It may not be clear how, but these technologies will eventually affect your business," he said.

Virtual reality: He gave examples from the consumer world. For example, virtual reality (VR) movie theaters, which create new narratives; in gaming systems; and in medicine, to "see" inside of patients and visualize surgical procedures from 3-D scans.

On a commercial level, he explained, "At the moment, 32% of consumers are aware and interested in VR, and the remaining 68% are either unaware or interested." However, he shared some historic trends for some of today's most well-accepted technologies—which trended similarly to VR. "VR Is about to make a jump," he projected.

He added that VR is a great way to engage millennials. For example, Facebook is developing a Vtime experience, whereby friends can plug into avatars viewed through a headset to connect with each other virtually but in the same social setting.

"Anything you're currently doing in 3-D should be moved to VR," he concluded.

Augmented reality: Japiassu next described augmented reality (AR), such as the Pokémon Go, game, whereby users experience real-world information through their phone camera or special headsets, enhanced with information that is not real. The key application for this technology is in e-commerce. He provided one example where a furniture store allows you to "place" virtual pieces in your home to see if you like them.

Again, he added, "I'm not sure how it could be useful to [the cosmetics industry], but it's [emerging]." He added it is already being used in apps to try on makeup, or in smart mirrors to advise on skin product choices.

Mixed reality: "Mixed Reality (MR) is a lot harder to explain," said Japiassu. "It's sort of like AR 2.0." He described it as layering technologies such as AR and VR with artificial intelligence, to create new realities from existing ones.

He provided a video to help visualize this idea, whereby a user might, wearing a headset, reach toward their desk and have their email, phone or other "office" icon options pop up digitally, with which they interact to place a call or check email. "This is mainly in conceptual stages at the moment," he said.

Finally, Michael Isnardi and David Berends, of SRI International, explained the standard features of most smart phones and their capabilities for efficacy testing. "The smart phone you hold in your hand has more computing power than all the technology combined to send a man to the moon," said Isnardi.

The duo went into the basic sensors in smart phones and their relevance for taking high-resolution images required for efficacy or other types of cosmetic testing; similar to devices including spectrophotometers and texture, mottling and gloss imaging. They also describe an app they developed to take rapid-fire images at a near-microscopic level.

"The new iPhone has the technology to take a 3-D scan of your face and use this facial recognition of you as a password," said Isnardi. "If you can model 3-D images of a face, you can imagine its uses for cosmetics."

Indeed, many marketers are.