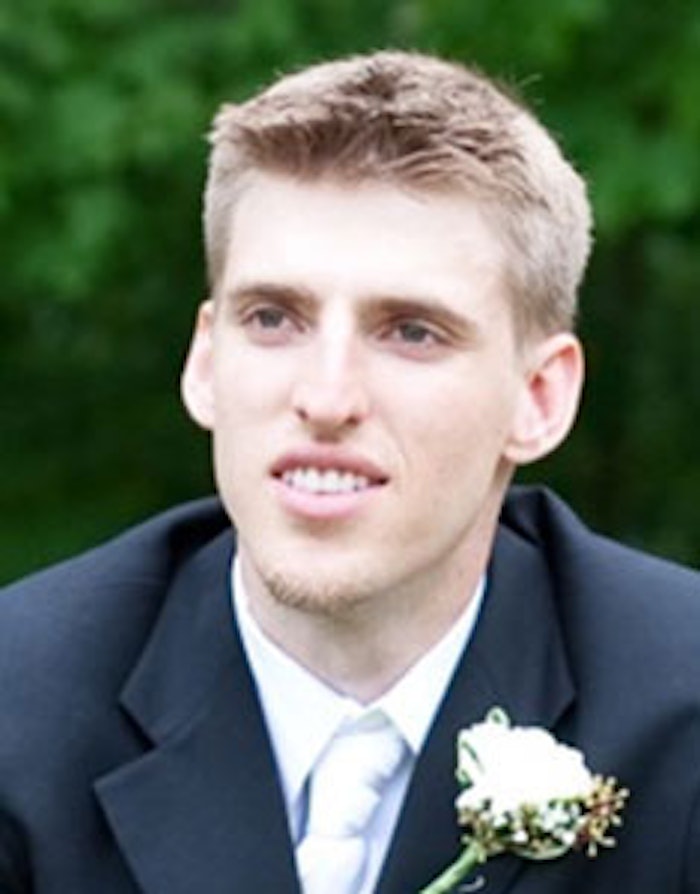 The device simply is comprised of the inverse opal; however, according to Burgess, the composition of the opal makes it truly unique. “[The inverse opal] is a slab of silica that has the refractive index of glass. It has an impeccably highly ordered array of air spherical pores. We were not the first group to make [a photonic crystal], but in comparison to other photonic crystals, this inverse opal is really highly ordered. It has a face-centered cubic (FCC) lattice and a single orientation in the growth direction. We grow it vertically by evaporation,” he says.

The team combines the mixture in a pot and heats it to let the water evaporate. “As the water evaporates, the colloidal crystal grows which will eventually become your air pores,” Burgess adds. The silica grows between the spheres; therefore, after the team burns off the spheres the silica inverse opal is left behind. Burgess explains, “If you take it up to 500°C in an oxygen atmosphere, you can burn off the polymer but the silica stays. Not only are the pores uniform size, but because they are so ordered in terms of their orientation, the little openings between two of these spheres are uniform in size as well.”

The team chemically patterns the surfaces of the inverse opal with repeated iterations of alkylchlorosilane functionalization and masked oxygen plasma exposure. “When liquid is forced through the bottleneck of these ordered pores, it produces an energy tradeoff replacing solid air with solid liquid, but also creating liquid air interfaces,” explains Burgess. “This threshold can be decreased to lower surface tension. The high symmetry of the structure allows these transitions of wetting to be really sharp. A technique to put different surface chemistries in different regions was created. The surface chemistry is moving the location of the threshold in terms of surface tension or wettability, relative to another surface chemistry somewhere else. The more of these thresholds that were added, the more distinct patterns are seen, but because the structure is so highly regular, if I can pick surface chemistries really close to each other, then two really similar liquids can be made to produce different patterns,” he says.

The structure identifies different liquids with a color change, whichis produced as a result of the refractive index changes resulting from wetting, and a pattern is seen by comparing the refractive index-contrast between the wetted and non-wetted areas. “A green color or red color results depending on what angle you look at it from coherent scattering off of these air/glass interfaces that are regularly spaced on a nano scale,” Burgess explains. “However, when a liquid that has a higher refractive index than air and closer to that of glass fills the pores, the scattering becomes much weaker and the film appears transparent. The apparent color resembles that of the underlying substrate.”

According to Burgess, W-Ink falls into three catergories of applications: encryption, liquid authentication and liquid identification. He also notes that this order corresponds to their ease of success, with encryption being the easiest.

The encryption aspect of the device relates to packaging. “This film can be grown on a sticker or package, and with application of secret liquids such as alcohol, an individual can validate the package,” notes Burgess. For example, this can be used to validate cosmetic, pharmaceuticals, fragrances and money packages. “Hitting the quality control and standards testing early with commercializing the device in this category is easy because we control the liquids,” adds Burgess.

The second category involves authenticating the liquid itself. This category is a quality control test for a specific liquid formulation, for example, determining gas grade, liquid pharmaceutical or liquid cosmetic forgeries. “For this category, we would design a strip or film using the opal that upon being swabbed with the liquid, will produce two stripes in the correct surface tension, three stripes in a higher surface tension and one stripe in a lower surface tension,” notes Burgess. “We can tailor the chemistries to the particular liquid needs to be authenticated.” This application could possibly be used for quality control in scale-up to identify variations of a formulation before disposing a batch or sending it off for testing.

Interference plays a part in the third category. The device can be used to identify liquids such as those in oil tanker spills, lab spills or any kind of unknown liquid. Burgess has had requests for this application from the auto industry to identify hazardous liquids quickly; however, it is easier to identify the liquid when the opal is coded for a finite number of liquids. Without knowing the specific liquids sought, interference would become an issue. Currently, Burgess is working to test liquors for methanol, which has a different surface tension than ethanol. His team is also working on exploiting the wettability to surface tension to get around the interference.

Although the opal can be customized for a finite number of liquids, if given an infinite array of possible materials, Burgess can get a rough idea of those materials based on their surface tension. This could help those in an R&D lab identify liquid materials or potentially identify the liquid materials in a benchmark product. Burgess notes, however, that the inverse opal would not separate miscible liquids.

Burgess currently is working to differentiate chemical sensing from surface tension sensing, which he notes can be done because it is a wettability threshold and not a surface tension threshold.

Ian B. Burgess is a doctoral candidate in applied physics at Harvard University. His research focuses on the development of colorimetric sensors based on structural color. He received his Bachelor of Science degree with honors in mathematical physics and a minor in chemistry from the University of Waterloo in Ontario, Canada. Before coming to Harvard, he held research internships at l’Institut National de la Recherche Scientifique, McMaster University and the Royal Military College of Canada.