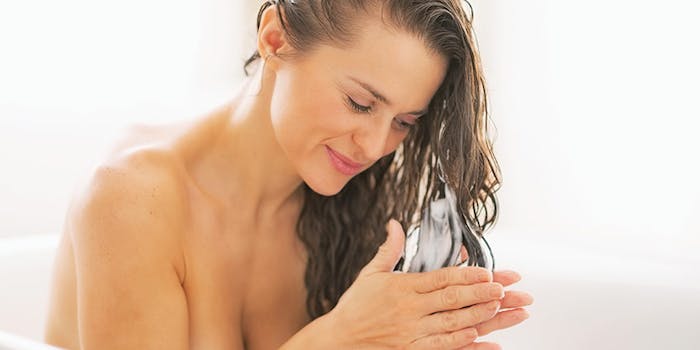 *This paper was first presented as a poster during the 2018 IFSCC Congress in Munich.

Cross-modal associations of olfactory and visual, and olfactory and tactile information processing are of high significance for cosmetic products. Such associations have been demonstrated experimentally and form the foundations of the growing field of sensory science. Olfaction and visual association have been studied from several different angles—direct color/odor associations, i.e., cucumber, spearmint and lemon, have been associated with green, turquoise and yellow/orange colors, respectively;1 and higher odor intensity has been associated with darker colors.2-3 In another study, the presentation of congruent pairs of visual/odor items was proven to facilitate odor detection.4

The cross-modal association of odor and touch were first examined in the context of the tactile experience of fabrics. Laird5 demonstrated that silk stockings were judged superior when impregnated with a floral scent over those with natural scent, while Demattè et al6 showed that fabric odorized with lavender odor was perceived as softer than an equivalent odorized with an animal smell. These studies suggest that formulations alone may not give rise to positive tactile perceptions by the consumer. The impact of olfactory context (pleasant/unpleasant) on the perceived pleasantness of touch was studied by Croy et al7 via functional Magnetic Resonance Imaging and perception ratings, demonstrating that unfavorable olfactory experience modulates the behavioral and neural response to affective touch. Stevenson et al.8 explored the cross-modal associations of odor with texture, color and other attributes semantically and concluded that smooth texture was associated with almond, aftershave and caramel odors, while odors judged intense and unpleasant raised the perceptions of roughness. These cross-modal associations are highly relevant not only to the immediate consumer experience of cosmetic products during their application, but are likely to influence their perceived efficacy for modifying the tactile properties of the hair or skin, too.

As hair grooming involves a range of tactile experiences—including rubbing, holding and stroking the hair—the consumer’s tactile perceptions of their own hair while using a fragranced hair care product are important. Correlating instrumental measurements and panel data9 demonstrated that hair fiber diameter and bending stiffness were key to the overall “handling” quality of medium and coarse dry hair, but for finer hair, surface friction was a determiner for perceived softness. The value of this study is that it identifies the desirable single hair fiber properties, thus informing the technical choice of cosmetic ingredients that can deliver them. Furthermore, a strong halo effect of different fragrance families used in shampoos was identified by Chrichill et al.,10 who studied the sensory perceptions of foamed and dry hair. The researchers demonstrated that the perceived texture characteristics of hair were affected by the different odors; for example, fruity and floral odors were related to positive attributes such as silky, smooth, sleek and creamy, while the herbal scent was related to negative attributes such as sticky, slimy and tangled.

More recently, a novel device generating hair friction data from the direct contact with hair and converting it to sound, and consequently to music, has been presented.11 Although the tactile and auditory stimuli in this project are connected by an algorithm, the experience is one of cross-modal association.

This aim of the present study was to compare the impact of two fragrance types on the tactile perceptions of dry, bleached hair treated with a leave-on conditioner. This vehicle was selected as the most suitable for imparting lasting odorizing on the hair, as well as tactile benefits such as smoothness and softness. In technical terms, the deposition of conditioning agents lubricates the hair fiber and diminishes the surface friction and combing forces.12 However, further enhancement of this effect was achieved via the addition of a specialty polymer, in accordance with the supplier’s literature.13 A range of sensory panel tests was used to evaluate the tactile properties of hair after the application of a control conditioning base and the enhanced conditioner in both its fragranced and nonfragranced variations. In addition, the ease of combing of hair odorized via the leave-on conditioner and with alcoholic spray of the tested fragrances was tested instrumentally.

Fragrances: Two fragrances were developed, fruity and green, based on the fragrance family descriptors given by Chrichill et al.10

Treatments: A leave-in conditioner base (CB) was formulated, to which bis-diisopropanolamino-PG-propyl dimethicone/bis-isobutyl PEG-14 copolymer (amino-glycol-silicone block copolymer, or AGSP) was added for enhanced slipperiness, smoothness and fragrance release. Alcoholic solutions of the fragrances were prepared containing 15% w/w fragrance and 85% w/w denatured alcohol. The conditioning formulations and all treatment variables are listed in Table 1 and Table 2.

Test substrate: Caucasian hair tresses with a length of 30 cm and weight of 3.5 g were used in all tests. To amplify the effect of the leave-in conditioner, all tresses were prebleached using a commercial powder bleach and developer containing H2O2, 30 vol.

Treatment application (leave-in conditioners): Each dry hair tress was placed on aluminium foil. For every 5 g of hair, 1 g of conditioning treatment was used. The products were dosed using hypodermic sterile syringes and applied evenly along the length of a tress. The tress was then combed 5× using a wide-tooth comb and massaged through both sides for 30 sec manually using gloved fingers. The tress rested on the foil for 3 min and was then gently blown dry for 3 min, using the cold-air setting, in order to acquire an assembly reflecting that of a moving head of hair.

Discrimination test: The discrimination test was deemed most appropriate as a start, since it is simple and minimizes sensory fatigue and carry-over effect throughout the sensory evaluation process. The aim was to assess the cross-modal association between odor and what was technically an identical tactile conditioning effect delivered by the selected active copolymer.

A leave-in conditioner base (CB) was formulated, to which bis-diisopropanolamino-PG-propyl dimethicone/bis-isobutyl PEG-14 copolymer (amino-glycol-silicone block copolymer, or AGSP) was added for enhanced slipperiness, smoothness and fragrance release. Alcoholic solutions of the fragrances were prepared containing 15% w/w fragrance and 85% w/w denatured alcohol. 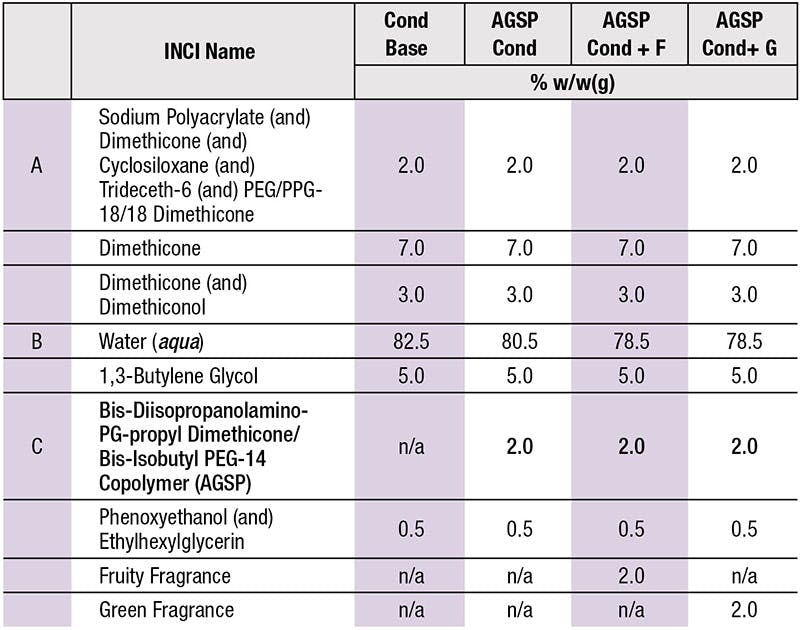 This aim of the study was to compare the impact of two fragrance types on the tactile perceptions of dry, bleached hair treated with a leave-on conditioner. 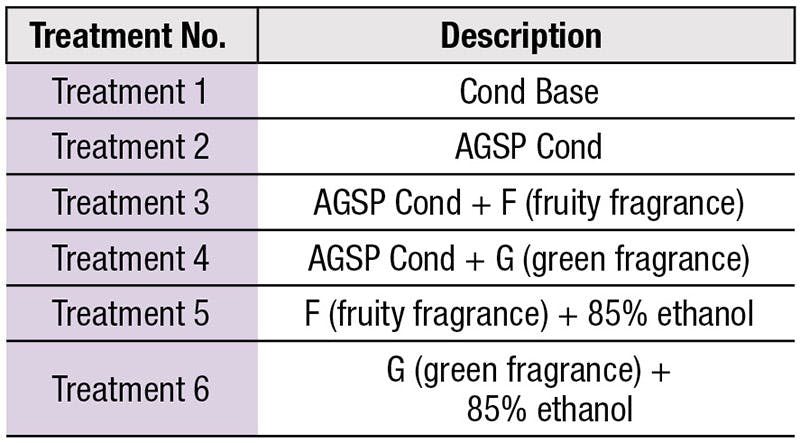