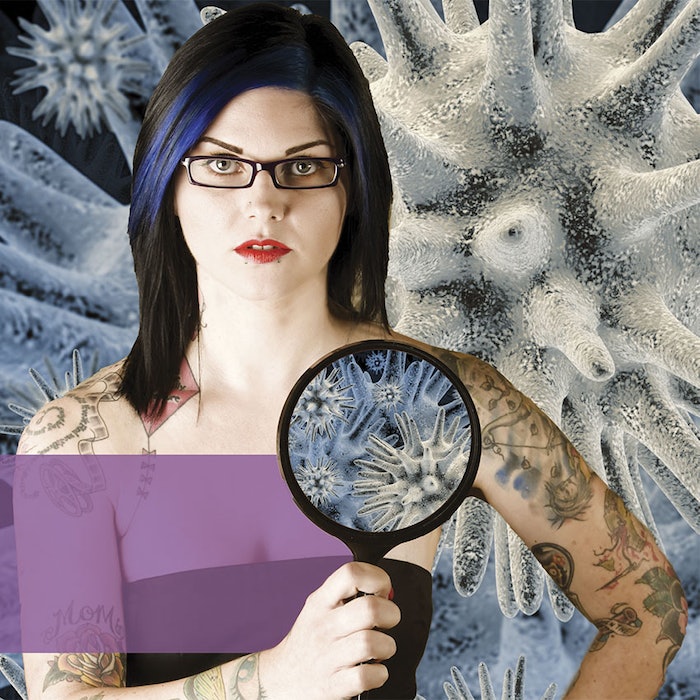 Just as every individual has a distinct fingerprint, they also have their own unique microbiome that is an accumulation of microbial community inhabitants. This serves in host defense. Commensal microflora on the skin, for example, are responsible for maintaining skin health by restoring immunity and communication with the lymphatic system.1

However, in personal care, indiscriminate microbial destruction, as traditional preservatives often employ, can unintentionally alter the thriving ecosystem that is the skin's microbiome. Here, as an alternative, antimicrobial peptides were explored for effects on the skin's microbial species.

In relation, novel research analyzing activity of the histone deacetylase (HDAC) enzyme has concluded some naturally derived antimicrobials are capable of destroying pathogenic bacteria while maintaining commensal microflora on the skin—supporting the balance of the microbiome and promoting overall skin health. HDAC expression was therefore used as an indicator to compare effects on the skin’s microbiome of traditional biocides vs. natural antimicrobials.

Indeed, the application of topical antimicrobials altered levels of HDAC expression and decreased the population of the microbiome. While this research suggested HDAC is a channel of communication between microflora and the skin, the messenger of the microbial cross-talk has yet to be determined.

As will be shown, a conventional approach was taken to analyze effects in species of the skin’s microbiome. Specifically, effects were assessed with the application of three antimicrobial peptides: Leuconostoc radish root ferment filtrate, Lactobacillus ferment, and Lactobacillus (and) Cocos nucifera (coconut) fruit extract. These were compared with a negative control (water) and a positive control (triclosan). The microbiome population was determined by DNA extraction, 16S ribosomal RNA (rRNA) polymerase chain reaction (PCR) amplification and sequencing.

A less conventional approach was taken regarding the panel size and evaluation during this study. While large subject panels allow for trend recognition between subjects, with the individuality of each person’s microbiome in mind, it would be difficult to establish trends within a group of subjects. Examining the nasolabial folds of each subject can isolate the geographic location of the microbiome, although the person-to-person variation of microflora is still uncontrollable. Thus, patterns in microbial change on each test subject were evaluated individually.

To understand the significance of the present study, it is first crucial to recognize some of the common microorganisms located on the skin as well as the method of bacterial identification employed here.

The species of microorganisms investigated were: Staphylococcus sp., Corynebacterium sp., Propionibacterium sp., Streptococcus sp. and Aerobacillus sp. S. epidermidis is one of the most common and abundant microbes on the skin, and may have a similar mutual relationship with skin as most flora function in the gut.2 C. jeikeium offers epidermal protection via a mutualistic relationship with the host and is thought to be more beneficial than harmful to skin.2 P. acnes is often associated with detrimental effects such as acne but it is well-established that both healthy and acne-prone patients are colonized with the bacterium. S. pyrogenes has been found in vitro to serve the host in a protective role by secreting pore-forming toxins to promote wound healing.2 Finally, Aerobacillus sp. has the ability to grow and produce polysaccharides.3

The beneficial role of microbes on the skin surface, unlike digestive probiotics, remains relatively untapped aside from the known roles of these species in protection against other pathogenic and opportunistic invaders.

The method of bacterial identification for this study was16S rRNA sequencing, an overview of which is given in Figure 1. This is a common amplicon sequencing method used to identify and compare bacteria present within complex microbiomes and environments. As the name suggests, the technique focuses on the analysis of ribosomal RNA.

Ribosomes are complex structures found in the cells of all living organisms that play a role in protein synthesis. Prokaryotic ribosomes consist of two subunits, a large and a small subunit, the latter of which 16S rRNA is a part. The 16S rRNA gene contains hyper variable regions that provide a species-specific signature, which is useful for the bacterial identification process.4

Ribosomal RNA is conserved in cells, and distantly related organisms have remarkably similar portions of 16S rRNA sequences. 16S rRNA gene sequencing is commonly used to identify diversities in bacterial microorganisms and study phylogenetic relationships between them.4 There are several advantages to using ribosomal RNA in molecular techniques such as gene sequencing. These include the presence of ribosomes and ribosomal RNA in all cells, and the 16S rRNA gene being highly conserved in nature and large enough to use for informatics purposes.4

The amplified rRNA genes are then cloned and sequenced. Comparison of the sequenced rRNA with those in the genetic sequence database allows for the identification of phylogenetic groups.5 The 16S rRNA-based taxonomic characterization can provide information on the microbial population present in a given environment, and how its relative distribution may differentially evolve under an applied treatment over time (see Figure 1).

The individuality of each person's microbiome makes it difficult to establish trends within a group of subjects.

Application to the lateral nasal folds was performed by rubbing a pre-moistened swab back and forth across the treatment area for a total of 60 sec. Consistent pressure was applied to the treatment area to ensure substantial recovery of the microbial population. Untreated skin swab samples were taken prior to product application to serve as a reference for the normal microbial presence on each participant’s skin. Each untreated skin swab sample was taken using a sterile swab pre-moistened with sterile saline solution.

As noted, treatments were then applied twice daily for a period of two weeks and new samples were taken from each participant to analyze population differences after product application. One week after the conclusion of product treatments, the last round of samples was taken from each participant to analyze the populations present after treatment ceased. In total, 45 samples were stored in 15-mL conical tubes and frozen at -20°C immediately after sampling. These samples were submitteda for DNA extraction, 16S rRNA PCR amplification and sequencing analysis.

The amplicons obtained from PCR amplification from each sample were collected in equimolar proportions into a single pool for sequencing. After sequencing, the samples underwent taxonomic clustering and analysis. The resultant usable reads were clustered into Organizational Taxonomic Units (OTUs)b. OTUs classify closely distinct microbial organisms from sequences via DNA homology, although in some cases, they may only read genus or a higher levels of taxonomy. It is important to note that OTUs do not always provide specific species for each sequence but these units still serve as effective indicators of the bacterial diversity on skin.

Taxonomic clustering and analysis was performed after sequencing the samples to allow for the generation of a phylogenetic tree. Quality assurance analysis was performeda for base calling quality and in-depth analysis was performed to analyze the size and nature of 16S rRNA. The data obtained from the readings met the quality assurance specifications to create scoring reads for alignment and database searching. The usable reads were blasted against the OTU reference databaseb to generate OTU abundance results, creating phylogenetic trees and multiple alignments. These results were used to calculate diversity estimates based on the abundance of microorganism genus in each sample. Overall, the analysisa showed a diverse population with an abundant presence of Propionobacterium sp., Staphylococcus sp., Aeribacillus sp., Streptococcus sp. and Corynebacterium sp.

As stated, this study determined the microbial population present on skin and any changes to this population after two weeks of varying product treatments. The microbiome population was determined after sampling the skin area treated with sterile swabs pre-moistened with sterile sodium chloride solution followed by DNA extraction, 16S rRNA PCR amplification and sequencing. During the treatment, one of the participants showed high sensitivity to the positive control, triclosan, and for this reason discontinued further treatment.

The DNA extracted from the samples taken before treatment application began and after the bioinformatic analysisa showed a diverse population, previously mentioned, as well as different populations known as transient and/or opportunistic invaders, such us Escherichia sp, Pseudomonas sp., Vibrio sp., Clostridium sp., Neisseria sp., etc. Examples of a phylogenetic tree and a phylogenetic tree taxonomy obtained during this study are shown in Figure 2 and Figure 3.

The beneficial bacteria Staphylococcus sp., and Corynebacterium sp. continued increasing after completion of the treatments. Examples of changes in microbiome population observed during this study are shown in Figure 4, Figure 5, Figure 6, Figure 7 and Figure 8. Patterns in microbial change on each test subject were evaluated individually, as noted, since the microbiome of each participant is unique.

Taxonomic units do not always provide specific species but they serve as effective indicators for bacterial diversity.

Under the conditions of this in vivo human skin microbiome assay, two of the antimicrobial peptides increased the beneficial bacteria in participants while decreasing the presence of Propionibacterium sp. Lactobacillus ferment decreased all bacteria genera found in participants, compared with triclosan as positive control and water as negative control. After the conclusion of the topical treatments, Propinobacterium sp. reappeared in the skin of the participants treated with antimicrobial peptides.

The beneficial bacteria Staphylococcus sp. and Corynebacterium sp. continued increasing after completion of the treatment. By increasing the populations of beneficial bacteria and decreasing the population of Propionibacterium sp., i.e, the commensal bacteria associated with the development of acne, this study demonstrates the potential of natural antimicrobials to promote a balanced skin microbiome.

The complexity of the skin microbiome is a relatively new area of research in the cosmetic industry. Since the discovery of microbes on the human body, information on the microbial population has been reported; however, the role of microbial population in skin health is yet to be fully elucidated. This study adds to the understanding of several dominant microorganisms such as Propionibacterium and Staphylococcus spp., which are common components of the skin microbiome. It also provides insight on the effect of topical application of antimicrobial peptides on the microflora of skin.