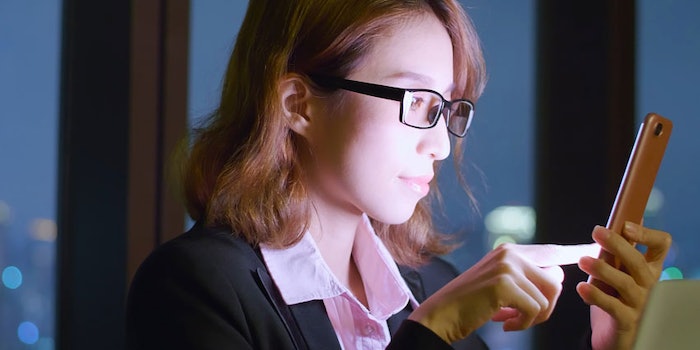 In a company press announcement, Kolbe stated that such public discourse is characterized by a lack of scientific knowledge and studies. Beiersdorf studied this misconception and reported these findings in a poster presented at the 27th EADV Congress in Paris. Results showed that the amount of blue light emitted during conventional use of devices is, as Kolbe put it, "nowhere near enough to trigger harmful skin effects."

See related: The Dark Side of Visible Light; Oxidative Damage, Aging and More; A Discussion

He explained that one week, uninterrupted, sitting just 30 cm in front of a monitor is equal to one minute outside on a sunny summer day in Hamburg; and that natural blue light is the actual danger. “The much-feared negative impact of increased screen use due to the coronavirus—for example, as a result of more online meetings or increased use of smartphones—is therefore scientifically untenable. The effect on the skin is negligible, which means concerns about negative impacts on the skin are unfounded,” explained Kolbe.

Discussions surrounding artificial blue light should not distract from the actual danger of natural blue light.

The company underlined, however, that discussions surrounding artificial blue light should not distract from the actual danger of natural blue light, which has sufficiently been proven by years of research at Beiersdorf. "Visible light accounts for about 50% of solar radiation, one-third of which is natural blue light. It penetrates much deeper into the skin than UVA rays, which make up just 5% of sunlight. As a result, scientists have long labelled this light as 'potentially dangerous,'" the company wrote.

A separate Beiersdorf study, published in Photodermatology Photoimmunol Photomed, showed that high energy visible (HEV) light generates oxidative stress, thus accelerating skin aging and increasing hyperpigmentation. The same study also verified the protective effect of antioxidant ingredients such as licochalcone A, which the company notes is used in most of the its Eucerin brand sunscreens, as well as the Sensitive-Allergy and UV Face range of Nivea Sun products.