Firing Up the Cannabinoid Cosmetics Debate at SCC Annual 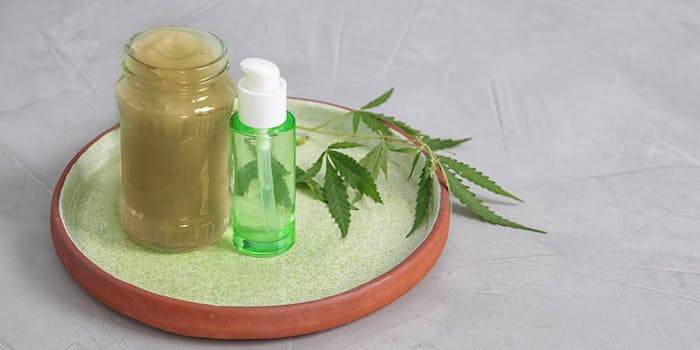 Clearing up the haze around cannabinoids of interest to personal care, Jeremy Riggle, Ph.D., of Mary's Medicinals, presented the basic chemical constituents in cannabis during the SCC Annual Meeting. He then explained that the body has an endogenous cannabinoid receptor system, and entities derived from cannabis—e.g., cannabinoids—can act on this system to positively affect skin conditions such as psoriasis.

"Cannabis contains 100+ cannabinoids, of which two main ones are known: [tetrahydrocannabinol] (THC) and [cannabidiol] (CBD)," explained Riggle. "In addition, there are some 400+ non-cannabinoid constituents including terpenes, flavonoids (anthocyanins), steroids ..." These plant-sourced cannabinoids are referred to as phytocannabinoids.

Cannabinoids also occur in the human body for which receptors naturally exist; such as in the central nervous system (cannabinoid receptor subtype 1 or CB1); lymphatic system (cannabinoid receptor subtype 2 or CB2); or G-protein coupled receptors (GPCRs) found broadly in cell membranes. The role of these cannabinoids is to trigger various physiological actions. These innate cannabinoids are referred to as endocannabinoids; examples include N-arachidonoylethanolamine (also known as anandamide or AEA) and 2-arachidonoylglycerol (2-AG).

Additional types of cannabinoids are those which are synthesized; such as nabilone and rimonabant. Furthermore, biosynthesis and enzymatic pathways that produce endocannabinoids have been identified within the body and serve as potential targets; although according to Riggle, GPCRs are favored and targeted by 1/3 to 1/2 of all drugs.

For example, those that engage the CB1 receptor could initiate activities relevant to:

Those that activate the CB2 receptor signal:

As noted, GPCR receptors are broadly varied. Potential targets, according to Riggle, include:

Clearly, many of these mechanisms have roles in the regulation or dysregulation of skin pathophysiology.

"The role of the ECS in skin pathophysiology ranges from epidermal cellular differentiation, psoriasis, skin tumors, acne and seborrhea, and dry skin/related conditions, to dermatitis, systemic sclerosis and pain and itch," said Riggle.

"All of these conditions are essentially the result of disruptions in homeostasis or equilibrium in skin cells." However, Riggle noted, "We don't know yet which CBD can treat specific skin conditions."

Furthermore, cannabinoids have been identified that demonstrate possible benefits for applications including hair growth, sun protection and wound care.

"The ECS plays a significant role in regulating hair growth," said Riggle. "This could be used to target hair growth disorders."

In addition, according to Riggle, some phytocannabinoids demonstrate broad absorption in the UV range. Lastly, Riggle added, "Cannabinoids have antimicrobial and antifungal benefits," added Riggle. "These could benefit soap and deodorant applications, or treat open wounds as they heal."

Of course, especially considering the current regulatory landscape, it's not as simple as just adding cannabinoids in skin care products. "More research is needed," Riggle concluded.

In relation, Bridget Early, of Genemarkers, shared a poster elucidating cannabidiol's (CBD's) mechanism of action and its potential for skin care applications. The study was presented at the same meeting, this time in the Technology Showcase.

"CBD is a non-psychoactive cannabinoid extracted from the hemp plant," she prefaced. Its effects are mediated through the CB1 and CB2 receptors in the skin, whose expression initiates signaling cascades relevant to pain and inflammation. "Recent research suggests that CBD can also influence the epidermal skin barrier, hydration and wound healing," Early added.

At the core of the study was her company's newly developed gene expression panel to test the biological efficacy of CBD extracts and cosmetic formulas containing them.

"Our data demonstrates that the topical application of CBD regulates over 150 genes in the skin," said Early. Of those, the company identified:

While these results are noteworthy, according to Early, it is important to note, "Patterns of gene expression differed based on vehicle, extract purity and concentration."

Where might these findings take the cosmetics industry? All signs point to: Higher.

According to a Financialbuzz.com news commentary, the hemp industry grew by 16% in 2017, primarily driven by sales in the hemp-derived products and personal care segments. In addition, per a report by the Hemp Business Journal, the hemp industry was valued at $820 million in 2017 but is projected to reach $1.9 billion by 2022; a CAGR of 14.4%.

The key seems to be convincing regulators that the resulting yield will be worth their efforts; and so far, things are looking up.