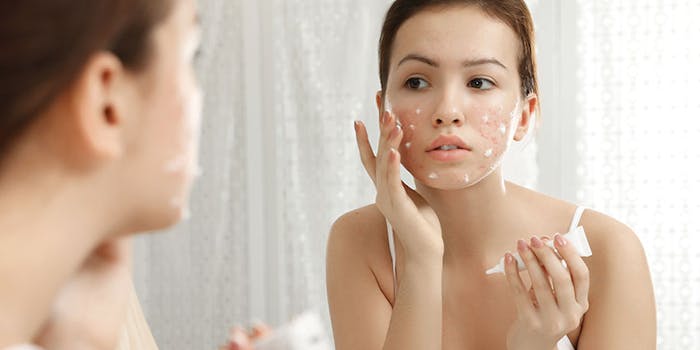 Benzoyl peroxide (BPO) is one of the most commonly used and highly effective topical treatments for acne.1-3 It is implemented as a monotherapy as well as in combination therapy with antibiotics and retinoids due to its antibacterial properties; specifically, BPO reduces the population of Cutibacterium acnes (C. acnes, formerly Propionibacterium acnes) on the skin. It also increases the rate of removal of excess dead skin cells that may block pores or comedones, therefore preventing breakouts before they start.2-5 Furthermore, BPO has been shown effective for both inflammatory and noninflammatory acne lesions.4

Chemical Properties and Mechanisms of Action

BPO or (C6H5CO)2O2 [CAS Number 94-36-0] is a non-toxic, colorless and odorless crystalline solid. It consists of two benzoyl groups bridged by a peroxide link (see Figure 1). BPO is prepared by treating hydrogen peroxide with benzoyl chloride (see Equation 1).6 When the oxygen–oxygen bond in peroxide is weak, it forms free radicals due to fission (see Equation 2). As this reaction indicates, the products are highly reactive radicals containing one unpaired electron.

BPO breaks down upon contact with the skin, producing benzoic acid and oxygen, neither of which is highly toxic to the skin. C. acnes, however, does not thrive in an oxygen-rich aerobic environment, and after penetrating the stratum corneum, BPO rapidly generates free radicals,1-5 which oxidizes the protein in C. acnes bacterial cell membranes. This, in turn, kills the bacteria and thereby provides anti-acne efficacy. In addition, since BPO acts as a toxin against C. acnes rather than an antibiotic, resistance to BPO does not occur.

BPO is almost insoluble in water but dissolves easily in chloroform, ether and other organic solvents. Crystalline BPO powder is perceived as being gritty, extremely hard and requires several hours of milling in water to prepare an aqueous paste (> 25% water) before it can be used in topical products. The milling process must be carried out at a low temperature to maintain the stability of the BPO, which starts decomposing at temperatures higher than 40°C.7

The degradation of BPO in solution is represented by the free radical mechanism. In the initiation step, BPO thermally degrades to form benzoate-derived radicals. These radicals then propagate the reaction by reacting with BPO or a solvent to form other benzoate or solvent radicals. The reaction terminates when two radicals are coupled together.

BPO is found to be more chemically stable in aromatic solvents such as ethyl benzoate and C12–15 alkyl benzoate than in nonaromatic ones; i.e., alcohol USP, cyclohexane, acetic acid, ethyl acetate, dimethyl isosorbide and isopropanol. It also can be solubilized in benzoic acid esters to provide a composition suitable for preparing topical products. C12-C15 alkyl benzoate is the most commonly used non-irritating, non-sensitizing and non-comedogenic water insoluble ester. Crystalline BPO is transformed into a soft, amorphous BPO by simple mixing with benzoic acid ester at room temperature. Extensive mixing or heat is not required. Also, due to the improved stability and non-irritating nature of the ester, this combination acts as a suitable vehicle for use in cosmetic lotions, gels and creams, and drug preparations. Notably, however, studies have shown that ethyl benzoate can be a better stabilizer of BPO as a solution in alcohol USP than C12–15 alkyl benzoate.9

BPO is formulated in an array of anti-acne products such as creams, lotions, face washes, body washes and high-concentration spot treatment gels. The concentration of BPO in these products ranges from 2.5% to 10%. The U.S. Food and Drug Administration (FDA) has established a monograph for lotions and gels with BPO due to the inherent instability of BPO in product form; the monograph provides for marketed product concentrations ranging from 90% to 125% for gel product forms, and 90% to 110% for lotion product forms.10