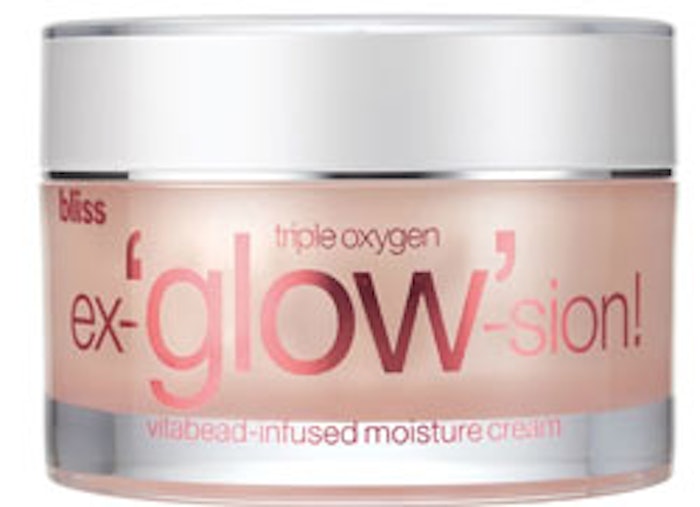 One of the things that a consumer and their skin can not live without is oxygen, according to Bliss. The Triple Oxygen Ex-‘glow”-sion! Vitabead-Infused Moisture Cream contains oxygen and microalgae for an instant burst of youthful radiance. Its formula provides an explosion of antioxidant vitamin E on contact, as vitamin C and three forms of oxygen help deliver beautiful, younger-looking skin. This column will review the ingredient listing for functionality and claims substantiation.

The “bio-active” or cosmeceutical ingredients are tetrahexyldecyl ascorbate, a stabilized ester of vitamin C; Prunus persica (peach) leaf extract, hydrolyzed soy protein, Vitis vinifera (grape) seed extract, tocopheryl acetate (vitamin E) and retinyl palmitate (vitamin A). Maltooligosyl glucoside/ hydrogenated starch hydrolysate is a carbohydrate syrup derived from starch that significantly reduces irritancy. Perfluorohexane, perfluoroperhydrophenanthrene and perfluorodecalin are the “three forms of oxygen” as saturated oxygen gas can be released to the skin and support natural cell respiration and collagen synthesis. I did not see any ingredient that corresponds to “micro-algae” in this deck.