When Acne Attacks, Hexylresorcinol and Ethyl Linoleate Fight Back (part I) 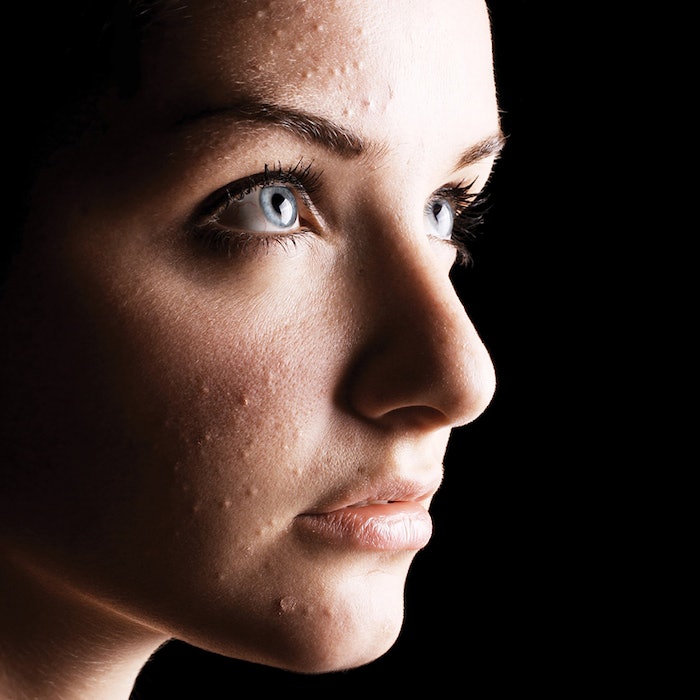 Editor's note: Part I or this article provides background and research information about acne. Part II delves into the experiment and results portion.

Acne affects about 80% of teenagers and young adults ages 12 to 24 years, although it can occur at all ages. It typically appears in the oil-producing areas of the body; namely the face, chest and back. Although acne lacks the urgency of a life-threatening condition, it produces long-term ramifications that can be significant, including cutaneous and emotional scars that can last a lifetime. It hampers an individual’s confidence, reducing self-esteem and causing deep emotional distress that can even lead to perceived disfigurement and Body Dysmorphic Disorder (BDD).1

Propionibacterium acnes (P. acnes) is a Gram-positive, normal commensal bacterium present in all individuals. While other bacteria, e.g. Staphylococcus and Corynebacterium, may reside in follicles and on skin, studies have specifically associated P. acnes with acne. This connection has been well-established, although the exact mechanisms leading to the development of microcomedones and transforming into inflamed lesions is unclear. The effectiveness of antibiotics to treat acne further supports a microbial connection to the disease’s pathogenesis.

P. acnes has been shown to induce the expression of pro-inflammatory cytokines in cells involved in cutaneous innate immunity.2, 3 Clinically relevant inflammation in acne may be initiated by a disruption of the follicular epithelium followed by the spreading of bacteria, including P. acnes, to the dermis.4 This can lead to the development of papules, pustules and nodulocystic lesions.5

The inflammatory acne linked to P. acnes is characterized by massive neutrophilic infiltration, and IL-8 plays an important role in the pathophysiology of P. acnes. One recent study confirmed that NF-κB activation is involved in the IL-8 production of monocytic cells stimulated by P. acnes.6 Kang et al. reported transcription factors NF-κB and activator protein-1 are activated in acne lesions with consequent elevated expression of their target gene products, inflammatory cytokines and matrix-degrading metalloproteinases, respectively.7 These elevated gene products are molecular mediators of inflammation and collagen degradation in acne lesions in vivo.7

This knowledge enables a rational strategy for the development of agents that can target inflammation and matrix remodeling that occurs in severe acne. Interestingly, Johnson & Johnson scientists have shown that inhibition of NF-κB activity triggers the synthesis of collagen and elastin, two key anti-aging biomarkers.8

So, although P. acnes is a commensal bacterium of normal skin, together with the sebaceous gland, it clearly is implicated in acne development.

In skin of color, perhaps the most disturbing feature of acne is not the active lesion itself but the resulting post-inflammatory hyperpigmentation (PIH).9 PIH manifests as hyperpigmented macules. Evidence suggests that higher skin phototypes experience more intense pigmentation, although this observation has not been confirmed.

The exact mechanism of PIH is unknown but the rise in melanocyte activity has been shown to be stimulated by inflammatory mediators as well as reactive oxygen species released during the inflammatory process.10 PIH within the dermis results from inflammation-induced damage to basal keratinocytes, which releases large amounts of melanin. The free pigment is then phagocytosed by melanophages in the upper dermis, which produces a blue-gray appearance to the skin at the site of injury.10

PIH can persist for months to years after the initial lesion has cleared.12 Therefore, designing an acne treatment regimen for skin of color should also focus on PIH; however, a delicate balance exists, as cutaneous irritation from the treatment itself can cause or exacerbate PIH in these patients.12 Dual-acting depigmenting and anti-acne agents are desired to treat PIH as is photoprotection, for the prevention of PIH.

Furthermore, it is a well-established clinical fact that inadequate control of acne inflammation can later lead to scarring. Scars are the most unfortunate and undesirable sequela of acne because once they form, they are not amenable to topical treatment and require invasive procedures such as chemical peels, dermabrasion or laser resurfacing to improve their appearance.13 These procedures are not only costly, but they themselves are associated with further risks of scarring and pigmentary abnormalities. Thus, the current recommendation is for acne treatments to target as many pathogenic factors as possible.

The role of dermocosmetics in dermatology, and particularly in acne, is also becoming more important as research elucidates the mechanisms of products in the pathogenesis of acne.14 Dermocosmetics have the potential to be used as monotherapy or in combination with medical treatments. It therefore has become important for dermatologists to understand these products, to effectively and appropriately advise patients on their use.

No single factor causes acne. It is a complex, chronic and common skin disorder of pilosebaceous units. The main factors involved include hyperkeratinization of keratinocytes,17, 18 increased sebum excretion from sebocytes through androgen stimulation, bacterial over-population and inflammatory cytokines. If the inflammation is near the surface, a pustule forms. If it is deeper, a papule or pimple forms—still deeper, and it becomes cyst. If oil breaks through to the surface, the result is a “whitehead” and if the oil oxidizes, changing from white to black, especially squalene, it results in a “blackhead.” Figure 1 shows the developmental stages of acne.

While the exact process and causes of acne may not yet be known, remarkable progress has been made in the past 15 years to understand mechanisms involved. This is thanks, in part, to the use of cell culture models and new molecular techniques. For example, mammal sebocytes and sebocyte-like cells, i.e., human, mouse, hamster and rat; and human sebaceous gland cell lines19, 20 including SZ95, SEB-1 and Seb-E6E7, which have been used in monolayer cultures as models to study specific functions involved in development, growth and differentiation of sebaceous gland cells.

Acne research continues to deliver new pieces to the puzzle. It suggests a multi-tasking strategy is needed to improve the conditions of acne-affected skin, including the following five considerations.

Taking these targets into consideration, a blend was designed combining hexylresorcinol (HR, see Figure 2) and ethyl linoleate (EL, see Figure 3) in skin-friendly caprylic/capric triglycerides; this blend will be referred to hereafter as HREL.

HR has a long history of safe and effective human use.21 In fact, Leonard et al. found it to possess more than 50 times the germ-killing power of pure carbolic acid—and although P. acnes may be the primary target for acne, broad antibacterial/antifungal activities are desired since affected skin also presents higher levels of Staphylococcus and candidas.22 HR also exhibits anesthetic, antiseptic and anthelminitic properties23 and can be used topically on small infections or as an ingredient in consumable carriers, e.g., throat lozenges.24

Furthermore, alkylresorcinols (ARs) are found in nature; alkyl chains ranging from C17:0-C25:0 attached to position 5 are abundant in whole-grain wheat and rye.25 However, the hexylresorcinol used in this study has a hexyl group at the 4 position; alternate names include: 4-hexylresorcinol; 4-hexylbenzene-1,3-diol; 1,3-dihydroxy-4-hexyl benzene and 4-hexyl-1,3-phenylenediol. ARs as a group are also reported to have antitumor, antibacterial, antifungal and anti-parasitic activities. These effects can be attributed to membrane-modulating effects due to interactions of their alkyl tails with phospholipids and/or proteins, and to antioxidant effects of the phenolic hydrogen.26

Ethyl linoleate is a neutral, lipid-soluble form of linoleic acid (LA), which is an essential fatty acid (EFA) necessary for skin nourishment. Interestingly, EL has been reported to hydrolyze to LA in vivo,28 suggesting it may hold numerous potential LA-like benefits.

For one, deficiencies in LA are linked to defective wound healing, growth retardation and dermatitis.29, 30 In fact, it has been shown that 10% LA, when applied topically to EFA-deficient mice for two weeks, can correct gross and histological skin abnormalities and reduce epidermal DNA synthesis to normal values.31 Furthermore, scaling and thickening of the skin can be reversed by topical application of LA-rich sunflower oil.32, 33 And LA has been shown to reverse detergent-induced barrier damage34—although it requires other free acids to restore barrier function and normal skin appearance.35

Another role of LA is to maintain the stratum corneum (SC) acid mantle, which is important for both impermeability and cutaneous microbial defenses.36 An acidic environment is necessary to activate pH-sensitive lipid hydrolases, converting phospholipids to free fatty acids in a sequence required for normal barrier function.36

Additionally, low levels of LA have been observed in the skin surface lipids of acne-afflicted patients. The biological functions of sebocytes are regulated by several factors, LA being one of them.37 Such functions include producing and secreting sebum to lubricate the skin, protecting it against friction and making it more impervious to moisture.

Lastly, a recent study showed that LA and other unsaturated fatty acids have anti-inflammatory activity.38 Cells pre-incubated with LA for 2 hr then stimulated with lipopolysaccharide for 24 hr in the presence of fatty acids showed significantly (p < 0.01) decreased secretions of interleukin (IL)-6, IL-1beta and tumor necrosis factor-alpha (TNFα). In addition, LA decreased IL-6, IL-1beta and TNFα gene expression (p < 0.05) and nuclear factor (NF)-κB DNA-binding activity, whereas peroxisome proliferator-activated receptor-gamma (PPARγ) DNA-binding activity was increased. These results indicate the anti-inflammatory effects of LA may be, in part, due to the inhibition of NF-κB activation via the activation of PPARγ.

On top of it all, LA lightens UV-induced skin pigmentation39 by accelerating the post-translational degradation of tyrosinase.40

Now, EL is more stable to oxidation than LA, as was shown by decreased amounts of it on the skin surface lipids of subjects treated for acne.41 In addition, EL was recently isolated42 from Oxalis triangularis (purple shamrock or clover), an edible perennial plant that can easily be cultivated. Taken together, these facts suggest EL could provide benefits similar to LA with the advantage of improved stability and ease of cultivation. One recent anti-acne clinical study using EL with triethyl citrate showed its potential efficacy;43 the author’s own studies are described in part II: the experimental portion.

HR indeed was found to be a broadspectrum antibacterial/ antifungal agent.

In addition, HR showed synergy when blended with EL, which has no antibacterial or antifungal activity at the dose tested.

Inhibition of NF-κB by HR, HREL, Curcumin and Resveratrol