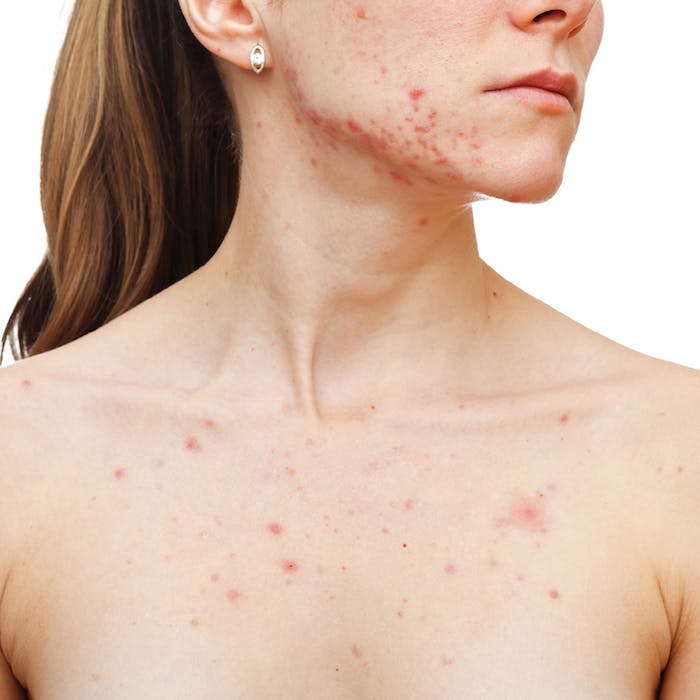 (continued from Part I)

Materials: As noted, a blend HR and EL (HREL)a was developed for the described studies. The HR used for this blend has a purity of at least 99% and is practically devoid of free resorcinol (< 0.05%)b. The EL used has a linoleic acid content of at least 70%c.

Antimicrobial efficacy of HR and HREL: Broad anti-bacterial and antifungal activities are also desired for anti-acne treatments since, as noted, affected skin has much higher levels of Staphylococcus and candida.22 An antimicrobial test for this study was carried out as per the Category 2, USP Pharmacopeia’s Compendia Products.44

Transcription regulatory activity of NF-κB: This assay followed the method described by Yang et al.45 HREL was first dissolved in dimethyl sulfoxide (DMSO) and further diluted into various concentrations with cell media, for a total 1% DMSO in each sample; media containing 1% DMSO only served as vehicle controls. The murine myoblast C2C12 cells, transfected with an NFκB luciferase reporter gene, were treated with the above cell media with different concentrations of product and fixed quantity of TNFα. The transcription regulatory activity of NFκB was quantified by adding luciferase assay reagent to each well and the luminance reading was then recorded.

Quantification of NF-κB protein: In a separate assay,46 human 293T cells were cultured in DMEM medium supplemented with 10% fetal bovine serum, L-glutamine and penicillin-streptomycin. Cells were seeded (1 × 105/mL) to a 24-well plate and cultured overnight. The culture medium was replaced by serum-free medium for 4 hr to “starve off” the serum. TNFα (100 ng/mL) and testing sample extracts were then added at a concentration of 1 mg/mL into each well, and cells were cultured at 37°C with CO2 for 1 hr.

Whole cell proteins were extracted and levels of NF-κB were measured using an ELISA kit. The levels of NF-κB protein of each sample were calculated against a standard curve, constructed using recombinant NF-κB standard.

Effects on PIH: Chaudhuri previously reported27 that HR is also effective in reducing hyper-pigmented spots without affecting the surrounding areas. Eighteen volunteers between the ages of 42 and 60 applied a 1% HR lotion twice daily in an amount sufficient to cover their upper arm, specifically targeting hyper-pigmented spots. The treated skin of each volunteer was evaluated and the percent reduction in pigmentation was determined using ITA0.

Anti-acne clinical study: A six-week clinical study of 10 subjects, ages 21.30 ± 4.54, was conducted including: five male and five female Caucasian (nine) and Hispanic (one) participants. Fitzpatrick Types included: II (two), III (six) and IV (two); all subjects presented with mild acne according to an expert grader—specifically: ≥ 5 and ≤ 20 total inflammatory and non-inflammatory lesions, and ≥ 3 inflammatory lesions. The subjects applied a 3% HREL lotion (see Formula 1) twice daily for the duration of the study.

Objective assessments of skin tolerance including dryness, erythema and edema, and subjective assessments of stinging, itching, tingling and burning all indicated the formula was well-tolerated. Photographs were taken of acne lesions, PIH and pores for image analyses. In addition, subjects completed a questionnaire and experts graded subjects regarding the effects of treatment compared with baseline for: 1) total acne lesions, 2) inflammatory acne lesions (whiteheads), 3) non-inflammatory acne lesions (blackheads), 4) PIH and 5) the overall texture/appearance of skin.

Transcription regulatory activity of NF-κB and quantification of NF-κB protein: Using two different methods, HR was shown to be a potent inhibitor of NF-κB, and as Table 3 shows, was even superior to the well-known inhibitors curcumin (see Figure 4) and resveratrol (see Figure 5). This inhibitory effect of the HR remained intact in the HREL blend (see Figure 6 and Table 3).

Effects on PIH: Previous studies showed that HR is an effective compound in reducing hyper-pigmented spots without affecting the surrounding areas.27 Furthermore, it stimulated endogenous antioxidant defenses, specifically glutathione, glutathione peroxidase and glutathione reductase.27 When compared with coloration on day zero (pre-application), the treated hyper-pigmented spots showed a statistically significant (p < 0.05) reduction of 39% and 60% in pigmentation at four and eight weeks, respectively (see Figure 7). On the other hand, the treated area of the skin surrounding the hyper-pigmented spots showed only marginal changes with no statistical significance when compared to day zero (pre-application).

Clinical study, subjective parameters: Subjective questionnaires were completed by panelists (and experts) based on three subjective parameters: pigmented spots, skin tone and roughness/dryness using a scale of 0 = no improvement; 1 = minimal; 2 = moderate; 3 = good and 4 = excellent improvement. Results indicated subjects had an overall positive response to the test product (see Figure 8 and Figure 9), i.e., 3% HREL lotion (Formula 1), as far as effectiveness in reducing the appearance of inflammatory and non-inflammatory lesions and PIH, and improving the overall texture/appearance of skin. After six weeks of treatment, all subjects saw a significant reduction in erythema (p = 0.015), with no incidence of worsening in any tolerance parameters, compared with baseline.

Clinical study, objective parameters: Clinical grading findings indicating a statistically significant reduction (p < 0.05) in acne lesions after three and six weeks of product use (3% HREL lotion; see Figure 10). Additionally, image analysis (see Figure 11) revealed a significant improvement in PIH as well as a reduction in average diameter (size) of pores and pore count after six weeks of product use. Note that the three-week data for PIH, average pore and pore counts was statistically not significant; six-week results for all four parameters, however, was significant at p < 0.05. Figure 12, Figure 13 and Figure 14 show subjects’ skin before (a) and after (b) treatment with 3% HREL lotion treatment for six weeks.

HREL represents a new blend of well-known ingredients that combines several mechanisms of action to clear away acne. Furthermore, it is theorized that by combining it with other anti-acne ingredients, described next, additional improvements in anti-acne properties can be achieved.

Bakuchiol, 0.25%: This ingredient can inhibit the formation of squalene peroxide, which promotes acne and roughens and wrinkles skin.47 Bakuchiol is an excellent lipid peroxidation inhibitor (IC50 = 0.61; IC100 = 1.46 µg/mL; squalene as a substrate) that is significantly more effective than natural tocopherol (IC50 = 30 µg/mL)48 and also has broad-spectrum anti-aging benefits.16

By extensively analyzing the various mechanistic pathways of acne, these authors describe the development of an ingredient blend based on hexylresorcinol (HR) and ethyl linoleate (EL) to treat acne. After six weeks of treatment with an HREL-containing product, 10 subjects experienced significantly reduced inflammatory and non-inflammatory acne lesions, PIH, and average pore diameters and pore counts, as well as overall improvements to the texture and appearance of their skin.

Significant reductions in erythema also were observed, with no evidence of worsening in any tolerance attributes, compared with the baseline. Interestingly, HREL was found to be more effective in inhibiting transcription regulatory activity of NFκ-B, compared with known inhibitors curcumin and resveratrol. While effective anti-acne products could be developed based on HREL alone, the authors note the appropriate selection of co-actives could theoretically prove even more effective.