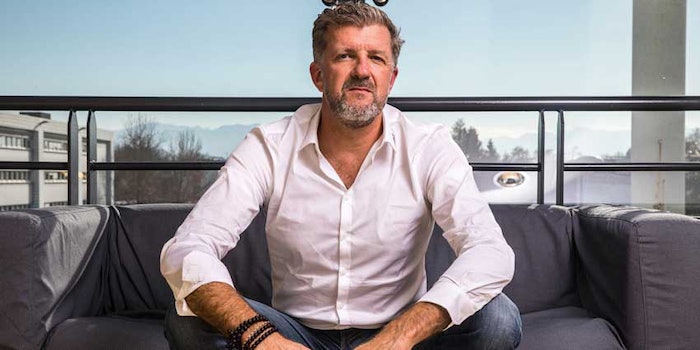 Cosmetic Valley organized the 6th edition of 'The Cosmetic Victories.' This worldwide competition rewards and promotes innovative projects related to the perfume and cosmetics industries.

Six finalists were chosen in February 2021 and winners were announced in March. In this interview, we profile bio-inspired microgels; more particularly, the spontaneous formation of self-assembled microgel films (SAMF), as described here by Laurent Billon, Ph.D. These bio-inspired microgels won the academic prize in the 2021 Cosmetic Victories competition.

What is your innovation? How is it used?

This ability can be used to encapsulate/release active ingredients. The water evaporation at the skin surface forms an adhesive, elastic and mechano-electrical film, which is used to gradually diffuse a cosmetic active ingredient.

What is novel about this technology? How might it shape the cosmetics and personal care market?

Moving beyond individual microgel particles, the SAMF by water or alcohol evaporation will be useful for skin care applications because they can interact on the skin as smart drug delivery systems, all while fulfilling advanced mechanical and optical properties together with surface protection.

In order to form SAMF, the attractive forces among microgel particles must be sufficient to allow their assembling and to avoid their redispersion with water. Previous research in this direction has been mainly focused on the creation between the particles of electrostatic/attractive interactions using layer-by-layer (LBL) coating processes or covalent chemical links, which require the external trigger to promote cross-linking of colloids, i.e., acidic condition or high temperature, in order to stabilize self-assembled microgel films. However, from the cosmetic applications point of view, such processes are not suitable for the spontaneous and in situ film-forming requirement; i.e., pH and temperature of the skin.

In this scenario, the advantage of SAMF is to use biocompatible smart microgels as cargo and functional building blocks. It has been demonstrated that these microgels are able to encapsulate an unexpectedly high content of functional particles or active hydrophobic/philic (biomacro) molecules as organic cosmetic ingredients while maintaining simultaneously colloidal stability, sharp thermo-responsiveness, intense collapse-to-swelling behavior and transparent film-formation ability at skin temperature.

SAMF can form multi-layered cohesive, adhesive and photonic films and present mechano-electric and mechano-chromic properties in an easy handling procedure based on water evaporation under ambient conditions, spontaneously and without any external triggers.

Where did your idea come from? (A market need? A new technology?)

The design of skin regeneration products was observed to need improvement with skin contact while keeping efficient drug penetration and relevant surface properties. The drug penetration efficiency is a challenging property because it usually faces the skin barrier function of the stratum corneum. Several advanced techniques have been developed to increase the skin drug permeability to efficiently invade the skin barrier.

Specifically, iontophoresis is a relevant technique based on the application of an electric field of low electrical potential difference, which facilitates the movements of ions across the skin barrier, enhancing the drug's skin penetration.

When electric fields are applied across a mechano-electrical actuator, a motion of mobile charges is observed according to the electric field (i.e., electro-phoresis mechanism), which is accompanied by an electro-osmotic flow of the solvent (i.e., electro-osmosis mechanism). Both phenomena improve drug penetration by increasing the porosity of the skin, thus lowering the skin barrier. The iontophoresis technique consists of enhancing the drug penetration by acting on both the drug mobility and the skin barrier.

Up to now, many studies have been focused on the use of self-supported transducers using a wide range of ionic gels. The mechano-electrical properties of a pH-sensitive macro-hydrogel have been used to generate an electrical potential.

Although ionic macrogels have demonstrated mechano-electrical transduction properties, their macroscopic scale strongly limits their use as smart advanced materials with multiresponse properties and avoids integration into cosmetic/health care formulas for direct use on skin.

Microgels nano-sized diameter, 300-800 nm, facilitates their exploitation in cosmetics as advanced materials and can open the possibility to carry and release drugs in the primary skin barrier in an adaptable way. On the other hand, the preparation of films of multilayer self-assembled microgels requires sufficient attractive forces between the particles to first allow assembly and then to avoid their re-dispersions.

The competition will give visibility to the functional microgels technology. . . and open the door to new partnerships with private/industrial companies.

Many efforts have been made to stabilize such highly hydrophilic self-assembled microgels films by the creation of electrostatic or covalent interactions between particles, requiring catalytic conditions (high T or acid condition), successive steps/long-period of casting to induce efficient microgels self-cross-linking, which contrasts the spontaneous film-forming requirement for cosmetic or health care applications.

We have investigated the potential use of oligo(ethylene glycol) (OEG) as biocompatible, adhesive and elastic building blocks to synthesize microgels as advanced functional materials. These microgels would present the ability to be self-assembled into cohesive films with relevant instantaneous and reversible mechano-electrical transduction properties upon compression.

What product development challenges did you face in creating this innovation? What skills or technologies supported your success?

The technology is based on polymerization by precipitation in water media using biocompatible monomers without any surfactants. From the colloidal dispersion (milky solution), cohesive and adhesive films can be spontaneously created by an endothermic bottom-up process, i.e., water evaporation, with a fresh/cool feeling.

These self-supported films, which present a cohesive behavior until 150% of elongation can be used as active molecules-loaded patches. Otherwise, the SAMF can be highlighted by their ability to create mechano-chromic film when hybrid microgels are used.

Functional groups for wet adhesion can be easily added from the synthesis to enhance their mucoadhesive properties for cancer treatments. The polymerization process is versatile enough to incorporate functional comonomers on demand.

What outcome do you anticipate from the competition? From your work?

The competition will give visibility to the functional microgels technology that was developed in IPREM for 10 years and open the door to new partnerships with private/industrial companies. Both microgels or the new inspiring projects would be then driven by sustainable product developments and technical innovations for not only cosmetics but also health care or medicine. With a family of 7 patents on microgel technology and versatile innovation, a start-up creation is envisaged at a short horizon time.