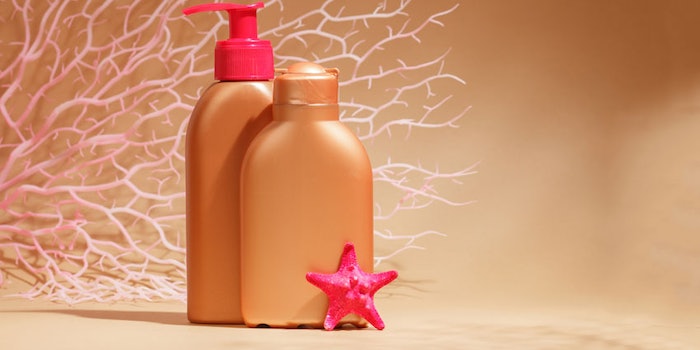 Research has shown that methylene blue could be an effective alternative to organic sunscreens alleged to cause coral damage.
Photo 166861121 © Rudikovskaia Nataliia | Dreamstime.com

A study published in Nature Scientific Reports has found that methylene blue holds potential as a highly effective broad spectrum UVA and UVB filter. In addition, it repairs ROS and UV irradiation-induced DNA damage while being safe for coral reefs.

The study proposed the material as an alternative to organic sunscreen ingredients. According to the report, 80% of today’s sunscreens use oxybenzone as a chemical UV filter, despite studies implicating its destruction of coral reefs. Several states and countries have banned the use of oxybenzone and its derivatives to stop the effects on the world’s marine ecosystem.

The research team, which included scientists from Mblue Labs and the University of Maryland, reportedly observed the UV protection benefits of methylene blue from several angles in primary human keratinocytes and skin fibroblasts from young and old donors, and compared those results with oxybenzone. They concluded methylene blue not only absorbs UVA and UVB as traditional sunscreen actives do, but also helps to repair DNA damage caused by UV irradiation, thereby leading to better cell survival.

The team additionally exposed the same amounts of methylene blue and oxybenzone in Xenia umbellate, a soft coral species, in isolated tanks and monitored coral reefs’ growth and responses to these chemicals. They reported drastic coral bleaching and death in oxybenzone-treated Xenia corals in less than one week, while methylene blue appeared to have no negative effects on coral health, even at a relatively high concentration.

Researchers also compared methylene blue with other skin care antioxidants such as vitamin A (retinol) and vitamin C for their ability to reduce cellular oxidative stress. Findings indicated methylene blue was the most effective ROS scavenger in human cells. In addition, the material combined with vitamin C provided synergistic activity.

The authors on the study concluded that altogether, the study suggests that methylene blue has the potential to be a coral reef-friendly sunscreen active that can provide broad spectrum protection against UVA and UVB.”

Based on these findings, a patent application has been filed and work has begun to develop sunscreen prototypes containing methylene blue. In addition, Mblue Lab (Bluelene) launched its first multifunctional skin care product that combines methylene blue and vitamin C to deliver anti-aging effects in Bluelene's Night Plus+ product.

“Our work suggests that methylene blue is an effective UVB blocker with a number of highly desired characteristics as a promising ingredient to be included in sunscreens," said Kan Cao, Ph.D., founder of Mblue Labs, Bluelene Skincare and professor at the University of Maryland. "It shows a broad spectrum absorption of both UVA and UVB rays, promotes DNA damage repair, combats reactive oxygen species (ROS) induced by UVA, and most importantly, poses no harm to coral reefs.”

“We are excited to see those skin fibroblasts, derived from both young and old individuals, have improved so much in terms of proliferation and cellular stress in a methylene blue-containing cell culture medium,” Cao continued. “Most surprisingly, we found that the combination of methylene blue and vitamin C could deliver anti-aging effects, particularly in skin cells from older donors—suggesting a strong synergistic reaction between these two beneficial antioxidants.”