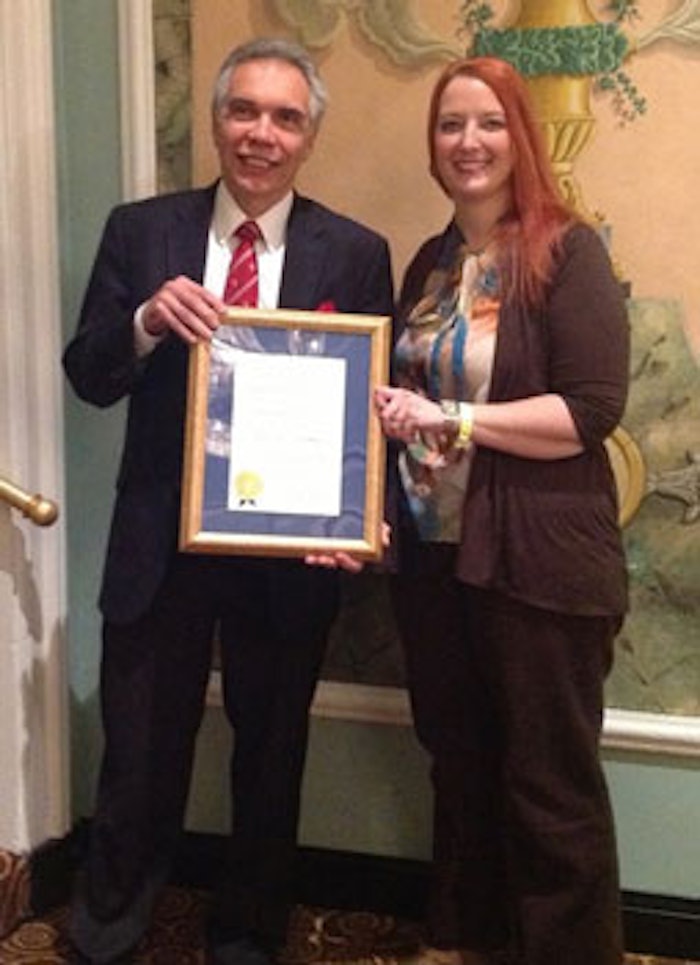 At the Awards Luncheon, Rachel Grabenhofer awarded the Frontiers of Science Award, which is sponsored by Cosmetics & Toiletries, to Joseph Schwarcz, PhD.

On Dec. 12, 2013, at the Society of Cosmetic Chemists' (SCC) Annual Scientific Meeting & Technology Showcase, Rachel Grabenhofer, presented the Frontiers of Science Award to Joseph Schwarcz, PhD, from McGill University, on behalf of Cosmetics & Toiletries. Earlier that morning, Schwarcz delivered his award lecture on miscommuncation between the cosmetic industry and the general public's consumers and media.

According to Schwarcz, "In this era of chemophobia, people want to raise their kids in a chemical free environment. We have come down so far from the 1960s, when chemistry was flying high Today you have to apologize for being a chemist."

He continued that quakery is rampant, but cosmetic chemists and scientists in general have to stand up to them. "We have to use our tools and the most powerful tool in our toolbox is peer-reviewed scientific literature," added Schwarcz.

Schwarcz highlighted some of the misunderstandings about cosmetic ingredients. Regarding lead in lipstick, he noted, "You would have to eat five lipsticks a day to create harm." He also pointed out that some of the research supporting endocrine disruptors is inaccurate, adding that resveratrol is an endocrine disruptor. He noted that the original research claiming that parabens in antiperspirants disrupted the endocrine system had no controls. He added that while parabens do have endocrine potential, they have far less estrogenic potential than other chemicals. They occur naturally in nature in the pheromone of a dog. "That is what dogs are sniffing for when looking for a mate," he explained. "The is a notion that nature is good and synthetic is bad, which I have to confront this a lot in my career, but there are more parebens in blueberries than in a cosmetic product."

He concluded that one can make anything dangerous with selective use of words. "We have to talk about numbers; science is based on numbers" He provided a list of chemicals naturally found in apples, including formaldehyde and acetone. "We will find toxic chemicals in everything," he noted. "Risks can easily be identified, usually by alarmists who have agendas." He emphasized that effects depend on molecular structure not on whether a compound is synthetic or natural.  Also, he added that children are not small adults, and when scientists look at toxicology, they have to look at infants differently. He finished by noting, "Science can never prove that there is no risk associated with a chemical. Education is where it is at."

Check back with Cosmetics & Toiletries later this week for the full report from the meeting.