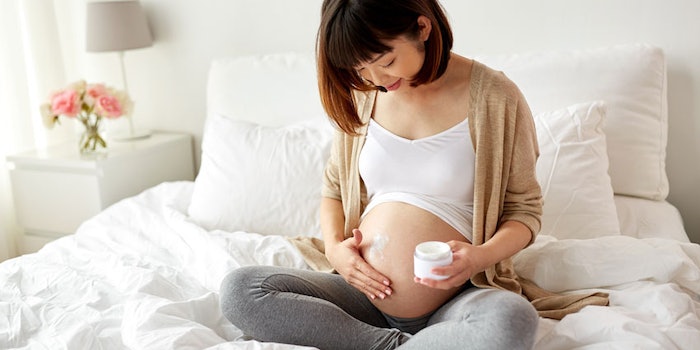 Personal genetics company 23andMe has conducted a genetic study on striae distensae (stretch marks) to identify genetic markers for the skin imperfections and determine why some individuals are more susceptible. The study, “Genome-wide association analysis implicates elastic microfibrils in the development of non-syndromic striae distensae,” appeared in the Journal of Investigative Dermatology.

The prevalence of stretch marks is estimated at 50-80%; however the exact causes of stretch marks are still widely unknown. Many factors, including excessive skin distension (during pregnancy, growth spurts and rapid weight gain), prolonged exposure to cortisol and genetics are thought to play a role. Popular treatments, including topical creams and laser removal often focus on stimulating collagen production to decrease the appearance of stretch marks.

Researchers looked at 33,930 customers of European descent who responded to a survey, 13,930 of whom were cases (reported stretchmarks) and the rest (20,862) were controls (reported no stretchmarks). Four regions were significantly associated with stretch marks. The most strongly associated SNP in the first region, rs7787362, lies 40kb upstream of the ELN (elastin) gene. It was also associated with striae gravidarum in the pregnancy cohort. The second association, rs35318931, is a missense variant (serine to phenylalanine) in the SRPX (sushi-repeat containing protein, X-linked) gene. It is associated with striae gravidarum in the pregnancy cohort. Very little is known about the function of this gene. The third association, rs10798036, which did not reach significance in the pregnancy cohort, is located in the HMCN1(hemicentin-1) gene. Mutations in HMCN1 have been associated with age-related macular degeneration. As there are no other clear gene candidates for the associations at these loci, it is unclear how these regions might be related to the risk of developing stretch marks. The final genome-wide significant association, rs7594220, is located 3kb downstream of TMEM18 (transmembrane protein18), which is involved in neural stem cell migration and cancer but has also been associated with obesity and obesity-related traits. This SNP is in linkage disequilibrium with SNPs previously associated with body mass index (BMI), and correcting for BMI weakens this signal, although not the signals for the other three genome-wide significant hits.

Three additional regions show suggestive evidence of association with stretch marks. Of these, rs3910516 is of particular interest, as it lies 2.2kb upstream of FN1, which encodes fibronectin, an extracellular matrix protein that binds to collagen and integrins. Skin biopsies from individuals with stretch marks demonstrate reduced expression of fibronectin. The SNP downstream of PNPLA1 is also interesting, as mutations in PLPLA1 are associated with autosomal recessive congenital ichthyosis, a rare skin disease. None of the suggestive associations were found in the smaller pregnancy cohort.

The research supports the hypothesis that variations in the elastic fiber component of the skin extracellular matrix contribute to the development of stretch marks. The expression of collagens, elastin, and fibronectin is decreased in striae, which could be linked to the reorganization and overall loss of elastic fibers in skin affected by striae.

The researchers are confident that this research connecting elastin and stretch marks can lead to better treatments. “Through this first of its kind study, we’ve identified new genetic associations that can provide deeper insights into the root causes of stretch marks, and look forward to continuing research in this space," noted Joyce Tung, PhD, director of research for the company.

The research teams plans to continue the study, investigating the effect of genes associated with obesity and the development of stretch marks. It also plans to replicate the work in a more precisely phenotyped population and look at possible associations in non-European populations.