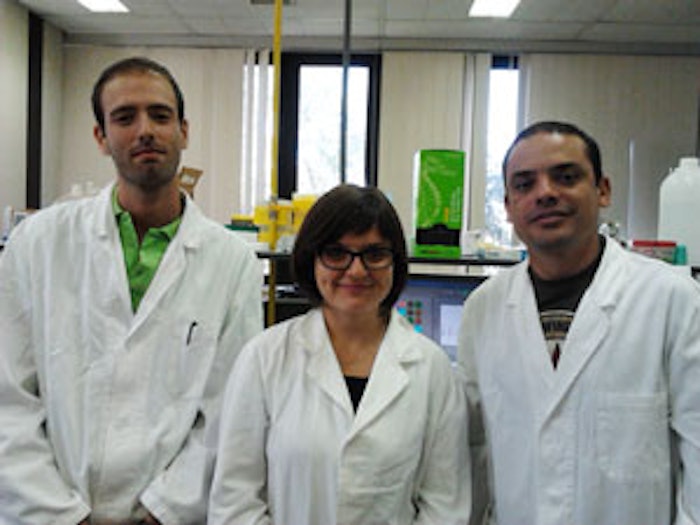 Strawberries are widely enjoyed both unadorned and in a number of desserts for their sweet taste and nutritional benefit. Although many people are aware of the vitamin C content in strawberries—160% daily value in one serving (approx. 5.3 oz.) according to the US Food and Drug Administration1—their consumption or application may also provide UV protection to skin.

Francesca Giampieri and colleagues at the Università Politecnica delle Marche, headed by Maurizio Battino, PhD, initially sought to characterize and genetically improve the nutritional quality of several strawberry genotypes. In undertaking this research, according to Giampieri, the team found that anthocyanin has a number of activities that could benefit humans. “Aside from the photoprotective activity,  [anthocyanins] possess strong anti-inflammatory, antioxidant, anti-mutagenic and anti-carcinogenic properties and are able to modulate enzymatic pathways. Thus, they play a role in preventing human diseases related to oxidative stress,” noted Giampieri.

The team was interested in evaluating the effect of acute and prolonged strawberry consumption on the antioxidant status in animal and human subjects. The high phenolic content of Fragaria x ananassa (Sveva cultivar), referred to as the garden strawberry, was first identified and its photoprotective benefits investigated.

“The high nutritional quality, especially in terms of anthocyanin content, of the strawberry Sveva cultivar has been particularly reported, so we decided to test the Sveva extract for its potential photoprotective activity, [on human skin]” said Giampieri. “We aimed to verify if [an] anthocyanin-rich strawberry extract showed a photoprotective property in human dermal fibroblasts.”

To test the protoprotective effect of the strawberry extract, the team added it at 0.05, 0.25 and 0.5 mg/mL to fibroblast cell cultures. The team capped the dosage at 0.5 mg, as a higher dosage appeared to be toxic to cells. There was also a control, where the fibroblast cell culture was not treated. The cultures were then exposed to UVA radiation and assessed using an MTT (3-(4,5-dimethylthiazol-2-yl)-2,5-diphenyltetrazolium bromide) assay. Control cells and cells pre-treated with different concentrations of strawberry extract were analyzed to determine the photoprotective activity of the strawberry extract and to observe if its protection was dose-dependent. “We found that cells pre-incubated with the lower concentration of the extract exhibited vitality similar to the control, while the cells pre-incubated with higher concentrations of the extract showed higher survivabilty. In particular, cells treated with 0.5 mg/mL exhibited a significant difference in vitality,” reported Giampieri. Cells did not show significant difference in vitality at higher UV exposures, according to Giampieri. She explained, “This outcome is likely due to the depletion of the protective capacity of strawberry extracts after high UV treatments.” She adds that many studies have also found anthocyanin-rich extracts to be capable of protecting cells such as fibroblasts against UVB radiation; although her work focused on UVA.

UVA radiation causes oxidative damage through generation of reactive oxygen species (ROS), which can interact with cellular biomolecules such as nucleic acids, proteins, fatty acids and saccharides (5), altering the redox status of the intracellular location, according to Giampieri. Therefore, the team believed that anthocyanins, due to their antioxidant capacity, could decrease the amount of intracellular ROS caused by the UVA radiation and reduce the damage to cell structures, including DNA. Therefore, the team assessed whether the strawberry extract could provide DNA protection.Control cells and cells pre-incubated with the extract were exposed to UVA radiation for 15 min and processed according to the Comet assay protocol.

“Consistent with the vitality assay, DNA damage was observed in control cells and cells pre-incubated with the lower concentrations of the extract (0.05 mg/mL),” explained Giampieri. “Conversely, cells pre-treated with 0.25 mg/mL and 0.5 mg/mL showed a significant decrease in DNA damage in comparison with the control.”

Giampieri finds great value in her team’s results and believes that they could lead to the prevention of cancer and skin-related inflammatory and degenerative illnesses.

“At the moment the results act as the basis for future studies evaluating the bioavailability and bioactivity of anthocyanins in the dermis and epidermis layers of the human skin, whether by adding them to formulations for external use or by ingesting the fruit itself. The team also plans to verify the photoprotective effects of other cultivars rich in anthocyanins. In addition, they plan to test the anthocyanins purified from the same extract for their UV protection in human dermal fibroblast.

Should topical application of the strawberry extract be found to protect humans better than ingestion, Giampieri notes the fruit also contains a number of other antioxidant compounds with skin benefits such as ellagitannins, flavonols and vitamins.