What's in a name? In this case, major differences in chemistry and form.

A great deal of interest has recently been expressed over the chemistry and terminology used in the preparation of silicones, especially as replacements for D4 and D5 are sought. As such, this column aims to provide an understanding of the relationships between these raw materials and the silicones found in personal care.

Silicon dioxide is also the starting point for making silicone polymers, although the process for making them is equipment-intensive and produces a number of different materials. As such, finding commercial uses for each intermediate in the process is necessary in order to run the plant in a cost-effective manner. The few plants that actually start with the silicon element, described next, and process it all the way through to silicone polymers are called crushers; there are only a handful of companies in this group.

Silicon is element 14 on the periodic chart (see Figure 1). While it is an abundant material, it rarely is found in its elemental form.

Silicon can also be made by the reaction of silicon dioxide and a source of carbon. This reaction, shown in Figure 2, requires a high temperature, and produces CO2 and a product with a melting point of 1,414°C:

The conversion of quartz to silicon is an amazing transformation. Figure 3 shows the starting quartz in the upper left and the resulting silicon in the lower right.

The resultant silicon—without an e on the end—is ground into a fine powder and reacted with methyl chloride to make chloro-silanes via the Rochow Process. This reaction is shown in Figure 4: 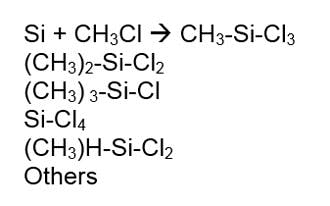 Chlorosilanes are then hydrolyzed by the addition of water, resulting in a liberation of HCl and a variety of species known as hydrolysates. The hydrosylates are then fractionated to yield the raw materials needed to make silicone polymers. Silanes as a group have only one Si in their molecule. Octyl trimethoxy silane is one example, shown in Figure 5:

The term silicone, also called polysiloxane, describes a group of polymers that have repeating groups, as depicted in Figure 6.

The simplest polydimethylsiloxanes are fluids, which are sold by viscosity. Figure 7 shows the most common-viscosity silicone fluid sold, and the approximate non-blended molecular weight.

The molecular weight to viscosity relationship is shown in Table 1: 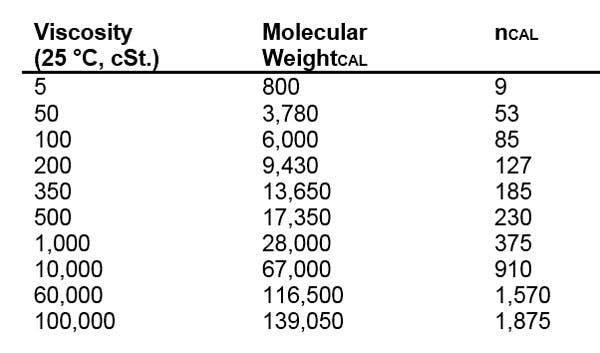 Organo-functional materials are made by a process called hydrosilylation. This process reacts alpha unsaturation with silanic hydrogen (Si-H) to make a new Si-(CH2)3-R product.