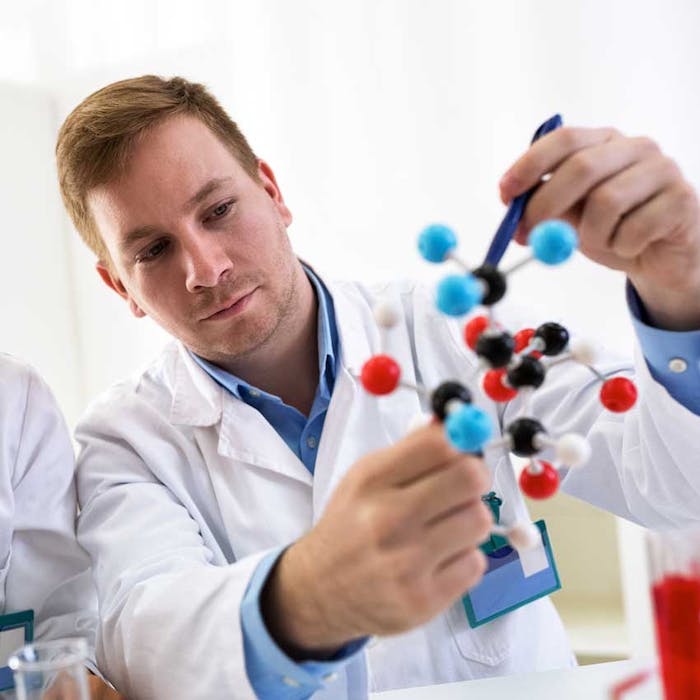 PEG and PPG have been used in personal care for many years. These materials are also used in the biotechnology area, and in anti-foam compositions. The chemistry of PEG, PPG or combinations thereof in blocks or random chains have an impact on the functional properties of formulas. Knowledge of these materials will help the chemist understand both the effects of reacting these materials on fatty alcohols, and the performance of emulsifiers and wetting agents.

The term PEG (polyethylene glycol) refers to a class of polymers having the CAS number 25322-68-3 that are made by the reaction of ethylene oxide with ethylene glycol. This reaction is shown in Table 1.

PEG polymers are sold by molecular weight, which in turn means by the n value, as specified above. Typical properties for PEGs are shown in Table 2.

PEGs have great solubility in water, as they are soluble in all proportions at temperatures below the boiling point of water. This ability to interact with water is a major reason these polymers are used in formulation. PEG units are added to water-insoluble alcohols by the process of ethoxylation, providing a wide variety of surfactants (see Table 3).

PEG polymers can be made to meet the requirements of food additive regulations for indirect use as components intended to come into contact with food.1 PEG is also used as an inactive ingredient in the pharmaceutical industry, serving as a solvent, plasticizer, surfactant, ointment and suppository base, and as a tablet or capsule lubricant. PEG has low toxicity with systemic absorption of less than 0.5%.2

The term PPG (polypropylene glycol) refers to a class of polymers having the CAS number 25322-69-4 and made by the reaction of propylene oxide with propylene glycol. This reaction is shown in Table 4; Table 5 shows typical PPG properties.

There are three salient functional differences between PEGs and PPGs. The first is water solubility, the second is liquidity and the third is the type of hydroxyl group present.

The presence of the methyl group in PPGs precludes the formation of crystalline solids and keeps PPGs liquid at high molecular weights. On the other hand, PEG 600 has a melting point of 19°C.

Another difference, due to the methyl group, is the presence of secondary hydroxyl groups in PPG, which are less reactive than the primary hydroxyl groups in PEG. Lastly, it is well-known that PPG is less toxic than PEG, so biotechnology companies often replace PEGs with PPGs as solvents in pharmaceutical applications.3 A detailed summary of the safety assessment of alkyl PEG/PPG ethers as used in cosmetics is available from the Cosmetic Ingredient Review panel.

A surfactant is a compound that contains two or more groups that have different solubilities; generally one part is water soluble and the other is oil soluble. Since PEG is water soluble and PPG is water insoluble, polymers that contain both of these groups will act as surfactants. This is, in fact, what we see in a class of compounds called poloxamers. The structure of two types of poloxamers are shown in Table 6.

Poloxamers are nonionic triblock copolymers composed of a central hydrophobic chain of polyoxypropylene (poly(propylene oxide)), PPO, flanked by two hydrophilic chains of polyoxyethylene (poly(ethylene oxide)), PEO. The word poloxamer was coined by the inventor, Irving Schmolka, who received the patent for these materials in 1973.4 It is interesting that this patent has been referenced in 165 subsequent patents as prior art.

Since the lengths of the polymer blocks can be customized, many different poloxamers exist that have slightly different properties. For the generic term poloxamer, these copolymers are commonly named with the letter P, for poloxamer, followed by three digits.

"... Another polymer, (poly(ethylene glycol-ran-propylene glycol)), is typical copolymer of ethylene oxide and propylene oxide with disordered structure. So the properties of such a copolymer could be expressed as averaged properties of PEG and PPG polymers without any characteristic features of the structural fragments along the copolymer chain.”7

Poloxamers have the water-insoluble PPG in the center and the water-soluble PEG groups on the outside. Here, a ranges from 2-130 and b ranges from 15-67, and the ratio of a:b determines the specific properties. Poloxamer uses are outline in Table 7. 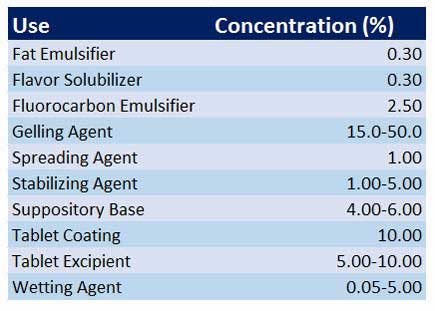 Poloxamer polymers (see Table 8) are PEO/PPO linear block copolymers as well, with the configuration of: PEO-PPO-PEO. In contrast, reverse poloxamer polymers are PEO/PPO linear block copolymers but with a change in the configuration of the blocks: PPO-PEO-PPO. Here, since the hydrophobic blocks are now in the outer portion of the chains, their behavior in water is different.

Water is a selective solvent for the ethylene oxide blocks in PEO/PPO copolymers. For the regular poloxamer configuration, spherical aggregates are easily formed since PPO blocks are placed inside the core, protected from the solvent by the outer PEO blocks.

In the reverse poloxamer (PPO-PEO-PPO), however, chains don’t easily form micelles. Rather, they form another type of aggregate such as flower-type micelles.

Finally, the realization that polypropylene oxide could be placed in a block manner into a silicone molecule emerges in U.S. Patent 8,153,106, which claims a silicone polymer. Its INCI name is PEG-9, PPG-9 dimethicone; this structure shown in Table 9. If the EO and PO were on the same Si group, the name would instead be PEG/PPG 9/9 dimethicone.