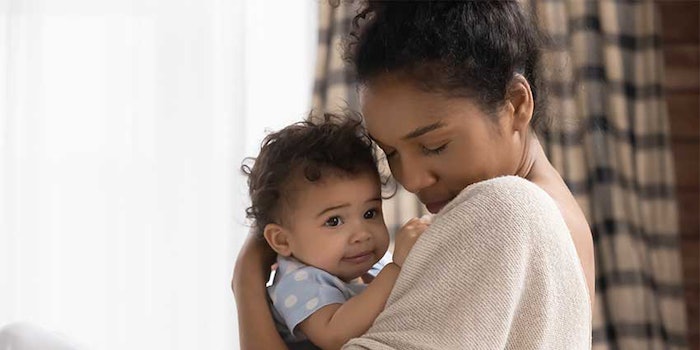 Baby-smooth skin is considered the holy grail of cosmetic aspirations for adult consumers. At the same time, infant skin is frequently characterized as delicate and fragile. It is well-known, for example, that infant skin is prone to certain types of dermatitides such as diaper rash. Moreover, there has been a rise in the incidence of atopic dermatitis in infants during the last few decades,1 which is frequently attributed to incorrect use of skin care products that are harsh on baby skin.

This paradox of baby skin having properties desired by adults yet being much more sensitive exemplifies the fact that baby skin is different than adult skin. Nevertheless, little has been published about such differences.2 On the contrary, many works have been published in which researchers believe the skin structure and function is fully developed in babies at birth or a few weeks after birth.3-4

Thus, research has more recently explored and objectively documented possible differences between infant and adult skin in terms of structure, function, and biochemical composition. Due to the sensitive nature of the participants in such studies, it is necessary to use noninvasive methods that are tolerable to both adults and infants.

Although the effort is ongoing, it has already provided ample scientific evidence supporting the uniqueness of baby skin compared to adult skin. This unique status of baby skin dictates the necessity of carefully formulating skin care products that specifically cater to the needs of baby skin. For the purpose of this discussion, adult skin refers to individuals more than 20 years of age, and baby or infant skin refers to infants less than one year old, although many observations can be extended to the skin of toddlers ages 1–3.

Typically, skin is described as having two structurally distinct layers—the epidermis on top and the dermis below—cushioned beneath by subcutaneous fat. The epidermis is primarily cellular while the dermis is comprised of supportive extracellular matrix, mainly collagen and elastin fibers. The dermis is sparsely populated by cells but densely populated with fibroblasts.

The epidermal cells in their plurality are epithelial cells called keratinocytes, which change in morphology and function (i.e., they differentiate) as they move upward toward the skin surface. Their differentiated state defines distinct sub-layers within the epidermis: the basal, spinous, granular and corny layers. The top layer, also known as stratum corneum (SC), is where the elements responsible for the barrier function of skin reside. The dermis can be divided further into the papillary dermis and the reticular dermis, both characterized by different sizes of collagen and elastin fibers that give rise to different mechanical properties. This organization of cutaneous tissue structure can be observed both in adult and baby skin. Distinct differences, however, are microscopic. An examination using in vivo video microscopy and beginning with the skin surface revealed a denser network of microrelief lines on baby skin compared to adult skin (see Figure 1).5

In vivo laser scanning confocal microscopy was used to noninvasively image baby and adult skin in transverse optical sections parallel to the skin surface.5 The images were then analyzed to produce quantitative data on the thickness of the epidermis and its sub-layers, as well as the size of the cells that populated these layers. It was reported that baby SC is approximately 30% thinner than adult skin, and that baby epidermis is 20–30% thinner than adult skin. This was measured at the same body site since skin thickness varies with body site.5 Furthermore, in the baby SC, the projected cell surface area was approximately 20% smaller than adult skin on average. Similar differences in cell projected area were found at the granular layer, the layer just below the SC.

This smaller cell size at the topmost layers of the skin is indicative of higher cell turnover rate in the baby epidermis and can explain, for example, the improved wound-healing properties in infants compared to adults. Moreover, it is in line with published observations that the epidermal cell proliferation rate is decreasing with age throughout life.6

Structural differences also have been observed in the dermal layer. In vivo laser scanning confocal microscopy confirmed previously published observations of histological studies7 that baby dermis is composed primarily of short collagen fibers, the type found in the adult papillary dermis that give low reflectance signal. Microscopy further confirmed the apparent absence of the reticular layer at the observed depths in contrast to adult skin.5 This finding is directly relevant to the mechanical properties of baby skin in terms of it being softer and more elastic than adult skin.

Researchers recently published on the differences between infant and adult skin in the formation of skin barrier.8 Apart from defining the physical limits of the body in space, there are several ways that skin tissue provides a barrier between the body and the outside world. These include acting as a physical barrier such as for thermal protection; a chemical barrier, to keep pollutants out; and a biological barrier to protect against microbes and allergens. As a physical barrier, the skin also prevents internal tissue dehydration by locking in moisture.

Water barrier function is typically measured by the rate of transepidermal water loss (TEWL) and in recent studies, baby skin was found not only to have higher rates of TEWL than adult skin, but also a higher variability in the data—confirming the notion that baby skin barrier is not fully developed.8

Although widely used in the literature, TEWL measurements may be influenced by factors unrelated to the SC water barrier.9 When comparing baby and adult skin, researchers found the differences in TEWL measurements were confirmed with skin conductance measurements involving water absorption and desorption.10 According to this protocol, skin conductance is measured at the baseline, then a drop of water is applied on the skin for a specified time, after which it is blotted off. Skin conductance measurements are subsequently performed at regular time intervals. The difference between the baseline and the first measurement following the application of the water drop is indicative of the tissue’s capacity to absorb water. The rate at which water is lost from the cutaneous tissue during the subsequent measurements until skin conductance reaches the baseline value is indicative of the capacity of the skin to hold on to the externally applied water (water desorption) (see Figure 2).

Using this protocol, infant skin was found to absorb more water than adult skin and to lose this water following faster kinetics.8 Interestingly, adult skin appeared to involve a single mechanism of desorption, while baby skin apparently involved a second, faster one.

Since the barrier function of skin is localized in the SC, the authors investigated possible compositional differences between adult and infant SC.

Due to the difference in water-handling, the first substance investigated was water; it was found that the water content of baby SC was higher overall than adult SC but as in the case of TEWL, the statistical variability was much higher in baby skin (see Figure 3).8

In vivo Raman microspectroscopy is a noninvasive methodology that allows for the calculation of concentration profiles of certain substances through the SC.11 The requirement is that the substance of interest needs to have a characteristic signal in Raman spectroscopy. Water is such a molecule, and this method can be used to look at the distribution of water through the first 20–30 µm from the skin surface.12 In accordance with the skin conductance measurements, in vivo Raman microspectroscopy confirmed that water concentration is higher in infants than adults.8 Moreover, this highly specific method confirmed the difference in water desorption dynamics mentioned above.

Certain protein breakdown products, such as small amino acids, urea, pyrrolidone carboxylic acid, ornithine, citrulline, urocanic acid and others, are considered to play a role as the skin’s own humectants by binding and holding onto water and keeping the SC at normal levels of moisturization. These are known in the scientific literature as natural moisturizing factor (NMF). Many of these molecules have characteristic signals in Raman spectroscopy; therefore, their concentration can be monitored using this methodology.11 It was reported that the concentration of NMF was lower in infant skin than when compared with their biological mothers’ skin.8 Furthermore, the concentration profile through the SC depended on the infant’s age, with older infants more closely resembling the profiles of their mothers.

Thus far, infant skin has been shown to be different than adult skin in structure, function, and composition. This evidence underscores the necessity of careful formulation rules for the design of baby skin care products. Baby cleansers need to be as mild as possible, and baby skin care formulators must consider surfactant-tissue interactions.14 As discussed, lipids in baby skin are substantially less than in adult skin and the barrier function of baby skin is not yet fully developed. Harsh cleansers can easily affect the delicate infant skin barrier, potentially allowing easy penetration of irritants,  allergens, etc., and propensity for microbial infections.

Due to the weak nature of baby skin barrier, it is vulnerable to conditions of occlusion and friction, e.g., in the diaper area. Use of appropriate barrier creams in this area can be beneficial both for treating and preventing skin irritations.

Baby skin differs from adult skin in several basic ways. Microscopically one can detect differences in the elementary structure of the epidermis and the dermis. The most basic skin function, the barrier function, is not fully developed in infants. The chemical composition of the SC is different in baby skin compared with adult skin, which can in part explain the disparity in the capacity for their barrier function. These characteristics must be considered when formulating skin care products for babies.

6. GN Stamatas et al, Facial skin fluorescence as a marker of the skin’s response to chronic environmental insults and its dependence on age, Br J Dermatol 154(1) 125-132 (2006)

8. J Nikolovski et al, Barrier function and water-holding and transport properties of infant stratum corneum are different from adult and continue to develop through the first year of life, J Invest Dermatol 128(7) 1728-1736 (2008)