Enhancing Hair Health: Effects of Oiling, Inside and Out—Part II 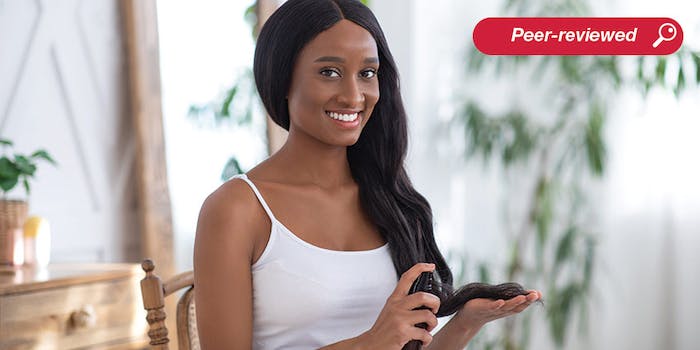 Read the full article in the July/August 2021 digital edition. . .

Healthy, well-groomed hair is often linked to the confidence of an individual, as well as their perception by others. In fact, clinical studies have validated the hypothesis that dry, damaged and unhealthy hair distorts the observers’ perception of attractiveness, health and age.1

In relation, hair oiling, as described in part I, is one of the earliest known hair care regimens. The ayurvedic treatment of head massage using oil, or Shiroabhayanga, is known to reduce scalp dryness, increase blood circulation to the scalp and provide hair with strength, shine, thickness and softness.2 Interestingly, the Sanskrit word for oil is sneha, which also means love.3 As such, saturating hair with oil is believed to provide a similar sense of care and nurturing as being filled with love.

Studies related to hair-oil interactions in terms of surface benefits are covered in part I of this review. In addition, key functional hair health parameters, such as strength and softness, are governed by the deeper cortex, and the literature also describes hair-oil interactions benefitting the hair core; this is the focus of the present review. Here, the authors focus on the currently available scientific studies describing hair oil treatments to benefit and modify the internal structure of hair.

Generally speaking, the penetration of molecular constituents of oils into hair fiber cross sections is governed by several factors. These include the affinity of the oil for the hair fiber surface and its ability to navigate through the intercellular diffusion pathway of the cell membrane complex (CMC).4 Molecular mobility depends upon the molecular size, molecular weight (< 1000 Da), Van der Walls volume and viscosity of the oil.

In terms of molecular structure, as the literature indicates, polyunsaturated oils may create triglycerides with more “open” structures that find it more difficult to penetrate the CMC. Additional factors include polarity, or the active functional groups, dipole moment and polar surface area. Also, the surface energies of the penetrating oil and the components of the CMC—the “contact zone” of the d-layer and possibly the lipid bi-layer domains of the b-layer. Finally, the measure of hydrophobicity: octanol water partition coefficient.

Specific examples of the above factors include a 2001 study using secondary ion mass spectrometry (SIMS) in combination with a time-of-flight (TOF) mass spectrometry. This showed the difference in penetration of coconut oil and mineral oil in human hair.5 Ion spectra and images clearly identified coconut oil within the hair fiber cross section. Its diffusion ranged in depth from partial to complete penetration. Mineral oil, on the other hand, was not detected within the hair fiber cross section. The difference was due to the polarity of the two oils. Coconut oil, being a triglyceride, is polar compared with the nonpolar mineral oil. Therefore, coconut oil had a greater affinity for the cortex of hair, which is also polar in character.

Building on this work, the penetration of other vegetable oils was studied using ToF SIMS.6 These results showed that olive and avocado oils were better absorbed into hair than sunflower and jojoba oils. This work postulated that polyunsaturated oils may create triglycerides with more “open” structures that, as noted above, find it more difficult to penetrate the CMC in the fiber. It was also suggested that apart from molecular size and structure, the interactions between surface energies of penetrating oil and components of the CMC (i.e., the d-layer “contact zone” and possibly the b-layer “lipid bi-layer” domains) are factors in the extreme differences in penetration profiles.

Coconut oil, being a triglyceride of lauric acid, has a high affinity for hair proteins and because of its low molecular weight and straight linear chain, can penetrate inside the hair shaft. Mineral oil, a hydrocarbon, does not penetrate. Sunflower oil is a triglyceride of linoleic acid with a bulky structure and double bonds, and has limited penetration into the fiber. Olive oil is composed mainly of the mixed triglyceride esters of oleic acid (monounsaturated), linoleic acid (polyunsaturated) and palmitic acid (saturated). Due to unsaturation and higher chain length, the penetration of olive oil inside the hair is limited.

Another study8 investigated the distribution of water in oil-treated hair using small-angle neutron scattering. It found the diffusion-blocking effect was weaker with soybean oil than with coconut oil. This may be due to lower amounts of soybean oil penetrating the fiber, thus blocks fewer pathways for the penetration of water.

More recently, laser scan confocal microscopy was used as a non-invasive technique to investigate the penetration of mineral oil and vegetable oils such as rice bran and refined sesame.10 The results were contested on the grounds of treatment protocol and quantification methodology11 but one key insight reported10 was the role of minor oil components in terms of synergistically increasing or decreasing the penetration of blended oil formulations. More research is required to investigate the effects of minor components in oil to synergistically improve penetration into the hair strand.

Hair strength is often expressed by consumers as a desired attribute. Strong hair is synonymous with healthy, beautiful and vibrant hair, while terms such as weak, fragile and brittle are often linked to hair in poor condition. Hair strength estimation methods and techniques can be broadly classified into two groups: single strand measures and bulk (swatch) measures. The impact of oiling on hair strength has been investigated thoroughly in the literature and is summarized below as per the above classifications.