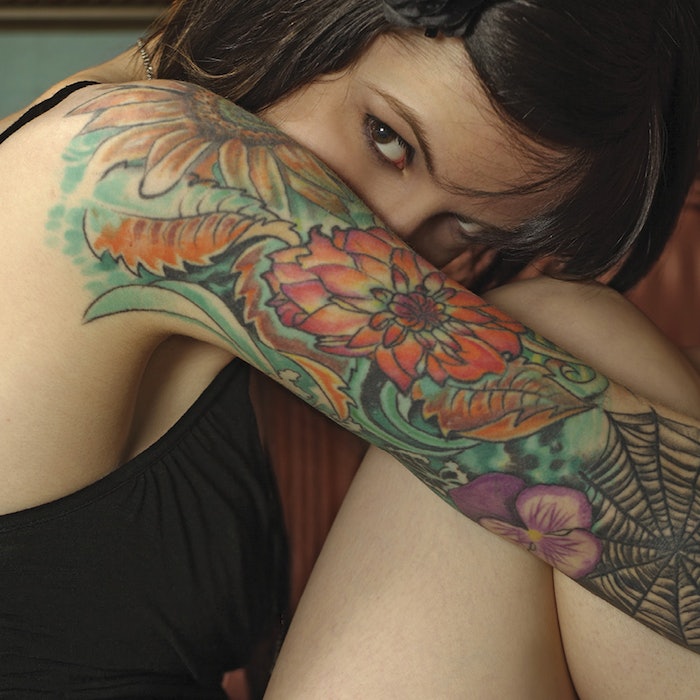 The practice of tattooing has been with us for thousands of years. These permanent markings have served as status symbols, declarations of love, religious beliefs and even identifiers of criminals. According to Joann Fletcher, a researcher in the department of archeology at the University of York in Britain, the earliest known examples of tattoos were found on the famous Iceman, discovered along the Italian-Austrian border and carbon-dated at approximately 5,200 years old.1

Plenty of evidence reveals that the ancient Egyptians, dating back from 4,000 to 35,000 B.C., had tattoos on their bodies. The ink itself was composed of dark or black pigments such as soot, which was introduced into pricked skin. Brighter colors were introduced by other ancient cultures such as the Inuit people, who had tattoos containing a yellow color.1

Tattooing patterns on mummified remains or in early art forms suggest that only early Egyptian women had tattoos and that they were found on their lower abdomen and inner thighs. Speculation suggests them to have been done during labor and delivery to diminish the sensation of pain during the birthing process. Later, tattoos on men were found on faces and along the spine, believed to have been forms of acupuncture in the treatment of dental or spinal pain.1

The more elaborate tattoos of the modern world are thought to have developed over the thousands of years since. After the British expedition to Tahiti in 1769 by James Cook, the islander’s term tatatau—meaning to hit or strike—gave the West the term tattoo. In modern Western culture, tattoos became well-known amongst military service personnel, musicians and sports celebrities.

Today, walking the beaches of North America, we see that tattoos are almost ubiquitous among those under the age of 30. Modern tattoos can be used as a permanent way to place markings upon the body as a means of associating into social, political or religious groups, or simply as a form of self-expression or fashion statement. The sophistication of tattoo artists has reached new heights, with often breathtaking results. According to the U.S. Food and Drug Administration, one in five Americans has a tattoo somewhere on his or her body.2

For those with interest in regulation, it may be puzzling to understand where tattooing fits. Unlike cosmetic pigments, which are applied to the surface of the skin, the pigments in tattoos are injected into the skin. Instead of application with brushes or sponges, the pigments are administered through needles. From a regulatory standpoint, what are the pigments? And what are the needles?

Several forms of tattoos are found in today’s market. Permanent tattoos are probably the first thought, which can also lead to permanent makeup. Both of these use needles to inject ink below the skin’s surface.3 Permanent makeup is essentially a permanent tattoo that mimics the results of cosmetic products; the question is: should we classify these tattoos as cosmetics as well?

Further complicating matters are temporary tattoos. These are not applied with needles and they are not as long-lasting. Are these cosmetics?

Currently in the U.S., the inks and pigments used in tattoos are classified as cosmetics and color additives under FDA regulation.3 The main issue is that due to more important public health authorities, the FDA has not officially regulated tattoo inks or pigments. This is now becoming a priority for regulators because of the increasingly common use of permanent makeup to replace conventional cosmetics, driven by their ease of use and time saved from daily routines.

An increasing number of reports by people who are developing infections from contaminated tattoo ink has prompted the FDA to study its safety. The major concerns seem to be related to infection, allergies, scarring and MRI complications.3

According to Linda Katz, M.D., director of the FDA’s Office of Cosmetics and Colors, in the last several years there have been cases in which people have experienced infections from either tattoo equipment that isn’t properly sterilized or contaminated ink.2 It is very hard to tell if ink is safe, as appearance and odor are not adequate indicators. Ink can become contaminated at any point in the production process, not necessarily at the tattoo studio itself.

The Concern and the Regulator's Role

In 2003 and 2004, the FDA became aware of more than 150 reports of adverse reactions consumers had to certain permanent makeup ink shades. In spring 2012, it received the first report of infections from contaminated inks, which resulted in their recall and market withdrawal.4 Since then, the FDA has been investing more time studying the extent and severity of adverse events that can be associated with tattooing.

According to the FDA, the pigments used in tattoo inks are considered color additives, meaning they are subject to premarket approval under the Federal Food, Drug, and Cosmetic Act. However, the FDA has “not exercised regulatory authority for color additives on the pigments used in tattoo inks,” since the actual practice of tattooing is regulated by local jurisdictions.4

This arrangement could be confusing to consumers and tattoo studios alike; the service is regulated by one level of government and the products used within it by another. This could cause miscommunication and create loopholes in regulation that could be disruptive and costly for the industry and consumers.

Many color additives used within pigments are approved for use in cosmetics; however, none of these pigments are approved for injection into the skin.4 This being said, “cosmetics, including temporary tattoo products, that do not comply with restrictions on color additives, are considered adulterated and are illegal in interstate commerce.”5 The FDA has stated that many pigments that are used in tattoo inks are industrial grade colors suitable for printer ink or automobile paint.3

Another concern relates to temporary tattoos in both the United States and Canada involving “black hennas.” Temporary tattoos such as henna are not approved by the FDA.3 The FDA has issued several alerts for these types of tattoos, such as the color additive regulation 21 CFR 73.2190, which specifically allows for the safe use of henna in coloring the hair only.7 The regulation does not allow for the safe use of henna to make colored designs directly on the skin, including the hands and feet.

Canada has very minimal federal regulation on tattoos and their inks. Health Canada has classified tattoo inks as cosmetics; however, all other products that are administered through ingestion, inhalation or injections are not classified.8 Health Canada has also published consumer updates and alerts in regards to semi-permanent “black henna” tattoos.6

Canada is seeing a great increase in the popularity of these tattoos because they mimic permanent tattoos, but because of their temporary nature are less invasive. When applied, natural henna is a red-brown color and is generally safe to use on the skin. However, black henna is often mixed with the coal tar color p-phenylendiamine, also known as PPD, which is listed as a restricted ingredient on the Canadian Hotlist and is only permitted in hair dyes.

Furthermore, in the fall of 2014, Health Canada received four separate incident reports of adverse reactions that were related to the use of tattoo removal products.10 These reports indicated skin irritation and even scarring. The increase in popularity of tattooing and the lack of long-term risk research on these products is making federal regulatory officials want to better understand their safety.

The information that the FDA and Health Canada has on ink is extremely limited, but both agencies are clearly interested in the composition, contaminants and safety of tattoo inks. The major concern for regulators and the health industry is that people choose to undergo tattooing without being properly informed of the risks involved.

Since 2009, the FDA National Center for Toxicological Research (NCTR) has been investigating tattoo ink.3 Research chemist Paul Howard, Ph.D., is leading the team, which is trying to understand:

No systematic studies have yet been concluded on the safety of tattoo inks. One question being investigated, because of tattoo fading, is what happens to the ink and its pigments when exposed to sunlight and laser light? Many theories for this have been formulated, such as that the body’s cells may digest and destroy the ink, sunlight may break down the ink so it is less visible or even that skin cells that contain the ink are killed by sunlight and laser light. However, none of these theories have been proven with scientific evidence.3

Dr. Andreas Luch of the German Federal Institute for Risk Assessment in Berlin believes that tattoo inks should have their own category in the eyes of regulators.11 Research conducted with his team concluded that due to the fact that tattoo ink is injected into living tissues, it is right to assume that all the ingredients from the ink are readily available to the entire body over time. The skin barrier keeps surface cosmetics out of the body, but once they are injected this is no longer the case and “regulations based on cosmetics are insufficient.”11

The history of tattooing dates back at least 5,000 years, and the art form has become a vastly popular mainstream and sophisticated modern trend. With more than 120 million people in the Western Hemisphere having at least one tattoo, this has now landed on the FDA’s radar. The numbers of case reports to federal regulators do not seem large, but evidently little toxicological information is available.

Further complicating the situation is that the regulation of products and services in this category is complex and involves many levels of government. Hopefully any discoveries made through the FDA’s investigation lead to improved safety and quality for the many consumers who value tattoos as a replacement for makeup, or as an art form or a matter of personal expression.