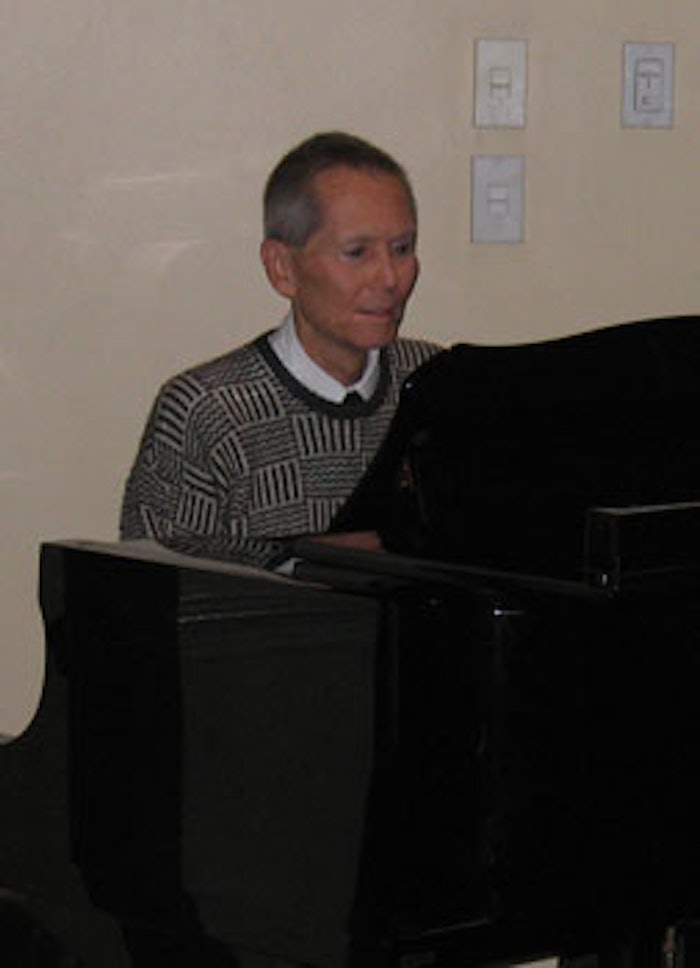 Bud Brewster playing the piano during his presentation at the November 2006 MWSCC dinner meeting.

In 1997, Brewster joined Allured Business Media, publisher of Cosmetics & Toiletries magazine, where he worked until his retirement in 2009. Although he started with the company as an associate editor, he later progressed into a seasoned technical editor, managing the peer review of technical articles and authoring the "Bench & Beyond" column.

In addition to the written word, music and bicycling were Brewster's other passions. A former member of the West Suburban Choral Union, he was also an entertaining pianist and enjoyed playing the cello. He was a classical radio host in Albuquerque, New Mexico, USA, and held supporting roles with symphony management in Santa Barbara, California, USA, and several Midwestern states.

In the 1960s, Bud served his country in the Air Force at Kirtland Air Force Base in Albuquerque, N.M., USA. He was also a longtime member of the Wheaton Kiwanis Club.

Beloved son of the late Margaret and Franklin Brewster, he is survived by his sister Kathleen (William) Hamilton of Montclair, New Jersey, USA; niece Alexandra Hamilton of Little Falls, New Jersey, USA; his lifelong friend Jean Gallup of Wheaton, Illinois, USA; and many people whose lives he touched with words and music.

The visitation will be held on Aug. 1, 2012 from 5–8 PM at the Hultgren Funeral Home in Wheaton, Illinois, USA. Burial will be private. Memorials may be directed to the Kiwanis Club of Wheaton Charitable Foundation.