Gone in a ‘Flash’: Night Sweats Subside with a Novel Astringent Peptide Spray 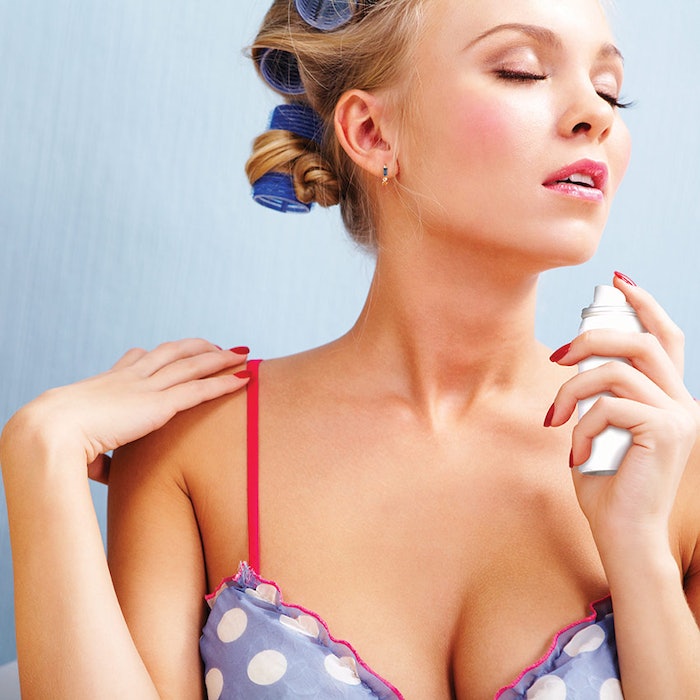 According to the National Institutes of Health, 80% of women will experience hot flashes or flushes (HFs) and night sweats (NS) during menopause.1 The severity of these symptoms can significantly impact their quality of life. For example, NS, the most commonly reported symptom, causes a loss of sleep and embarrassment.2 Despite these symptoms, only 25% of women experiencing them seek medical treatment.2

When treatment is sought, the most effective and widely used treatment is hormone replacement therapy. Although it successfully addresses these symptoms, the association of hormone therapies with various forms of cancer and other health effects have limited their application.3 Furthermore, traditional antiperspirants are not an allowed option for these consumers within the United States, due to regulatory restrictions on the use of antiperspirant actives.

Research by Courtois et al. in a clinical setting has demonstrated the use of certain peptide compounds to reduce perspiration.4 Here, the research presented expands on this work to include additional peptides. Also, results demonstrating the inclusion of salt-based cosmetic astringents is shared. These salts provide an astringent or pore-tightening effect, which for many types of cosmetics provides an esthetic benefit and lends credence to the product’s efficacy, while providing a short-term drying effect. The inclusion of these ionic astringents is significant in that it provides an immediate, perceptible change in how the skin feels, encouraging product use for a long enough period to ensure the active can achieve its intended effect.

However, as one might suspect, this presents formulation challenges since it is well-known that compounds with high ionic strength can cause protein and peptide aggregation and conformational changes—ultimately leading to a loss in cosmetic function.5-7 Thus, for the project at hand, cosmetic formulations including peptides that demonstrate activity in the presence of salt-based cosmetic astringents were needed. This would provide consumers with both an immediate, sensory benefit and drying effect to promote product use long enough to ensure the desired physiological effects are achieved. The present article describes steps taken to achieve this optimal formula.

Ingredients and emulsion preparation: The formulation process avoided the use of ingredients listed in traditional antiperspirant monographs. As such, research focused on cosmetic astringents listed within the Personal Care Products Council database, particularly those that were aluminum-based, and peptides reported to have botulinum toxina-like activity for reducing wrinkles and fine lines. For each peptide, the maximum recommended use level from the manufacturer was utilized.

Initially, the base formulation described in WO 2010003828A2 was utilized (see Table 1), which consisted of 4.0% sunflower oil, 2.6% steareth-2 and 0.6% steareth-21 as a vehicle to ensure the compatibility of salt-based astringents and peptide formulations; this also served as the control material for the clinical study.4

Both rheology modifiers and peptides were screened for physical compatibility with the water-soluble salt based astringents within simple water solutions. In later formulations, glyceryl stearate was added to improve emulsion stability. The overall goal was to maintain low viscosity yet high stability so as to allow the emulsion to be sprayed with sufficient quality. Table 2 provides the peptide formulations tested and indicates the base composition used from Table 1. In all instances, water was removed on a 1:1 basis to include the ingredient listed. These cosmetic formulations were prepared in a manner consistent with standard emulsion techniques.

Once formulations were developed, two investigational studies were conducted to determine the effect on sweat production of cosmetic peptides and astringents in formulations. The clinical tests described were conducted by external partiesb, c.

The tests were performed on eight sites of the lower back. Formulations were applied for four days. Testing was conducted in a hot room using gravimetric measurements. Sweat was collected at baseline and Day 4 for comparison. The screenings of various potential sweat-reducing materials were carried out in a minimum of 20 human volunteers, with baseline screenings performed on up to 40 subjects. Qualifying participants produced a minimum of 50 mg of sweat over a 20-min collection period in a room maintained at 100°F ± 2°F and 35% ± 5% humidity.

The first study assessed various peptides to determine which, if any, would be effective at reducing sweat compared with untreated controls and the same vehicle with 6.25% aluminum chloride. Figure 1 shows the antiperspirant results for the formulas in Table 2 containing base composition 1 (from Table 1).

Compared with the untreated control site (U), the extent of perspiration reduction for six of the seven test formulations was significantly greater (p < 0.05). Of the six formulations, those containing palmitoyl hexapeptide-19 and the combination of acetyl hexapeptide-30 (and) pentapeptide-18 were the most effective at reducing perspiration; by approximately 28% and 27%, respectively.

Acetyl hexapeptide-30 and dipeptide diaminobutyroyl benzylamide diacetate, which were the least effective materials, each reduced perspiration by approximately 18%. Acetyl hexapeptide-30 was the only peptide that did not significantly reduce sweat production, compared with the untreated control (p = 0.0826).

Comparative formulations with peptides—i.e., I, J and M—showed significantly different results than the base. Among formulations utilizing base formula 3, those containing acetyl dipeptide-1 cetyl ester and the combination of acetyl hexapeptide-30 (and) pentapeptide-18 outperformed palmitoyl hexapeptide-19 in mean and median perspiration reduction, with the latter failing to achieve a significant difference over untreated sites. The inclusion of acetyl dipeptide-1 cetyl ester with base formula 4 led to a significant reduction in the level of perspiration. All three peptide-containing formulas demonstrated equivalence to the 6.25% aluminum chlorohydrate formulation.

Relative to study one, the overall magnitude of the 6.25% aluminum chlorohydrate formulation (base formula 1) was equivalent in the mean reduction of perspiration; 44.1% and 48.0%, respectively. However, the untreated sites in the second study showed reduced perspiration values at the conclusion of the study (-22.6%), whereas increases in perspiration (11.48%) were observed in the first study. The overall level of variance observed was comparable between the two studies.

Additionally, the combination of microcrystalline cellulose (and) cellulose gum, as well as glyceryl stearate, replaced the more salt-sensitive xanthan gum to ensure stability while maintaining a low enough viscosity for spray product applications.9 Stability testing demonstrated the maximum aluminum levels compatible with the base formulation; these are expressed in base formulas 3 and 4.

Formulations containing peptides demonstrated superior efficacy to aluminum-based astringents. Despite the lack of efficacy, the astringents selected also provided a noticeable tightening effect to skin, while imparting a dry, powdery feel—particularly ammonium alum. Clinical results demonstrated it was possible to include aluminum-based salts for astringency without adversely impacting the performance of appropriate selected peptides. Among the peptides studied, this included acetyl dipeptide-1 cetyl ester and the combination of acetyl hexapeptide-30 (and) pentapeptide-18. In these formulations, the aluminum-based salts appear to have increased the activity of the peptide, as each achieved the statistical equivalence of the 6.25% aluminum chlorohydrate formulation, whereas the comparable formulation with only the peptide failed to do so.

However, palmitoyl hexapeptide-19 demonstrated significant lower efficacy relative to the untreated test sites when combined with moderate concentrations of aluminum-based astringents. One possible explanation for this apparent loss in efficacy is that the palmitoyl hexapeptide-19 contains aspartic acid as one of its amino acids. Ionic interactions between the aluminum salts of the vehicle and the hydroxyl groups of aspartic acid under acidic conditions may have led conformational changes in the peptide, which lowered its overall efficacy.

Although the acetyl hexapeptide-30 also contains aspartic as well as glutamic acid, the efficacy observed with the combination of acetyl hexapeptide-30 (and) pentapeptide-18 was likely more attributed to the combination of or pentapeptide-18 alone, as the former failed to provide significant levels of perspiration reduction within the first study. Further clinical testing of peptides containing either or both amino acids is warranted.

Although in the described studies statistical differences were observed relative to untreated sites, the level of variability remained higher than anticipated. This was despite the relatively high-dose formulation applied; preventative measures taken for site contamination, e.g., by sweat rolling down the back; and the comparable area of the test site relative to the armpit.

One possible explanation for these differences is that relative to traditional antiperspirant products, the experimental lotions studied have significantly lower solids content, leading to a less uniform film of actives remaining following the evaporation of water. This, combined with the fact that sweat gland concentration and activity varies considerably, particularly when comparing the armpit to the back, may lead to greater variability among and even within the same subject.10, 11

Table 1. Base Formulas for Clinical Evaluations

Peptide formulations tested with base compositions used from Table 1