Bruise Amelioration and Skin Benefits from Glycerin and Triglyceride

To ameliorate the appearance of bruises, the formulation of a specified glycerin and triglyceride preparation is described here. It functions both as a humectant and occlusive agent, attracting water to the skin and returning the skin surface to a smooth state while holding water in place. The re-establishment of a homeostatic state in skin results in a rapid dissipation of the bruise and related negative cosmetic effects. In addition to ameliorating bruises, such a preparation could support other cosmetic and pharmaceutical applications.

A bruise is a condition caused by distress to the tissue that breaks capillaries under the skin, allowing blood to escape and build up. As time progresses, blood seeps into the surrounding tissues, causing the bruise to darken and spread. The damaged capillary endothelium releases endothelin, a hormone that causes narrowing of the blood vessel to minimize bleeding. As the endothelium is destroyed, the underlying blood glycoprotein known as von Willebrand factor is exposed and initiates coagulation, which creates a temporary clot to plug the wound, eventually restoring the tissue.

As the tissue recovers, larger bruises change color due to the breakdown of hemoglobin from the escaped red blood cells in the extracellular space. The striking colors of a bruise are caused by the phagocytosis and sequential degradation of hemoglobin to biliverdin, then to bilirubin and finally to hemosiderin. Hemoglobin itself produces a red-blue color, biliverdin produces a green color, bilirubin produces a yellow color, and hemosiderin produces a golden-brown color. As these products are cleared from the area in the normal healing process of the body, the bruise disappears. Often the underlying tissue damage has been repaired long before this process is complete.1

Since the color produced by bruising is unappealing, consumers want to minimize it. Concealers provide one approach, although they do not correct the problem. Adding color to the skin also risks a negative consumer response if the product provides uneven color or irritates the skin.

Another approach is to reduce the bruise itself. The best topical product candidates re-establish skin's homeostasis to the state it was before the bruise-causing incident occurred. Specifically, the skin's natural state of water balance must be restored, as this will more rapidly dilute the hemoglobin breakdown products described, resulting in amelioriation of the bruise appearance. Note that for the purposes of this paper, references to skin encompass the epidermis, dermis and proximal tissues below the skin where a bruise may appear.

There are two main approaches to return skin to its normal state of hydration: humectants, which are water-soluble materials that attract water from the air to moisturize skin; and topical occlusives, i.e., water-insoluble materials that work by forming a thin film on the surface of the skin to prevent the loss of moisture. Perhaps the most well-known topical occlusive is petroleum jelly.

The humectant discussed here is glycerin. This hygroscopic material maintains moisture and may be associated with hydration, wound healing and epidermis homeostasis via its role in expressing aquaporin-3 (AQP3), a water/glycerol-transporting protein.2-6 For occlusives, one important class described here is triglycerides. A triglyceride is an ester derived from glycerol and three fatty acids. It is the main constituent of vegetable oil and animal fats. As one applies occlusives to the skin, the skin becomes softer and more pliable. This reduces evaporation. These water-insoluble materials also inhibit transepidermal water loss.

Kelly Dobos, of Kao Brands, explained the difference between humectants, occlusive agents and emollients for the benefit of novice formulators as follows.7

“Humectants: Humectants include ingredients such as glycerin, urea and pyrrolidone carboxylic acid (PCA). These materials function by attracting water outward to the stratum corneum (SC) from the dermis below, and binding that water in the SC. Glycerin, for instance, frequently is used due to its low cost and high efficacy. However, the tacky feeling imparted to skin by high levels of humectants is one of the drawbacks to formulating with them. Thus, when optimizing skin formulations, cosmetic chemists often are challenged to reduce these negative properties.

"Emollients:  Emollients provide some occlusivity and improve the appearance of the skin by smoothing flaky skin cells. Many different types of emollient esters and oils are available to formulators.8, 9 Emollients generally are grouped by their ability to spread on the skin. By combining emollients with the different spread rates, formulators can tailor the skin feel of a moisturizer. One can test for these differences by using different emollients in a standard base lotion. Additionally, emollient lipids similar to those naturally found in the skin may increase the rate of barrier repair."10

A problem with humectants and occlusives for the treatment of bruises is that they have heretofore been mutually exclusive. If only a humectant is used to attract water to the skin, it can too easily be removed from the skin by water. Similarly, occlusive materials alone block the hydrating properties required to ameliorate the appearance of bruises. To further thwart the search for a truly multifunctional approach, oil and water do not readily mix. This lack of solubility makes the possibility of formulating a truly multi-faceted formulation to reduce the appearance of bruises highly challenging.

The ability to formulate products having several mechanisms to improve the appearance of bruises has been the topic of several recent patents.11-13 These describe a formulation based on carefully selected levels of glycerin and triglycerides to produce a serum or gel that, when applied to skin, provides an occlusive barrier while simultaneously facilitating the absorption of humectant ingredients.

To produce a thick and stable structured gel, the triglyceride chosen must have specific levels of unsaturation to ensure its stable dispersion; in relation, the iodine value (IV) can be used to measure the unsaturation present in a particular chemical. The higher the IV, the greater the number of double bonds present. The preferred method for determining the IV is the Wijs procedure.14 This is generally expressed in terms of "the number of grams of iodine that will react with the double bonds in 100 grams of fats or oils."

Thus, oils with a high iodine value contain more double bonds than low-IV oils. Also, edible oils with high IVs are usually less stable and more susceptible to oxidation. Natural oils chemically are triglycerides; a triglyceride is an ester derived from glycerol and three fatty acids conforming to the structure shown in Figure 1. The triglycerides used in the described patents included natural products chosen from those listed in Table 1.

The ideal dispersion of glycerin and triglyceride was found to incorporate levels of glycerin between 80% and 99% w/w, and triglycerides between 1% and 20% w/w. Also, the chosen triglycerides were more than 50% by weight C18 and had an IV of between 100 and 160 mg KOH/g. This combination provided a stable dispersion of tryglyceride while also imparting humectant properties and minimizing TEWL—both of which aid in returning skin homeostasis, in turn ameliorating the appearance of the bruise.

Note that the formulation could additionally include ingredients such as vitamins, retinol, flavonoids, antioxidants, anti-acne actives and alpha and/or beta hydroxy acids, added either at a monograph level or 1-5% w/w. However, most critical to ameliorating bruises is this combination of glycerin concentration relative to the triglyceride, and the amount of unsaturation of the triglyceride as measured by IV.

To evaluate the stability of the specified glycerin/triglyceride formulation (Formula 1), the specified number of grams of evening primrose oil (Oenothera biennis) was added to glycerin under good agitation over a range of concentrations; evening primrose oil was selected for its 152 IV. The blend was mixed for 30 min, whereupon it was passed through a homogenizer. After 30 min at room temperature, the product was visually evaluated for separation into its oil and water phases (see Figure 2).

Despite the fact that the formulation was predominantly glycerin and water-soluble, the formulations rendered a glass substrate hydrophobic. This indicated a means of keeping hydrophilic humectants such as glycerin on the skin in a hydrophobic formulation, and thus provide moisturization by both humectant and occlusive mechanisms.

The same evaluations of Formula 1 were carried out with human forearms as the test substrate. A 0.5-mL sample of the formulation was applied to the forearm and rubbed into an area the size of a quarter. After 5 min, a drop of water was applied. Results were similar to those found in the MSDP evaluation (see Table 5).

To compare these results with less-than-optimized formulas (see Formula 2 and Formula 3), the specified number of grams of the same evening primrose oil (Oenothera biennis) was added to glycerin under agitation but at a concentration greater than the specified 20%, under the same agitation and homogenization procedures. This product separated into two layers (see Figure 3).

Next, a triglyceride with an IV below the specified 100-160 KOH/gm units was used in the formulation at the specified number of grams (1% to 20%, by weight), and similarly, the product separated into two layers (not shown). Alternate blends such as those in Formulas 2 and 3 are therefore undesirable for the intended purpose of ameliorating the appearance of bruises.

This paper describes the development of an 80% glycerin and 20% triglyceride formula that imparts an occlusive film to skin (minimizing TEWL), and acts as a humectant to attract and retain water. This formulation provides an established mechanism for ameliorating the appearance of bruises and the potential mechanism for a wide variety of additional cosmetic and pharmaceutical applications.

Triglycerides useful in the preparation of the described formulations are natural and may include any of the above. 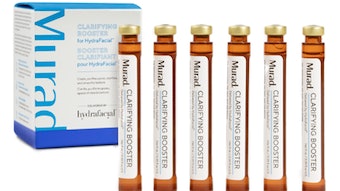 The Murad Clarifying Booster is formulated to address breakouts and problematic skin as part of a customized HydraFacial experience.
Jun 22nd, 2022