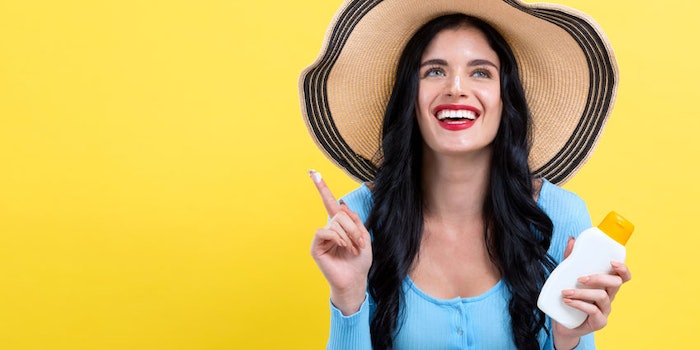 Regulatory bodies require quantifiable, photostable UVA protection for sunscreens,1, 2 and zinc oxide (ZnO) provides such protection, as well as a long history of safety in sunscreens and cosmetic applications.3 Groups such as the U.S. Food and Drug Administration (FDA) and the Therapeutic Goods Association (TGA) also have approved ZnO for use as a UV active ingredient in OTC sunscreens. Furthermore, ZnO has Generally Recognized as Safe (GRAS) status, is the only ingredient recognized by the FDA as providing both UVA and UVB protection, and is defined by the FDA as a Category I skin protectant, inferring that it can be used safely on compromised or environmentally challenged skin.

However, a drawback to formulating with ZnO is its white appearance on skin, which creates low cosmetic acceptability and marketability. This whiteness is caused by the back-scattering of light from submicron sized ZnO particles in sunscreen formulas. By reducing the ZnO particles to nanometer size (< 100 nm), product developers have successfully decreased this scattering and developed transparent formulations but such formulas are limited to approximately 5% w/w ZnO content.

Transparency is critical in beach and daily wear products but it holds even greater importance in liquid foundations. Increasingly, formulators are combining ZnO and titanium dioxide (TiO2) in makeup foundations to impart added UV protection, thus supporting sun care claims. However, darker colored foundations with sun protection benefits are difficult to achieve due to the skin whitening caused by conventional inorganic filters. Considering these needs, in the present article, the authors describe a micron-sized ZnO dispersion to enable transparent formulations using higher levels of ZnO for effective sun protection, as shown by transmission spectroscopy and SPF testing.

Contrary to popular belief, data has shown that nano-sized ZnO particles (< 100 nm) are not required in order to develop transparent sunscreen formulations. Controlling the scale of the particle structure and combining the particle with excipients modifies the refractive index of the particles by reducing it to a value closer to that of the excipients, thus minimizing the scattering of visible light. This structure results in index-matched, micron-sized ZnO dispersions that are transparent on the skin.

To demonstrate this, three sample ZnO dispersions were evaluated via transmission spectroscopy: a control sample prepared using pigment grade ZnO, a test sample including nano-sized ZnOa, and another sample incorporating micron-sized ZnOb manufactured to form porous particles of controlled structure and density (see Figure 1). For this test, a greater transmission of visible light is interpreted as a decreased whitening effect on skin (see Figure 2).

The pigment grade ZnO interacted with the visible light as expected. The nano-sized ZnO performed somewhat better than the pigment grade ZnO, although it transmitted nearly 50% of 550 nm light. The micron-sized dispersion achieved the highest transmission at > 90% at 700 nm, which is due to its porous design. Figure 3 illustrates a typical particle size distribution of micron-sized ZnO based on measurements completed at three different laboratories.

To further demonstrate transparency, a test formula was prepared twice; one version (Formula 1a) contained a nano-sized ZnO powder while another (Formula 1b) included the micron-sized ZnO dispersion. These formulations were compared via a film test using ZnO as the only active. Equivalent amounts of each sample formula were deposited on a dark background and a draw-down bar was used to make a thin film. After the films dried, the transparency of each was examined. The formulation containing the micron-sized ZnO showed no whitening on the dark substrate, whereas the equivalent nano-sized ZnO formulation showed a white streak (see Figure 4).

As previously described, ZnO is considered a full-spectrum UV absorber since it covers the complete UVB range and majority of UVA wavelengths. It exhibits nearly equal absorbance from 290–360 nm and begins to slowly decline through 400 nm. One study has indicated that the total absorbance (attenuation) across the UV spectrum is affected by the particle size of the zinc oxide;4 another report5 lists the λmax for ZnO as 280–390 nm, indicating that the attenuation is somewhat level over that wavelength range.

Mineral sunscreens have been formulated using 30–40% w/w micron-sized ZnO dispersions (15–20% ZnO) to develop formulations with an SPF of 20–30+ (see Formula 4, Formula 5 and Formula 6) and at this loading, the formulas were not found to cause skin whitening (data not shown). The formulations shown utilize the dispersion of ZnO in capric/caprylic triglyceride, which is Ecocert approved.

Sunscreens also have been formulated with high SPF levels using lower amounts of the micron-sized ZnO dispersions with other UV absorbers; generally, 2% w/w of these dispersions (1% ZnO) result in approximately 1.5 SPF units, although some formulas result in up to 2 SPF units (data not shown). While micron-sized ZnO dispersions have not yet been tested for UVA balance, they typically have UVA/UVB ratios of 0.7–0.8 and critical wavelength measurements of 370 nm and 375 nm, which indicate broad-spectrum protection.

pH and stability: Solution pH is one of the more important considerations when formulating with ZnO since the pH of the environment will affect the level of zinc ions in the formulation. Zinc ions from ZnO become slightly soluble when the pH is below 7.5, with a dramatic increase in zinc ion solubility when the pH drops below 7.0. This can cause instability in sunscreen formulations since zinc ions may react with other ingredients in the formulation such as rheology modifiers or other negatively charged species. For example, most carbomers will react with zinc ions, forming complexes that decrease the thickening and stabilizing ability of the carbomer. Formulating with ZnO at a pH < 7 should therefore be avoided.

Chelating agents also can help to minimize the level of soluble zinc ions. Since the pH may rise during formula preparation, buffering is performed to lower it. Citric or other organic acids may also be used to lower pH levels; the addition of these acids can help to stabilize the emulsion, however, care must be taken so as not to reduce the pH below approximately 7.5.

Emulsifier systems: W/O emulsion systems frequently provide a higher SPF than traditional o/w emulsion systems because they form a more consistent film on the skin, especially when the oil phase contains the ZnO particles. And while nonionic and cationic surfactants are compatible with ZnO, some anionic emulsifiers may interact with zinc ions and cause instability. For w/o formulations, nonionic surfactants such as PEG-30 dipolyhydroxystearate, polyglyceryl-2 dipolyhydroxystearate and disiostearoyl polyglyceryl-3 dimer dilinoleate are recommended to create high concentration mineral-only sunscreens.

Other ingredients: Products incorporated into oil phases such as waxes, oils, film formers, silicones and other UV-absorbing agents should be mixed well to ensure homogeneity prior to emulsification to provide a more transparent film and maximum SPF. Silicones may also assist in forming a transparent film.

The authors have demonstrated the viability of creating stable, visibly transparent and effective sunscreen formulations comprising micron-sized ZnO particles that are homogeneously dispersed in a hydrophobic emollient. These dispersions enable the formulation of mineral-based sunscreens without organic UV absorbers but still provide full spectrum UV protection and high transparency on human skin.