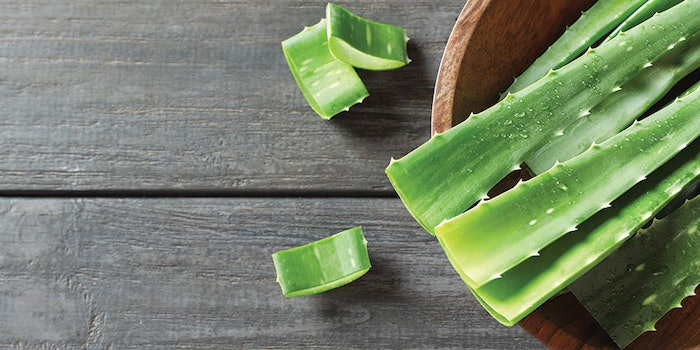 To read this article in its entirety, click through to your April 2020 digital magazine. . .

As the use of botanicals in beauty continues to increase, this article delves deeply into what is probably the most famous and ubiquitous botanical—Aloe vera, often called the “wonder” plant due to its multiple claimed benefits. Despite its long history of use, there is still debate about its composition and how this links to measured benefits. Without doubt, it is a fascinating plant and its utility in beauty only looks to be growing.

As such, the present article reviews its known benefits and how they are linked to the plant’s growth, cultivation and harvest. It also explores how sources of Aloe vera can vary in their chemistry, and what to consider when formulating this ingredient in different products.

Officially Aloe vera (L.) Burm. f. but commonly referred to as Aloe barbadensis Miller, the plant is part of the genus Aloe, which contains more than 500 different aloe species. It also belongs to the family Asphodelaceae, which is related to the Liliaceae family that includes garlic, onion and asparagus. Recent genetic research of the plant has shown it originates from the Arabian Peninsula1 but is grown commercially in many countries including India, South Africa, the United States, Mexico, Venezuela and Haiti.

Aloe is a succulent with the ability to store water in its leaves and thus is capable of growing well in arid and semi-tropical countries. Even though it is a succulent, the plant is not a cactus and ideally it needs > 100 cm of water each year to grow. This availability of water has a significant impact on the final extract’s quality.

The plant grows to a height of 60-100 cm in its mature state, which occurs after 4-6 years, and it can survive longer than 15 years. The leaves can be harvested every 6-8 weeks by removing 3-4 leaves from each plant. The active components are found in the leaves, which house three major structural components: the clear inner gel, called mucilage tissue or pulp, which is a soft slippery tissue composed of ~98% water; the middle latex, a bitter yellow sap; and the outer thick cuticle or rind of the leaf.

The plant’s name, aloe, means “shining bitter substance” in Arabic, and vera means “true” in Latin. This underlines the importance of aloe leaves for traditional medicinal and cosmetic use, which has been known for centuries. Well-known and documented in the 16th century BC, aloe is mentioned in the Egyptian Ebers Papyrus medical record. It is also described in the works of Dioscorides, who was an Ancient Greek botanist and physicist living in Imperial Rome under Emperor Nero.

In the first century AD, Nero produced a book, the Codex Aniciae Juliane, on medicinal herbs with illustrations of more than 600 plants believed to have healing properties. In the illustration of Aloe vera, Nero recommended using the plant to aid and possibly heal skin ailments and hemorrhoids. It was also well-known to the ancient Egyptians as the “plant of mortality” and used by notorious queens such as Nefertiti and Cleopatra as part of their beauty regimens. In old texts from Arabia and the Orient, aloe, referred to as Ghrit Kumari, is an ingredient in many recipes for digestive health.

Until the 17th century, the only official aloe was grown on the island of Socotra in the Indian Ocean, but as its popularity grew, so did its reach. As it became a cost-effective crop, new habitats were identified and from this, the variety of product types including gels, powders, etc., grew.

Today, the world demand for aloe is more than 100 million liters and the world market is worth more than US $600 million. This demand is steadily growing, with a predicted compound annual growth rate of 7.6% between 2019 and 2024.2 Aloe is the only species not covered by the Convention on International Trade in Endangered Species (CITES) of Wild Flora and Fauna, which places restrictions on the trade of endangered plants. The issue with aloe is the pressure of taking land from other activities, such as food production, to meet the increasing global demands. It is predicted there will be increasing pressure to ensure good agronomy and harvesting practices to maintain the extract’s quality.

Part of the popularity of aloe is its wide and varied range of claimed benefits, including anti-inflammation, laxative, anti-viral, anti-tumor, antibacterial and antifungal benefits. Detailed clinical studies are limited but research is available that entails these benefits, as well as studies attempting to link its activity to specific responsible components in aloe. From these studies, more than 200 biologically active compounds in the aloe leaf have been identified; this is perhaps the secret to its wide-ranging efficacy and long history.

Such findings have spawned a huge number of different aloe products including pills, sprays, ointments, lotions, liquids, drinks and creams in major industries such as food and beverages, pharmaceutical and cosmetics. In fact, nearly 40% of the global aloe market is in the cosmetics space. Skin care products make up the highest percentage of this, ~60%, whereas hair and soap/bath products each make up ~20%. These products are either formulations with added aloe or aloe gel itself, which is often used for moisturization or hydration in both skin and hair.

Extensive research has been carried out to identify the diversity of components in Aloe vera; Table 1 details several, along with their properties.3 As mentioned, the gel is ~98% water but of the dry solids, 53% are polysaccharides, 17% sugars, 16% minerals, 7% proteins and 5% lipids. The most important constituents of aloe gel are polysaccharides as these are known to have anti-microbial, anti-viral and antioxidant properties.

One specific polysaccharide of interest is acemannan, which is a β-(1,4)-acetylated soluble polymannose found mostly primarily in the gel (see Figure 1).4 Its concentration in the plant is closely linked to planting conditions, and particularly to water and light levels. Acemannan itself has been reported to have many pharmacological and biological applications in medical and industrial fields, such as for oral diseases, cardiovascular diseases and tumor diseases. It has been shown to promote the formation and of dentin in teeth,5 and to promote the mineralization of human dental pulp.6 In addition, the data suggests a role in healing mouth ulcers,7 and in vitro testing shows a role in skin wound healing.8

Many studies show structural characteristics of plant polysaccharides such as molecular weight, chemical composition, branching structure and conformation affect biological activity but there are only limited studies on acemannan. For example, it has been shown that acetyl groups are important to the conformation and physical/biological properties of the polysaccharide. It is also known that agronomy and processing conditions can impact this via deacetylation but a detailed structure-activity relationship has not been fully elucidated.

The most important actives in the latex and rind are the anthraquinones, including aloin (see Figure 2). These actives are documented as laxatives and can act as analgesics, anti-bacterial agents and anti-virals. Aloin was banned by the U.S. Food and Drug Administration (FDA) in 2002, however, since it may cause abdominal spasms and pain with long-term use, and excessive dosing can lead to hepatitis. The EU allows aloin with a maximum use level in food and beverages of at 0.1 mg/kg except for alcoholic beverages, where the limit is 50 mg/kg. Aloin is now mainly removed from aloe extracts, especially for dermatologic and cosmetic uses, as are other anthraquinones such as emodin.

In some cases, ingredients responsible for aloe’s activity have been identified as the polysaccharides, aloin, etc., but in other cases there is evidence of more complex interactions among components. Studies that research these complex synergies are very limited. Since aloe compositions can vary considerably, according to agronomy and processing, this makes scientific work more difficult; the result can differ vastly due to the proportions of specific actives in the extract.

There also are many reports of aloe’s efficacy but the number of well-controlled clinical studies is limited. In 1999, a review of the literature was performed to identify and review these studies.9 Only 10 were performed using Aloe vera mono-preparations. Two trials studied wound healing with Aloe vera and both trials exemplified a clear result. The first as a half-face clinical on patients that had undergone dermal abrasion of the face due to Acne vulgaris.10 Here, wounds saturated with aloe were found to heal 72 hours faster than control sites. A second trial examined the rate of wound healing for in 40 women after gynecologic surgery. Healing required an average 83 days in the control versus 53 days for wounds treated with aloe.11
Another trial for the treatment of psoriasis studied 60 men and women in a double-blind, placebo-controlled manner.12 The number of patients “cured,” as defined by the index of skin lesions, was 83% for those treated with aloe vs just 7% for the control. Positive results also have been observed in studies of patients with hyperlipidemia and a negative response to diet,13 and patients with a first genital herpes episode.14 However, no benefit was observed in studies assessing the prevention of radiation-induced skin injury in women with breast cancer,15 or in studies of patients with diabetes mellitus.16

In relation to cosmetics and personal care, hair and skin studies are limited. There is evidence that aloe gel can act as a humectant, likely driven by the polysaccharide content, and an emollient to soften and smooth skin and improve skin barrier function.