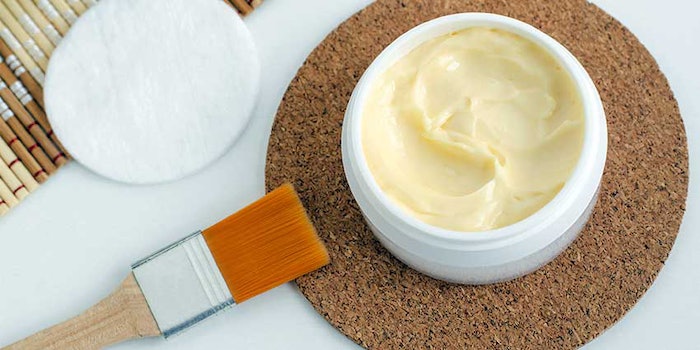 The shea tree, also known as Butyrospermum parkii or Vitellaria paradoxa, is primarily found in the semi-arid savannah belt, extending across sub-Saharan Africa and ranging from Mali to Sudan and Uganda.1 The shea tree is most valued for its “butter” extracted from the fruit kernels, which commonly is used as a skin care emollient, but also as a replacement or addition to cocoa butter in the food industry.

Shea butter, also known as Karité butter, is highly appreciated in the cosmetics industry for its sensory and skin care properties. Its high unsaponifiable lipid content makes it a valuable source of bioactive triterpene esters, offering a naturally derived and functional ingredient for cosmetic formulations. The present article profiles this ingredient and reviews research in the literature on its various benefits. Further, it describes studies conducted to assess the effects of shea butter triterpene esters on several skin properties.

Much like other vegetable oils and fats, the main constituents of shea butter are triglycerides—esters of glycerol and fatty acids, showing an approximately equal mix of solid and liquid triglyceride fractions based on oleic and stearic acids.2, 3 Shea butter also contains especially high levels of non-glyceride components summarized by the collective term unsaponifiables or unsaponifiable matter. A typical vegetable oil contains less than 1% of unsaponifiables, mainly phytosterols and tocopherols, whereas shea butter can contain as much as 7% to 10% of unsaponifiables comprising triterpene esters as well as highly unsaturated isoprenoidal hydrocarbons.3, 4

The tocopherol content in shea butter vs. vegetable oil is comparatively low; often ~100 ppm, corresponding to a low level of sensitive polyunsaturated fatty acids in the butter. On the other hand, the main shea butter fatty acids, oleic and stearic, are sufficiently stable against oxidation. Thus, if carefully purified and correctly handled, shea butter and its extracts show superior oxidative stability and do not require additional antioxidants.

Triterpenes originate from squalene, and the biosynthesis of these pentacyclic hydrocarbon structures consisting of six isoprene units is considered one of the most complex reactions occurring in nature. Even though triterpenes are among the most common plant secondary metabolites, their function in plants is not yet fully understood. They usually are concentrated as alcohols in the plant’s outermost layers such as the cuticle, fruit peel and bark. They also are found at lower concentrations in plant oils.

The dominating triterpenes in shea butter are lupeol, α- and β-amyrin and butyrospermol, which belong to the lupane, oleanane and ursane triterpene families, respectively (see Figure 1). These triterpenes occur as acetyl and cinnamoyl esters and are of interest as active ingredients in cosmetic formulations.

Triterpenes with varying structures are found widely in edible fruits and vegetables, including Butyrospermum parkii. These naturally occurring alcohols and their derivatives are reported to exhibit anti-inflammatory and anti-tumor activity.5-8 Extensive research over the last three decades has revealed several important pharmacological activities of lupeol.9 Besides its anti-inflammatory7, 10 action, in vitro and preclinical animal studies suggest lupeol could act as an:

Various in vitro and in vivo models also have tested lupeol for its therapeutic effectiveness for:

Human skin, being the body’s outermost shield against various environmental conditions, responds to a number of stress conditions by a series of inflammatory reactions that aim to repair tissue and regain homeostasis.

Inflammation can be induced by injurious agents, chemical irritants, toxins, pathogens, burns, UV exposure and so forth. This condition often is caused by the formation of ROS, followed by the biosynthesis of inflammatory mediators such as the leukotrienes and prostaglandins.25 UV-induced ROS are shown to prematurely influence aging processes; one study by Surowiak et al.26 illustrates a higher expression of cyclooxygenase 2 (COX-2) in skin samples affected by photoaging.

Consequently, protection against premature aging, as well as treatment for sensitive and aged skin is a high priority for personal care product development. In relation, natural triterpenes are well-researched for their bioactivity and show potential not only within the pharmaceutical industry, as previously described, but also as potential new and valuable skin care ingredients.

Lupeol esters such as acetates, palmitates and linoleates also were demonstrated to have potent protease-inhibiting activity.27-29 Moreover, esters of lupeol and other triterpenes have shown potential for reducing arthritic joint destruction in rheumatoid arthritis via direct pharmacological action.23, 27 A selective inhibiting activity of both metallo- and serineproteases by lupeol esters also has been described by Hodges et al.27

The anti-inflammatory and protease-inhibiting activity of triterpene esters reported by several research teams indicate potential for reducing skin stress induced by environmental factors.29 Such effects suggest the use of triterpene esters in skin care formulations, to protect against stress-related effects. In consideration, the studies described here assessed the various effects of shea butter triterpene esters on skin inflammation, barrier thickness and collagen production.

Anti-inflammatory activity: The 100-500 ppm triterpene ester shea butter ingredienta was tested at concentrations of 0.5-2.5 mg/mL by applying it to normal human epidermal keratinocytes maintained in complete growth medium. Effects on the pro-inflammatory mediator IL-1α cytokine in keratinocytes were evaluated after exposure to croton oil as a chemical irritant.31

Barrier thickness: To assess barrier-strengthening properties, a simple polymer-stabilized test cream containing 5% caprylic/capric triglycerides and the 3,000-ppm shea butter triterpene ester ingredientb (0.5%), and a placebo cream were applied for five days to living human skin explants obtained from the abdominoplasty of a 45-year-old woman. Barrier thickness was evaluated on day six by general morphology, after staining with Masson’s trichrome and using a microscopec at 25× magnification.

Collagen activity: The effects of shea butter triterpene esters on collagen in the papillary dermis was investigated in a similar manner, applying the same test and placebo creams to explants grown under normal growth conditions. Collagen content also was evaluated microscopicallyd at 20× magnification, after collagen staining with Picro Sirius according to SOP H-164.

Matrix metalloproteinases (MMPs): The deactivation of MMPs is required for collagen production, thus a gene expression analysis (RT-qPCR method) was initiated. MMP-3 is known to be up-regulated in aged skin after UV-exposure and is responsible for the breakdown of the skin collagen type III.

The effects of the shea butter triterpene ester ingredientb on MMPs were therefore evaluated at 0.05% and 0.1% in normal human epidermal keratinocytes (NHEK), grown in Keratinocyte-SFM Culture Medium. This medium was replaced by assay medium containing the test compound or calcium chloride at 1.5 mM, as a reference. The NHEKs were incubated for 24 hr before analysis.

Ex vivo: Living human skin explants, obtained from the mammary plasty from a 61-year-old woman, were kept in survival for eight days. The explants were exposed to the same placebo cream and test creams described previously; the latter containing 0.5% shea butter triterpene ester ingredientb. The explants were exposed twice to collagenase (50 U/ mL) and the resulting network of collagen was observed microscopicallyd at 20× and quantified by image analysise.

Anti-inflammatory activity: As shown in Figure 2, a significant 25% reduction in the release of the intracellular pro-inflammatory mediator IL-1α cytokine was observed, in comparison with control cells. This suggested an anti-inflammatory effect of shea butter triterpenes, even at a low 100-500 ppm concentration.

An 84% increase in epidermal thickness for treated explants, over the untreated control, and 26% increase over the placebo was observed (data not shown).33 These results indicate shea butter triterpenes may well contribute to skin barrier strength and protection.

Collagen activity: A significant 6% increase of surface percentage occupied by collagen in the papillary dermis of living human skin explants was observed after six days of treatment with the formulation including 0.5% shea butter triterpenes, as depicted in Figure 3.32, 34 In contrast, no significant increase was observed with the placebo. These results indicate the triterpenes hold collagen-enhancing and regenerating properties.

MMPs: Shea butter triterpene-treated keratinocytes demonstrated a significant (>50%) reduction in MMP-3 expression versus the control at triterpene concentrations as low as 300 ppm and >60% reduction with triterpenes at 600 ppm, as shown in Figure 4. Such gene expression analysis indicates a moderate inhibition effect of the shea butter triterpenes; in order to further elucidate mechanisms and inhibiting activities, further investigations are required.

Ex vivo: The ex vivo study of shea butter triterpene-treated keratinocytes confirmed collagen-protecting activity after exposure to collagenase. The treated explants demonstrated a significant 91% reduction in collagenase activity over the control and versus 21% by the placebo (data not shown).

Overall, the presented data supports the collagen-protecting activity of shea butter triterpenes. Additional studies could indicate a collagen-stimulating effect as well, which has been reported for triterpenes such as madecassoside and asiaticoside, the main active constituents of Centella asiatica.5, 35-37 In addition, shea butter and C. asiatica are known in traditional medicine for wound-healing properties, which could indicate activity on protein synthesis.29, 38

The protease-inhibiting, collagen-enhancing and anti-inflammatory activities of shea butter triterpenes shown here, in vitro and ex vivo, correlate well with published studies on the activities of similar triterpene and triterpene esters. These findings further highlight the enriched shea extract as a potential bioactive lipid complex for protecting the skin against environmental stress conditions and treating aged skin.

The trend today, especially in cosmetics, is for natural and sustainably derived bioactive compounds that serve as lead compounds for skin benefits. Shea butter is a natural choice for formulations aimed at reducing the premature breakdown of skin and supporting the tissue matrix.

Acknowledgements: AAK would like to thank Theresa Callaghan, Ph.D., of Callaghan Consulting International, for fruitful discussions and the preparation of this manuscript.