In June of 2011, the U.S. Food and Drug Administration (FDA) published a Code of Federal Regulations (CFR) on sunscreen1 that states: The record does not currently contain sufficient data to indicate that there is additional clinical benefit above SPF 50. It went on to call for data demonstrating a clinical benefit for products having an SPF higher than 50. Also in June of 2011, the FDA published a request for data and information regarding dosage forms,2 stating that spray forms for sun care products are not approved but are eligible to be approved if adequate studies are submitted showing their effectiveness. The FDA asked for information concerning:

1. How much spray consumers use and what amounts are transferred to skin;
2. How uniform the coverage is;
3. How often users reapply;
4. Whether users follow directions to rub in the product;
5. How rubbing changes effectiveness;
6. How protection levels in actual use compare to laboratory conditions; and
7. Whether testing procedures should be modified to address sprays.

In response to the questions about the clinical benefits of products with SPFs higher than 50, the author’s company submitted test data to the FDA showing that a group of four commercial products with SPFs between 70 and 85 protected better than a group of four commercial products with SPFs from 50 to 55 in outdoor tests.3 Further, some of the questions concerning sprays were answered. During the comment period, Akzo Nobel submitted a comment documenting that users applied more spray than lotion, that uniformity was the same when sprayed or rubbed, and that protection when sprayed or rubbed was equal.4

Some of the data presented5 was based on a consumer use study of 387 subjects, who filled out a one-week diary of their habits. However, taking it a step further, the author’s company sent team members out to walk a busy beach and question users directly, to find out what SPFs and dosage forms were being used and how sprays were applied when used. Their findings are presented here.

Two company staff members, one male and one female, walked an approximate 1.5-mile section of Flagler Beach in Florida, USA, on Sunday of the September Labor Day holiday weekend in 2012. Adult sunscreen users were asked:

• Do you use sunscreens? If so, would you answer a few simple questions for $5?
• Please provide your initials, for identification purposes only.
• Do you have kids?
• What SPF do you use?
• Do you use spray or lotion?
• If spray, do you just spray it on, or do you spray and then rub it in?
• Do you have additional comments?

No one was excluded from the survey unless they appeared to be asleep or judged as being too young to choose their own sunscreen product. The study continued until 101 people were surveyed.

Table 1 shows the survey responses, including preferred brands, while Table 2 summarizes the different SPFs used. Table 3 summarizes the dosage types used—sprays, lotions or other, and Table 4 summarizes how spray users applied the product.

A total of 29 individuals reported using multiple products; 23 used both sprays and lotions. Although not tabulated, it appeared that many times, users of multiple products and multiple SPFs typically used a different product on their face or on children. In a few cases, brand use was reported but most times, this column was left blank as it was not the purpose of the survey; it was only reported if the user volunteered the information. Also not recorded was the observation that approximately six beachgoers approached reported no use of sun care products

The question concerning whether participants had children originally was included to determine whether there was a difference in products used for parents and children. Although the question was asked of all participants for consistency, it became obvious that for the purpose of this study, the question revealed little meaningful data due to the fact that many users were of an age that their children were adults.

It is believed that this sampling of 101 actual beachgoers was enough to obtain useful and realistic information, although it cannot be said with certainty that if the same survey were to be conducted at other times of the year that the results would not be somewhat different. However, when the results presented are compared with a survey reported previously,5 it is interesting to note that some of the spray data appears to be very similar.

The previous study found that the 387 participants had 2,287 product applications, of which 897 or 39% were spray applications. The present study showed that 42% of the products used were sprays. The previous study also showed that 50.6% of spray users sprayed only and did not rub when applying, and this study showed that exactly 50% of spray users did not rub after spraying. Surprisingly, not a single comment was made about any product being irritating, and only one comment was made about sunburn in reference to the product having washed off of children’s faces.

These results indicate that spray dosage forms are frequently used by consumers—42% of the time, based on the 101 individuals surveyed here. Spraying alone, i.e., without rubbing, also is a common method of application. SPFs higher than 50 are frequently used by consumers; approximately 18% used them in this study. Finally, approximately 29% of the sunscreen users surveyed used more than one product.

This study suggests the FDA should note the wide use of both sprays and high SPFs and approve them immediately. Marketing and research specialists should note that since sprays are frequently not rubbed in, despite directions stating otherwise, formulas and packaging should be designed to provide uniform coverage without rubbing. 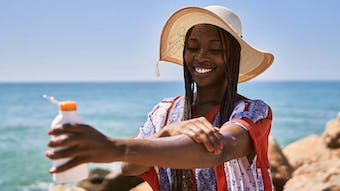