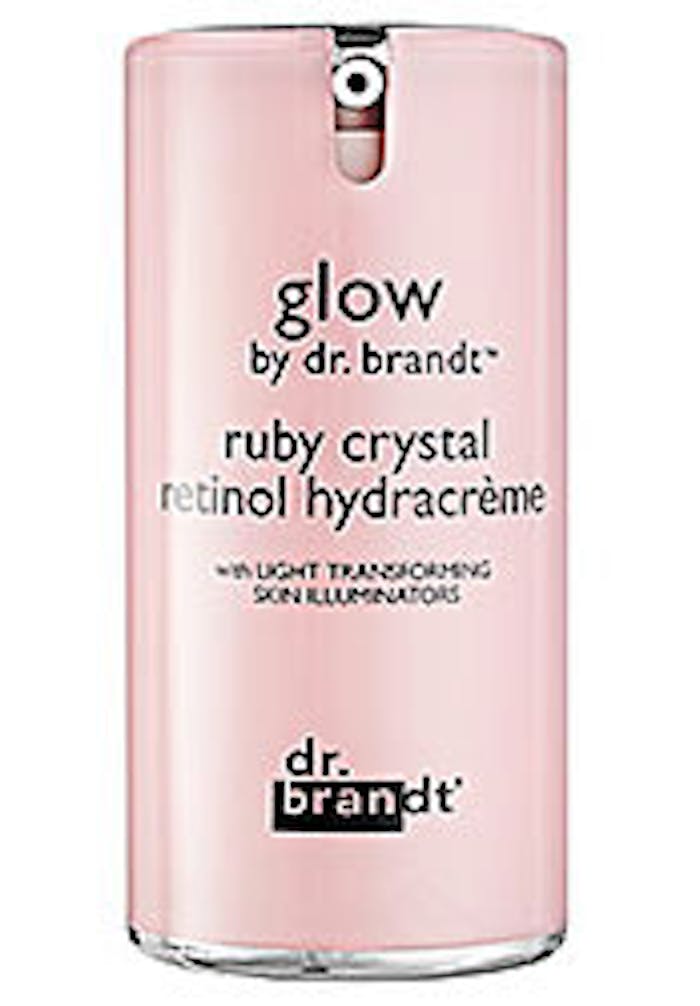 "Transform light into energy?" Dr. Brandt's Glow Ruby Crystal Retinol Hydracrème claims that its micronized ruby crystals possess the same instant complexion enhancing properties as the in-office laser procedures offered by dermatologist Fredric Brandt, MD, the brand's founder. In addition to the crushed precious gemstone (ruby), which is comprised mostly of aluminum oxide with chromium, skin illuminators and optical diffusers in this moisturizer claim to transform light into energy to create a smoother, even look and healthy glowing complexion. While the first successful laser was based on the optical arrangement of ruby, which allows for emissions stimulated by photons to grow in intensity, supporting literature could not be found on the same property for ruby powder. This column will review the ingredient deck for claims support and functionality.

This is a European-type w/o emulsion with caprylic/capric triglycerides, lightweight feel butylene glycol dicaprylate dicaprate and shea butter esters as the emollients. A blend of sodium acrylates copolymer, hydrogenated polyisobutene, phospholipids, polyglyceryl-10 stearate and Helianthus annuus (sunflower) seed oil is the co-emulsifier and gelling agent. Cyclopentasiloxane, a volatile silicone derivative, provides an elegant lightweight finish, and dimethicone and dimethiconol promote spreadability and cushion. Soft, smooth skin is achieved with vinyl dimethicone crosspolymer, silica and behenyl alcohol. The "hydra-balance" claim is supported by the inclusion of the humectants glycerin, honey, pectin and glycine soya sterols.

Ingredients listed after behenyl alcohol are most likely present in the formula at less than 1%. This includes the actives retinol, which increases the cellular renewal rate, and maslinic acid, which counteracts inflammation and protects against oxidative stress. The optical diffusers include the calcium aluminum borosilicate and synthetic fluorphlogopite.

The preservative system does not contain parabens and consists of caprylyl glycol, chlorphenesin and sodium benzoate. There is no fragrance listed; however, citrus nobilis oil, known as mandarin orange essential oil, imparts a fresh citrus note.