A 'Green" Microemulsion for Improved Conditioning Performance of Shampoos

Consumers are more and more interested in living a “green” lifestyle and have come to understand the impact of the products they use on society, the environment and on themselves. Despite this eco-friendly consciousness, however, consumers are generally unwilling to sacrifice product performance; thus, they seek eco-conscious products that provide the same or better performance levels.

Naturally sourced ingredients offer formulators innovative possibilities to develop products that fulfill these consumer expectations by combining performance benefits with environmental compatibility. Modern consumers expect more than one function from a cosmetic product. For example, shampoo should have an appealing appearance—i.e., it should be clear or pearlescent—with good cleansing and hair conditioning properties as well as fast foam generation.

A pearlescent appearance can be achieved by adding well-known pearlescent agents such as glycol distearate; cleansing and foam performance are dominated by the surfactant system, which is usually a synergistic combination of two or more surfactants such as fatty alcohol ether sulfate, cocamidopropyl betaine (CAPB) and alkyl polyglucoside (APG)a.

The most difficult task is to develop a product with the described properties and good hair conditioning performance at the same time. To achieve this, conditioning cationic polymers are used in combination with silicone oils that form a substantive hair gel or coacervate phase during the application.1 While this is a smart technology, it is limited by patents for silicones in cosmetic compositions. Moreover, it is not compatible with the eco-friendly trend.

The present paper describes current research to evaluate whether a nature-based composition can be used to improve hair combability after the hair is washed to increase its compatibility with natural raw materials. This study investigates the conditioning performance of a silicone-free shampoo when a microemulsionbis added to it. The microemulsion is characterized and its effect on the phase behavior of a shampoo is described, followed by hair conditioning performance data.

Emulsions are dispersions of two immiscible liquids such as oil and water. Usually, they are thermodynamically unstable, which means that Ostwald ripening, coalescence and phase separation occur. Thus, these so-called macroemulsions need kinetic stabilization by surfactants, cosurfactants and rheological modifiers.

Microemulsions, on the other hand, are defined as being thermodynamically stable, which can otherwise be achieved only in optimized surfactant, cosurfactant and oil combinations where the interfacial tension is extremely low.2 The result is usually a clear product with a nanosized emulsion structure.

Many different microemulsion systems have been described so far.2 The focus of the present work was to develop a microemulsion based on renewable and nature-based ingredients that is free of ethoxylate and sulfate groups. The starting point was a previously published phase diagram for emulsion compositions that consisted of sodium laureth sulfate (SLES), APG, glycerol monooleate (GMO), dicaprylyl ether and octyl dodecanol.3 In general, a phase diagram represents the appearance of an emulsion based on the interaction between its components. In multicomponent systems, it is necessary to fix some concentrations in order to get a graphical picture; here, the water content is set to 60% (see Figure 1).

Liquid crystalline phases and macro-emulsion regions occur in this phase diagram. In addition, two regions where microemulsions are formed can be seen. In the lower left corner of Figure 1, where there is maximum surfactant content, the oil is solubilized. It is interesting how the other region is shifted toward the center of the phase diagram, which means that a higher amount of oil is incorporated into the microemulsion.

To achieve a microemulsion with a high oil content, the addition of the synergistic cosurfactant, glycerol monooleate, is necessary. However, the development of a “green” shampoo formula with a natural-based microemulsion requires a different surfactant than SLES because its raw material base is partly originated from petrochemical products.

This surfactant exchange has an influence on the hydrophilic-lipophilic balance of the whole system. Therefore, the system must be counterbalanced by making the oil phase less polar. This can be achieved by taking out the octyl dodecanol. The result of this approach is a clear, eco-friendly microemulsion that is based only on APG, GMO and dicaprylyl ether (see Figure 2).

If a bright, LED light beam is passed through the sample, a blue light scattering effect can be seen (the Tyndall effect). This is due to the nanosized structure of the microemulsion, which has an average particle size of less than 100 nm.

The raw material bases for these substances are vegetable oil and starch. The active matter of this microemulsion is approximately 44–48%; the pH is set to 3.8–4.5, which fits well with modern shampoo formulations. This microemulsion also is compatible with standard surfactant systems for shampoos, such as SLES and CAPB. For example, it can be added in any ratio to a 12% SLES/CAPB (3:1) solution. The addition is possible in a cold process and gentle stirring is enough to produce a clear final product.

These shampoos exhibit a phase transition during application by the consumer. On dilution during washing, the one-phase micellar solution of the shampoo crosses a phase boundary to a two-phase region where a second gel phase is formed.4 A microscopy image of this phase is shown in Figure 3.

Thus, the decrease of the transmittance on dilution is a measure for the formation of a turbid phase. The following discussion examines how the phase separation of shampoos during their application is influenced by the addition of the microemulsion.

The shampoo base tested is shown in Formula 1. SLES and CAPB were used as the surfactant base, and salt and a polymer were used for thickening purposes. The cationic polymer PQ-10 is a standard polymer used in shampoos. Different levels (1–6%) of the described microemulsion were added to this shampoo; for comparision a shampoo without microemulsion was also tested. To investigate the phase behavior of these formulas, the following procedure was used: to 30 mL of the shampoo, initially 15 mL of deionized water was added, at which point all shampoos stayed clear. Then, titration with water as described in the experimental setup above was initiated. Results from these shampoos are shown in Figure 4.

The horizontal axis of this graph shows the amount of added water; the vertical axis shows the transmittance of the sample. For all tested shampoos, the same general pattern can be seen. With the addition of up to 25 mL of water, the shampoo remains clear; after further addition of water, a sharp decrease in the transmittance can be seen, which indicates the formation of a gel phase. For all shampoos, the minimal transmittance was reached at the addition of approximately 60–65 mL of water. This equals a dilution of the shampoo by a factor of 3.0–3.2.

Conditioning of Shampoos with Microemulsion

Next, the wet-combing performance of standard shampoos with the microemulsion was investigated (see Formula 1). The wet-combing performance was determined using an automated system, as shown in Figure 5. Ten dark brown European hair strands per shampoo formulation were bleached with hydrogen peroxide and baseline combing forces were recorded. From the force versus path curves of the comb through the hair, the combing work was calculated by integration. The combing forces and work of treated hair strands were determined after a twofold application of 0.25 g shampoo per 1 g hair with standardized rinsing in between and after the second application. For each strand, the residual combing work was calculated according to:

Table 1 shows the results for the residual combing work of standard shampoos with different levels of the microemulsion.

To test the effects of the microemulsion on an eco-friendly formula’s stability, a different shampoo base was developed (see Formula 2). The stability was evaluated by a three-month storage test at 5°C, room temperature and 40°C. During this period the samples were visually checked for phase separations. In contrast to the first formula, this formula incorporates surfactants and a cationic polymer that are free of ethoxylated groups. The stability results of shampoos with increasing amounts of the microemulsion are shown in Table 3.

Addition of the described eco-friendly microemulsion to a shampoo base was shown to improve its performance and conditioning properties. However, although it is also possible to formulate eco-friendly shampoo variants with improved performance, the authors note that performance levels did not reach those of an SLES/CAPB/PQ-10 shampoo. Thus it is suggested that in the end, the decision is up to consumers regarding how “green” they want to be and how much performance they expect from a product. For manufacturers interested in developing products with good performance that are highly nature-based, the addition of the described microemulsion offers a viable option.

a APG is a registered trademark of Cognis GmbH. It is also a commonly used abbreviation for alkyl polyglucoside in the personal care industry and beyond, and it is in that common use sense that it appears in this article.

b Plantasil Micro (INCI: Dicaprylyl Ether (and) Decyl Glucoside (and) Glyceryl Oleate) is a product of Cognis GmbH, Monheim, Germany.

c The experimental setup used, T50, is from Mettler Toledo in Germany. 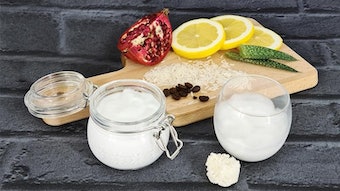