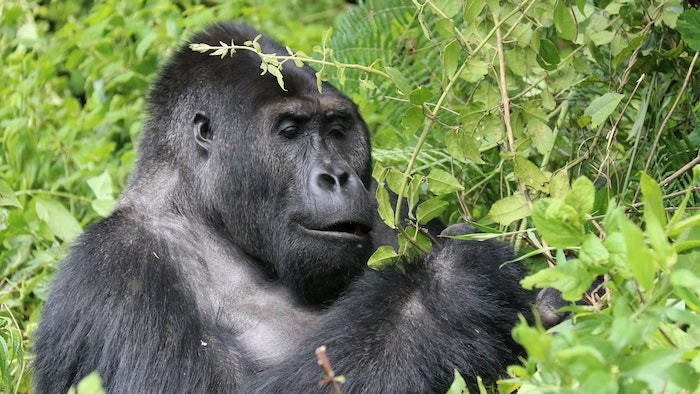 The observation of the western lowland gorilla is at the origin of Phyt’anim Grains of Paradise to relieve skin in a state of chronic inflammation.
Image source: Seqens Cosmetics

The Etho-Phytology innovation platform fits into the scientific landscape of biomimicry, an approach that aims to find sustainable solutions by imitating models and strategies proven in nature. According to the company, observations of the western lowland gorilla are at the origin of Phyt’anim Grains of Paradise ingredient, designed to relieve skin in a state of chronic inflammation.

Seqens Cosmetics was interested in this animal and its consumption of grains of paradise, also known as melegueta pepper (Aframomum melegueta). This plant reportedly protects the myocardium of the gorilla by fighting against certain inflammatory disorders (via the COX-2 pathway) that cause fibrosing cardiomyopathy.

Research in zoopharmacognosy, the idea that humans and animals alike can self-heal, showed that for captive primates, a lack of access to grains of paradise led to a sharp increase in this pathology. Aware of the importance of this same COX-2 pathway at the level of skin inflammation, Seqens Cosmetics studied the effects of this seed on a skin model and extracted the seed's anti-inflammatory fraction, enriched with 6-gingerol.

Phyt’anim Grains of Paradise was reportedly shown to relieve irritated skin and accelerate the resolution of chronic inflammation in vitro, ex vivo and clinically. By readjusting the balance between pro-inflammatory mediators (COX-2, IL-22, FPR2) and anti-inflammatory mediators (IL-10, TGF-β), Phyt’anim Grains of Paradise reduces visible signs of skin inflammation. Further, in a double-blind clinical study on irritated skin, the ingredient was found to reduce transepidermal water loss (TEWL) after 24 hr more effectively than the placebo, and to reduce redness and vascular intensity five days.

Sequens also sought to understand how primates select plants in their environment. Taste receptors are crucial in signaling to the animal the presence of molecules necessary for its survival (sugars, for example) or on the contrary, that are toxic (certain alkaloids being bitter). This is particularly true for the gorilla whose diet is essentially herbivorous.

Noting the presence of these same taste receptors on the skin, Seqens Cosmetics evaluated the impact of Phyt’anim Grains of Paradise on this skin axis. The results obtained reportedly proved that the active ingredient modulates the expression of a G protein associated with a taste receptor during inflammation.

This work elucidates the role of the receptors at the skin level and demonstrates the importance of considering them in dermo-cosmetics. Other cases of self-medication behavior, in species other than primates, are currently being explored at Seqens Cosmetics to produce additional bio-inspired cosmetic actives.