Mibelle Turns Up the Heat on Cellulite 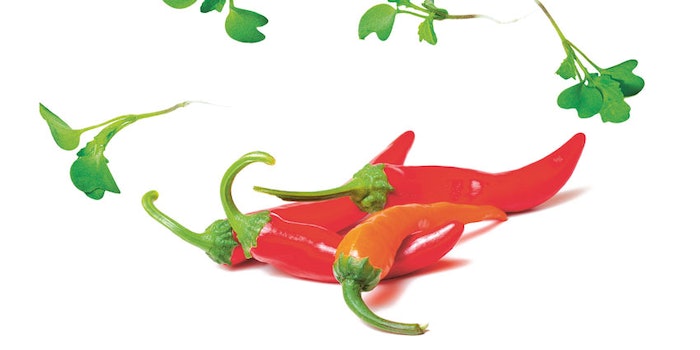 ShapePerfection (INCI: Brassica Alba Sprout Extract (and) Capsaicin (and) Caprylic/Capric Triglyceride) is a new lipo-soluble, anti-cellulite ingredient from Mibelle Biochemistry. It is based on a purified extract of organic mustard sprouts combined with natural capsaicin.

How does it work? According to the company, until about five years ago, scientists believed adult fat tissue consisted only of white adipose tissue (WAT), which stores lipids. Human infants also produce brown adipose tissue (BAT), which is programmed to burn lipids as heat via the activation of the UCP1 gene. In the mitochondria, this protein uncouples the energy production chain to create heat.

Unfortunately, fat tissue in adults mainly consists of WAT. However, new findings reveal that white adipocytes, upon activation, can transform into brown-like adipocytes. Based on these findings, Mibelle Biochemistry developed its new slimming ingredient.

The two vasodilators in the active—an organic sprout extract from the Brassica alba spicy mustard species, and natural capsaicin from chili peppers—induce the browning of adipocytes. By activating microcirculation, they fight water retention and “empty” the cells of adipose tissue, converting fat-accumulating adipocytes into cells that actively burn fat.

Eight-week clinical studies showed the active ingredient imparted rapid, significant and visible slimming and anti-cellulite effects. The ingredient is recommended at 1–2% in slimming formulations. It can be formulated in o/w and w/o emulsions, all types of oil-based products and water-free formulations. It is stable at temperatures up to 80°C for short periods.