Conditioning Damaged Hair Around the Globe 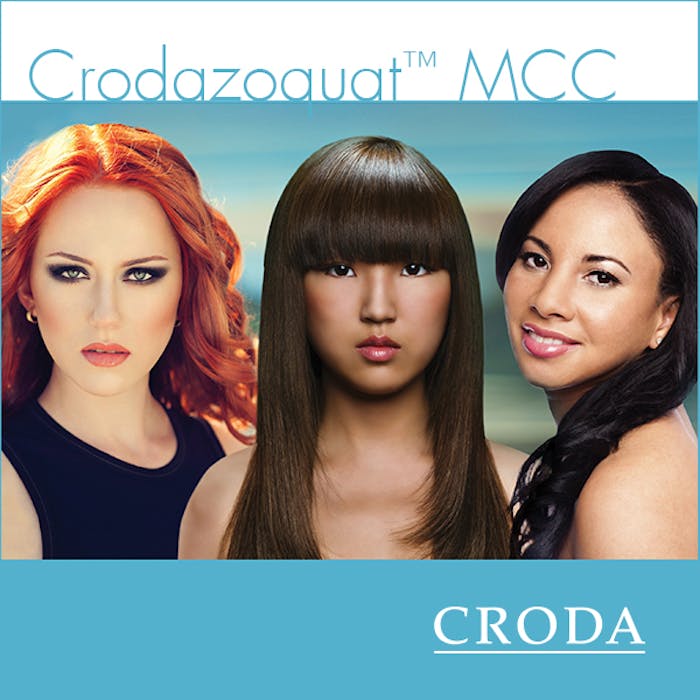 As consumers around the world continue to damage their hair by using thermal styling tools, chemical processes or colorants, restoring hair to a healthy state is consequently a primary consumer need. Supporting this need globally, 42% of new conditioner and treatment products launched in 2013 used claims for damaged hair.2 Moreover, use of claims for damaged hair in conditioner and treatment products globally grew by 40% over the last four years.3

Although there is a demonstrated need for damaged hair products around the world, it can be challenging to formulate for different ethnic groups with their own unique hair characteristics. Variations in ethnic hair include style (e.g., straight, wavy, curly), shape (oval, flat, round), cuticle size distribution and oiliness.

The need for a universal conditioning agent across ethnicities led Croda to develop Crodazoquat™ MCC (INCI: Behentrimonium Methosulfate (and) Quaternium-87 (and) Cetearyl Alcohol), a conditioning agent that is able to improve the appearance, feel and manageability of hair regardless of ethnic origin.

Healthy, undamaged hair is conditioned and hydrophobic (water repelling), but hair becomes more hydrophilic (water loving) when damaged through chemical, mechanical, or environmental sources that deplete lipids from the hair and strip the cuticle of its natural conditioning. Consumers need to restore damaged hair to a healthy state to improve its manageability and aesthetics. If hair can be restored to a more hydrophobic state, it can be considered healthier.

The dynamic advancing contact angle is a measurement used to determine the hydrophobicity of hair. If this measurement increases, it can be concluded that hydrophobicity has increased and hair has become healthier. As the variations in different hair ethnicities can cause performance differences in hair care ingredients, efficacy testing on different ethnic hair types is important. In a study including hair fibers of three different ethnic origins before and after treatment with 1.5% active Crodazoquat MCC in a conditioner, an increase in the average advancing dynamic contact angle was observed on colored Asian hair, bleached Caucasian hair and relaxed Brazilian hair (see Figure 1). From these results, it can be concluded that Crodazoquat MCC has improved the surface hydrophobicity of hair that had been damaged by the coloring, bleaching or relaxing process, resulting in hair that has been restored to a healthier state.

A reduction in combing force, the force required to move a comb through a wet or dry hair tress, indicates how well a product is conditioning and detangling the hair. Wet and dry combing study results reveal excellent detangling and conditioning from Crodazoquat MCC, measured by up to a 95% reduction in combing force on colored Asian, bleached Caucasian and relaxed Brazilian hair.

Consumers often associate shiny hair with healthy hair. Accordingly, hair shine is a desired consumer attribute, particularly when the hair has been damaged.

The measurement of shine on the surface of hair is complex. Croda adapted a methodology to measure shine on the hair’s surface that utilizes the Hair Shine Imaging System (SAMBA) equipment from Bossa Nova Technologies.4 This methodology determines the apparent cuticle angle calculated from angle differences obtained from root to tip and tip to root measurements. The smaller the angle differences, the lower the apparent cuticle angle and the smoother the hair’s surface. The smoother the hair’s surface, the stronger the reflected light intensity and the better the shine or luster. The SAMBA hair imaging system allows calculation of the Luster (L) index of the hair.

Brand owners are increasingly seeking to market and manufacture their products in the global market space, so ingredients with broad regulatory acceptance provide formulating flexibility. Crodazoquat MCC has broad regulatory acceptance (EINECS, REACH, and DSL compliant; IECIC and IECSC listed), which combined with its multicultural hair effectiveness makes it an excellent choice--whether formulating for Asia Pacific, Latin America, North America, Europe or around the world.

Any trademarks identified herein, unless otherwise noted, are trademarks of the Croda group of companies.

Hydration is one of the most basic skin care benefits, according to Hemali Gunt, Ph.D., of Burt's Bees, in this interview. Here, she describes research on three naturals, which are shown to provide both hydration and barrier protection. Listen now; it's free.
Jul 14th, 2021