Extremolyte for Antiaging and After-sun

Jan Dekker has launched an antiaging ingredient based on a high level of the pure extremolyte 2-O-alpha-D-glucopyranosylglycerin. Glycoin Extremium (INCI: Glycoin (and) water (aqua)) increases the stress resistance of skin cells. Glycoin is an extremolyte, originally found in salt-tolerant cyanobacterias such as blue algae.

Extremolytes are known as stress protection molecules, usually found in extremophilic microorganisms. These microorganisms survive under extreme and harsh conditions. The company's extremolyte-based ingredient is said to protect, revitalize and rejuvenate human skin.

In addition to slowing down the decrease in elasticity of the dermis, the ingredient is said to thicken the epidermis and increase the antioxidant power of skin cells. In vivo tests conducted by the company show the ingredient slowing the keratinization process but boosting the cell renewal in the epidermis. An in vivo test of a twice-daily application of a cream containing 2% of the ingredient for 28 days showed a 23.3% increase in skin moisture, a 93.3% increase in skin elasticity and a 61.8% increase in skin smoothness compared to a placebo cream. The placebo cream contained 25.5% petrolatum and 10% propylene glycol. The company also conducted an anti-erythema study where 2% of the ingredient was added to after sun care products. Measurements of erythema intensity were done 48 hours after an initial UV irradiation followed by three applications of test or placebo creams. Results showed a reduction of the red blood cells concentration in the skin treated with the company's ingredient compared to untreated skin. Therefore, the company concluded that the ingredient had a soothing effect on sun burn.

The ingredient is recommended for antiaging products and sun care products; however, the company also notes the ingredient can be formulated into face creams and color cosmetic products that tout antiaging benefits. 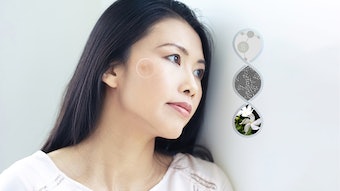