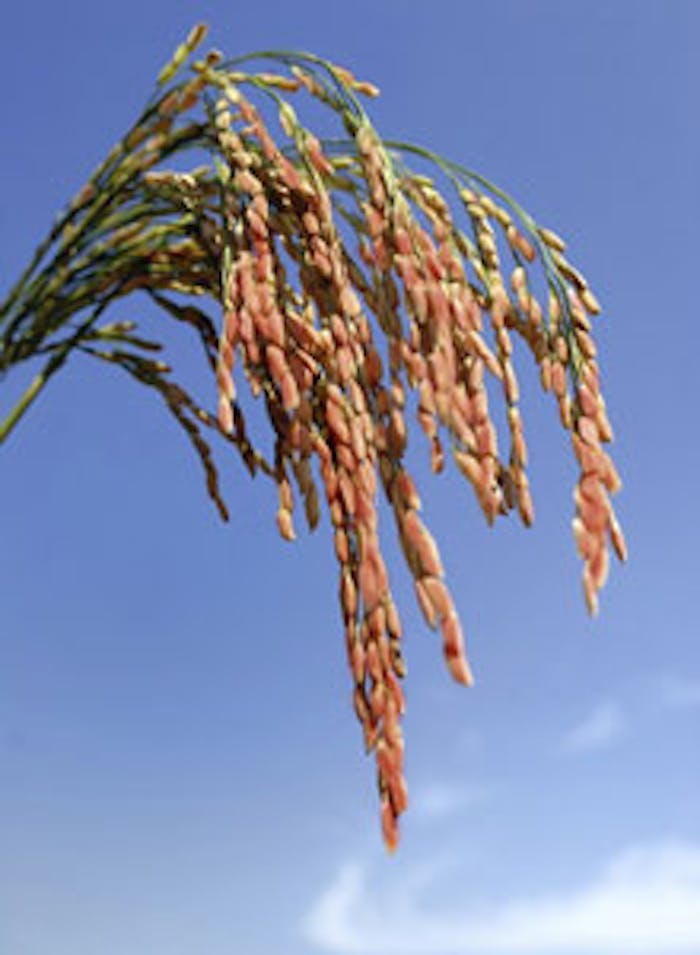 ReGeniStem™ Red Rice (INCI: Ozonized Oryza Sativa (Rice) Callus Culture Extract) was produced by harnessing the power of undifferentiated plant cells through elicitation, as shown in Figure 1. Meristem cells of Himalayan red rice were cultured using the method detailed in Figure 2. These cells are grown in a bioreactor and subjected to an ozone stress, which causes them to produce secondary metabolites. Through an in vitro assay, rejuvenation was shown at the epigenetic level of treated cells. An increased expression of dermatopontin in keratinocytes, besides being a novel finding, implies that ReGeniStem™ Red Rice may be able to firm the skin and improve the skin barrier function.

High performance liquid chromatography (HPLC) analysis was conducted on the meristem conditioned nutrient media exposed to ozone. Although only one peak has been identified at this time as biotin, multiple peaks were observed in the extract, demonstrating that exposure to ozone causes the production of secondary metabolites by the rice meristem culture. These differences are clearly seen in the chromatograms in Figure 3 and Figure 4.

DNA Methylation as a Type of Epigenetic Modification

Epigenetics is the study of heritable changes in gene expression that is caused by a mechanism other than changes to the DNA sequence. Epigenetic factors and changes have been shown to play an important part in cellular differentiation, development, aging and disease.5-7 DNA methylation in regards to epigenetic changes occurs at the cytosine-5 in CpG dinucleotides. The p represents the phosphate that links the cytosine and guanine together. This helps differentiate CpG from a CG base pair. Methylation of the CpG-rich promoter areas of genes has been identified as an essential mechanism in the regulation of gene transcription.7, 8 For humans, promoters tend to gain methylation with age. This trend can be seen when viewing the variation in methylation in regards to aging and environmental exposure to toxins such as exposure to smoking, arsenic or asbestos.9-14

Epigenetics can be thought of as a “youth switch.” The switch is turned on in young cells and turned off as cells age. DNA methylation could also be considered as a stop sign in gene promoters, as shown in Figure 5. Young healthy cells are thought to maintain their CpG sites in a low methylated state to allow transcription to occur. Less methylation is fewer stop signs to prevent the gene from being expressed. As aging occurs and DNA methylation drift increases the amount of DNA promoter methylation, the gene is expressed less causing lower protein production. Undifferentiated plant cells may help reverse promoter methylation. There may be various plant transcription factors, cellular components and homologous proteins and peptides that may be able to be applied to aged skin and help the skin cells to rejuvenate by decreasing promoter DNA methylation (see Figure 6). By profiling the CpG methylation differences in young and aged skin tissues, characterization of the role of aging related to methylation variation can be observed.

The resulting data consisted of three sets of approximately 250,000 CpG sites each. Since interest lied in the change of methylation at the promoter level, all CpG sites within all promoters were analyzed, as shown in Graph 1. As expected, there is an increase of global methylation at the promoter level when comparing young cells to old cells, both without ReGeniStem™ Red Rice. The application of 2% w/w ReGeniStem™ Red Rice to old cells had the ability to modulate the epigenetic environment and decrease the global level of promoter methylation, perhaps helping the old cells to function and perform as a younger, healthier cell.

CpG Methylation at Collagen 1A1 (COL1A1) Gene and Pro-collagen 1 Protein Synthesis: When COL1A1 was examined for its promoter methylation levels, the resulting data showed that treatment with 2% ReGeniStem™ Red Rice also reduces CpG methylation at the COL1A1 promoter region on treated aged cells, as depicted in Graph 2.

To correlate DNA demethylation to Collagen 1A synthesis, a protein assay was conducted on human fibroblasts treated with and without 2% w/w ReGeniStem™ Red Rice. The results shown in Graph 3 confirm that treatment with 2% ReGeniStem™ Red Rice increases collagen synthesis in cells when compared to old untreated cells.

Dermatopontin Expression in Keratinocytes: Dermatopontin is a protein found in the extracellular matrix of the dermis. It is known to have multiple and diverse functions in the cells ranging from accelerating collagen fibrillogenesis to fibroblast and neurogenic cell adhesion.15

Growing ReGeniStem™ Red Rice in bioreactors is a sustainable process that reduces residual biomass waste, but the benefits of this technology are not limited to environmental impact. Through elicitation of red rice meristematic cell cultures, appreciable quantities of secondary metabolites were produced in the culture. When the culture was tested on fibroblasts in vitro, a reverse in the age related increase of methylation in the promoter region of genes was shown.

This rejuvenation at the epigenetic level may have multiple benefits to the cells and to the skin. Some benefits include anti-aging, the renewal of gene and protein expression levels to that found in younger cells, such as was shown for collagen and the reversal of age related decreases in protein production. In essence, the skin, through an application of ReGeniStem™ Red Rice, is pushed to a younger, healthier state. An increased expression of dermatopontin in keratinocytes, besides being a novel finding, implies that ReGeniStem™ Red Rice may be able to firm the skin and improve the skin barrier function.